The following Read and Wonder Books (a series recommended for ages 5-8) have been reviewed by regular contributor Debbie Glade. 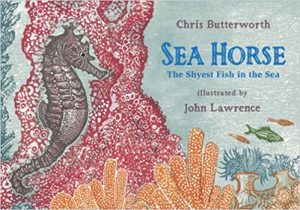 Sea Horse: The Shyest Fish in the Sea by Chris Butterworth, illustrated by John Lawrence, is a wonderful educational journey through the life of a Barbour’s Seahorse. Until I saw all the illustrations of the different types of seahorses, I never knew how many different species there were. The book explains the life cycle of a seahorse from mating to birth and the survival of the tiny babies. The unique illustrations are an excellent complement to the story. Any child interested in animals or the ocean would love learning about the seahorse in this enlightening book. 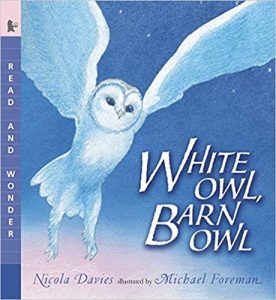 White Owl, Barn Owl by Nicola Davies is both an entertaining and educational story about barn owls told through the perspective of a little girl. The girl’s grandfather builds a nest box in a tree, and the two of them wait patiently for a barn owl to move inside. The misty illustrations of owls in the night by award-winning illustrator, Michael Foreman, are outstanding. What I like about the story is that the author weaves in educational facts about barn owls with handwritten notes on the illustrations. The author even tells the reader where to go to get information bout making a barn owl box. I love owls, and I love this book. 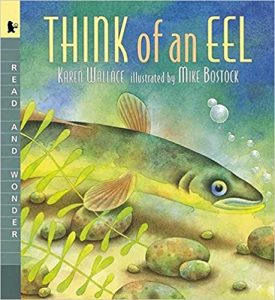 you know that young eels are see-through or that eels can breathe out of water for up to 2 days? You will learn about this and many other facts about eels when you read the book and listen to the CD, Think of an Eel by Karen Wallace. The book teaches kids about the life of an eel as he thrives in the ocean south of Bermuda. You’ll love looking at the watercolor illustrations by Mike Bostock as you read this book. The CD that comes with the book provides you with a read-along version as well as facts about eels. What a great addition this makes to the book! There’s nothing better than a children’s book that educates the parents too. I really enjoyed learning about the life of an eel, and I am sure you and your kids will too.

Today’s guest reviewer is author, Esther Jantzen.  Her new book, Plus It! How to Easily Turn Everyday Activities into Learning Adventures for Kids shows parents just how to do that. You can check it out at <www.plusitbook.com>. and read Jantzen’s article in our Fall 2009 Education Directory available online.

Did you ever wish you had an older sister? Zelda and Ivy: Keeping Secrets written and illustrated by Laura McGee Kvasnosky (Candlewick Press, 2009) can give you a taste of what that might be like.

The two charming fox sisters, who have appeared in four other books, experience plenty of the rivalry that often occurs between siblings. Sometimes older sisters can be bossy, sometimes they might try to trick you, sometimes they like to show off. And sometimes younger sisters figure out smart ways to take care of themselves without fighting or complaining.

This book, with three short chapters, is for the 5–8-year-old set. With the benefit of engaging illustrations, we first learn how Zelda sets up Ivy and her friend Eugene to test whether they can keep woozy-weasel-promised secrets. (Well, it’s very challenging…)

In the second chapter, we see how April Fools jokes can be played by the big sister AND by the little sister. And the final chapter depicts a marvelous attempt by Zelda to stage an opera when those around her are more intent on catching butterflies. One just might end up with empathy for both the elder and the younger. It’s not easy being Sis!

Meet Rebecca, An American Girl by Jacqueline Dembar Greene and illustrated by Robert Hunt, with vignettes by Susan McAliley.

Today’s Guest Reviewers are playwright/screenwriter Jennifer Maisel, whose work includes the critically acclaimed plays The Last Seder and There or Here (www.dogear.org) and the hit web series Faux Baby, and her almost 7 year old daughter, Julia, a first grader who is a big fan of American Girls, and just may be a singer-songwriter when she grows up.

As a child I was a big fan of Sydney Taylor’s All-of-a-Kind Family series, about a Jewish family with five daughters living on the Lower East Side of New York at the turn of the century; recently Julia dug up one of my dog-eared copies of the book and we started in, pleased the writing held up for a new generation for readers. It seemed to be a nice synchronicity when the news came of American Girl’s newest history doll launching May 31 – 9 year old Rebecca Rubin, a Jewish girl living on the Lower East side with her four

siblings in 1914 – and Meet Rebecca landed on our doorstep. And indeed there are marked similarities between the two series, both giving vivid pictures of the life of Jewish immigrant girls, yet not getting too much into the gritty details of the period.

As in other American Girl books, our main character faces a personal moral dilemma that is steeped in the historical milieu of the time. Rebecca’s family has close relatives that need to leave Russia but do not have the money to do so, and Rebecca’s family cannot easily afford to bring them over. Rebecca, however, is most concerned with being considered too young to light the Sabbath candles and searches for a way to stand out amongst her four siblings – something children of any generation can relate to. Rebecca hits on an ingenious way to earn money to buy her own candlesticks, but realizes, as time goes on, that perhaps the objects she longs for will not satisfy her as much as helping others could.

It’s a sweet story and Dembar Greene portrays the inner workings of a nine year old’s mind in a relatable way that kept my daughter eager for the next chapter. Julia thinks the person who thought this character up is our own “Clever Karina” (you’ll have to read the book to find out.) There are a lot of religious and cultural mores that Dembar Greene, for the most part, manages to deftly cover while keeping Rebecca’s journey in the forefront. I wished, however, that she had addressed the generational clash of concerns about the father in the family working on the Sabbath despite the grandparents’ disapproval more extensively – it was covered better in the Looking Back, America in 1914 chapter after Rebecca’s story was completed. But any book that opens my daughter’s eyes to trials her great grandparents went through when they came to this country and gets her slacker parents to celebrate Shabbat (at her insistence) has something going for it.

When my seven year-old Coleman needs a good giggle, I know just what book to give him.  Any book starring beloved character Judy Moody’s younger brother Stink is guaranteed to bring a broad grin to my son’s face. In fact, he’ll take the book and read it cover to cover in one sitting, it’s just that good.  Today he slunk down into the sofa and read to himself for at least one half hour (and who can argue with that kind of staying power?) and returned with this review.

Stink-o-pedia: Super Stink-y Stuff from A-Zzzzz by Megan McDonald, illustrated by Peter H. Reynolds is full of fun facts.  It has practical jokes and stuff that makes you laugh.  It’s written in alphabetical order, too, so you can go right to the letter H and look up something.  Did you know that Hippos don’t sweat, they slime?  And, the slime acts like a suntan lotion!  Coleman told me there are less words than in a dictionary, but all the descriptions are from Stink’s point of view. I could not believe how many pages he dog-eared to show his friends at lunch tomorrow.  One thing’s for certain, I’ll be having a good look-see at all those folded back pages tonight to find out why he asked me if we had any Superglue in the house …