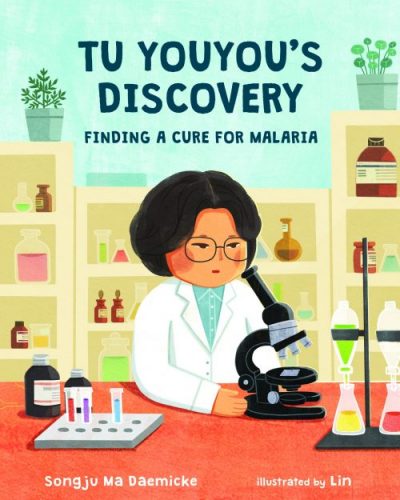 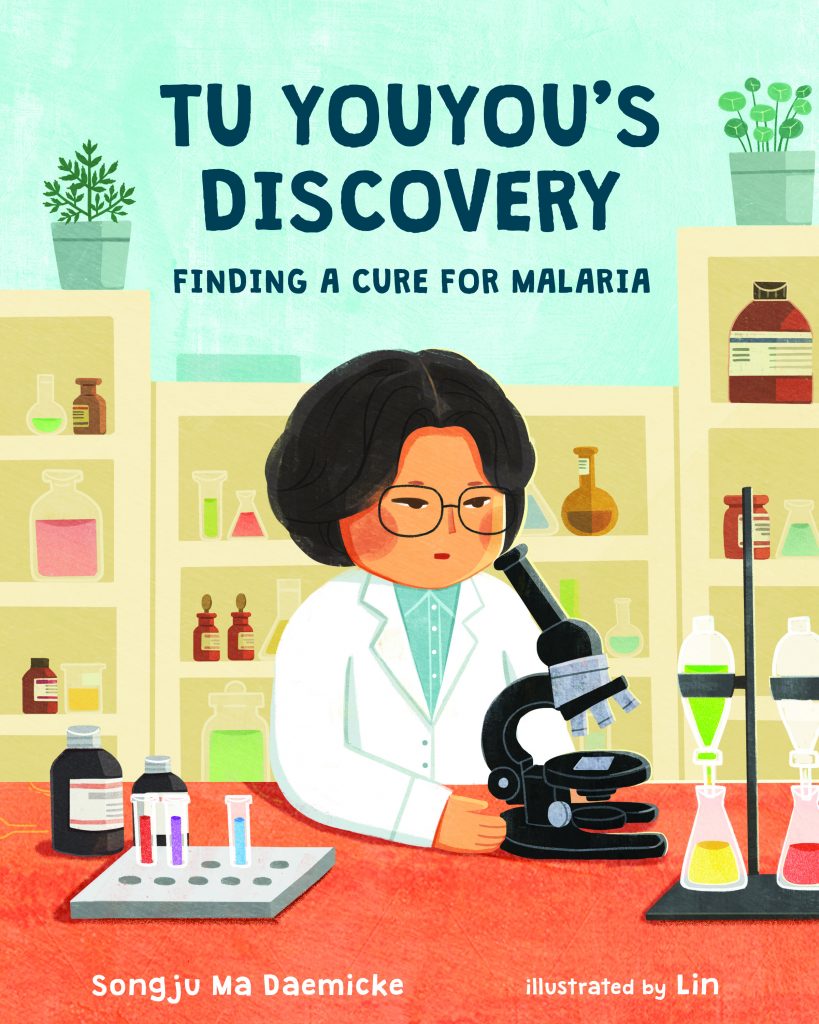 In 2021 malaria is a preventable and treatable disease but it wasn’t always the case. Hundreds of thousands used to die from it annually but the mortality rate has declined since the medicine to cure it was approved. That’s why I was curious to read about Tu Youyou, the woman whose determination led to finding a cure for malaria and becoming the first Chinese woman to win a Nobel Prize.

In Tu Youyou’s Discovery written by Songju Ma Daemicke with art by Lin, readers are brought back in time to Beijing, China in the 1930s. Youyou attended school when most girls her age stayed home but contracted tuberculosis as a teenager and had to drop out.

Fortunately, she survived due to antibiotics prescribed by her physician but was greatly weakened. A steady diet of “her mother’s herb soups slowly nursed her back to full strength.” This sparked her interest in how both “modern and traditional” medicines had helped her get well. Always a compassionate person, Youyou chose to pursue a career in science in order to help save lives. Little did she know then what a major contribution she would ultimately make when in 1969 malaria, like Covid-19 now, swept across the world bringing death in its path. After graduating from Peking University, “in 1955” she “became a researcher at the China Academy of Traditional Chinese Medicine in Beijing.” As part of a research group, Youyou was determined to find a cure for malaria and was in the right place at just the right time.

Youyou traveled around the country to document cases in hopes of gaining new insight into the disease. She found it when she met a farmer who had cured his own high fever by eating a local plant called qinghao, known in English as sweet wormwood. In her lab, she and her team tried various methods to create a cure using the qinghao, but nothing worked. However, Youyou did not give up. Despite little to no funding for the latest equipment, Youyou’s team performed experiment after experiment with no luck.

Then what appeared to be a breakthrough came from an unexpected place. Studying her family’s indispensable “A Handbook of Prescriptions for Emergencies, an ancient Chinese remedy book,” Youyou revisited the qinhao remedy only to realize that the book recommended just soaking the herb in water when all along her team had been boiling it. Perhaps the healing part of the plant had been destroyed during the experiments. Much to her dismay, this too yielded no results. Again, Youyou persevered. Many male colleagues had questioned her commitment to traditional medicine but “After 190 unsuccessful experiments, the test result of sample 191 stunned the team.” Sample 191 completely killed the parasites and so in 1971 a successful cure had been found. And while Youyou initially credited her entire team in research papers, over time “other scientists finally realized how involved she had been in the discovery.” In October of 2015, Tu Youyou was awarded the Nobel Prize in Medicine at a ceremony in Stockholm, Sweden. Her commitment to finding a cure for malaria has saved millions of lives and continues to do so to this day.

I’m so glad Songju has introduced Tu Youyou to me and to children in such an accessible way. I felt as if, despite knowing the outcome, that I was right alongside a detective solving a mystery. This nonfiction picture book bio provides engaging STEM reading for budding scientists, doctors, and inventors and puts Youyou’s name up there alongside other women in STEM history makers such as Marie Curie, Marie Maynard Daly, and Ada Byron Lovelace. Lin’s nice use of contrasting flat color palettes creates bright illustrations that have a print-making quality to them. Songju shares how labor-intensive the six steps of the scientific method are (see back matter for this info) but also how crucial. While not all experiments yield life-changing results, Youyou’s story is a great example of how teamwork and not giving up can make a difference. I was surprised to learn in the Author’s Note that although the first clinical trials for the malaria medicine known as artemisinin took place in 1972, it wasn’t until 1986 that the drug gained approval from the Chinese government and started being used around the globe.