SAINT ANYTHING
Written by Sarah Dessen
(Viking Books for Young Readers; $19.99, Ages 14 and up) 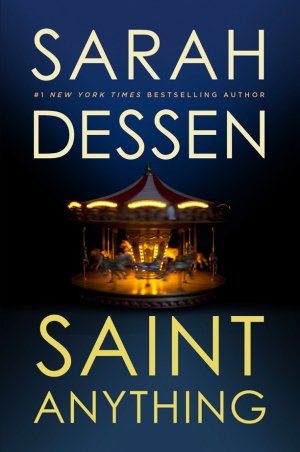 Sarah Dessen’s many fans won’t need to be cajoled past the slow start of her new YA novel, SAINT ANYTHING (May 2015, Viking; $19.99). New Dessen readers, however, should know that the beginning is there to provide contrast, like the black-and-white opening of the Wizard of Oz movie. The detached vibe reflects how main character Sydney Stanford’s home life feels until she meets the Chatham family. The Chathams and their restaurant Seaside Pizza are full of warmth, acceptance, and music, and the pace of the book picks up as soon as the family appears. Layla Chatham becomes Sydney’s new best friend. Since she has a big sister who is a skating-star-turned-drug-addict, Layla understands what it’s like for Sydney now that her brother Peyton is in prison. Peyton was the Stanford family’s “Golden Child” before he drove drunk and crashed into a pedestrian.

Layla invites Sydney to join her group of friends, which includes her brother Mac. They all hang out at Seaside after school, eating pizza and practicing retro pop covers for an upcoming band showcase. Sydney feels herself falling for Mac, despite Layla’s warning that she can’t abide her friends dating her brother. But how can you draw a line between friendship and romance when you meet the right guy? The times Sydney and Mac find to be alone — usually while delivering pizza in Mac’s not-so-reliable old truck — are some of my favorite moments in the book. I enjoyed reliving the sweet excitement of a potential new relationship. I also related to Sydney’s discomfort when her brother’s friend keeps popping up to hang out with her, especially when her parents aren’t around. It’s hard to ask for help when an older guy creeps you out for reasons you can’t name and therefore can’t report.

The heart of the book for me centers on Sydney’s feeling of guilt about the young teen, David Ibarra, her brother Peyton injured. Sydney learns everything she can about David’s life before and after the accident. A friendly, caring guy nicknamed “Brother,” he’s going to be in a wheelchair for life, and Sydney feels like she’s the only person in the family wanting to make amends. Her mother, Julie, only thinks about Peyton and how the aftermath of the accident affects him. As a parent, I laughed out loud as Julie, stuck in helicopter-parent mode, tries to organize families of Peyton’s fellow prisoners as if she were the president of a prison PTA. I was touched, though, when Sydney and Peyton start talking on the phone, finally getting to know each other as individuals outside of their family roles, ready to take responsibility for their own lives.

SAINT ANYTHING is peopled with teens who feel real, none of them perfect and all of them passionate about something, whether music, school, or French fries. The book is a comfortable place to hang out even while facing uncomfortable situations with the more caricature-like adults. I recommend this book to fellow fans of quiet YA, those of us who’d like to peek inside a house when delivering a pizza, trying to figure out what life’s like behind that half-open door.