In this stunning sequel to Hartman’s first book, Seraphina, the author revisits the kingdom of Goredd. In the previous book the court musician, Seraphina, had to come to terms with the stigma surrounding her half dragon, half human ancestry. This book begins with Seraphina’s search for others of her kind, called the ityasaari. Seraphina hopes that gathering all the ityasaari together will help to protect the kingdom from the ongoing dragon-against-dragon wars. To find the other ityasaari, Seraphina must journey through many different kingdoms. However, with every ityasaari found, she comes closer to being controlled by one of her own. Jannoula, a powerful and highly manipulative half dragon, tries again and again to gain control of the minds of all the ityassari. It will take all that Seraphina has learned from her dragon uncle, Orma, and everything that she will learn along the way, to defeat Jannoula. Along the journey Seraphina encounters defeat, loss and hardship. Perhaps the greatest thing Seraphina learns is that set backs seldom mean defeat and that help can arise from the most unlikely places.

Hartman’s world is fascinating, complex and detailed. Spanning four kingdoms, each with its own unique customs, food, and sometimes even religion, Seraphina’s journey is a sprawling quest. Readers of the first book will remember her love interest with Prince Kiggs, which only grows more complex in this second installment. Seraphina’s dragon uncle and mentor, Orma, is mysteriously missing which also adds to the necessity of Seraphina’s search. With this parting of the guide, Seraphina must learn to navigate the world as an adult. Hartman examines the origin and function of religion in society to work for good or for evil closely in this sequel, which makes for a fascinating read. Shadow Scale is a tribute to the power of a talented author to create a fully realized fantasy world full of danger, tradition, sacrifice and love.

Read our review of Seraphina here. 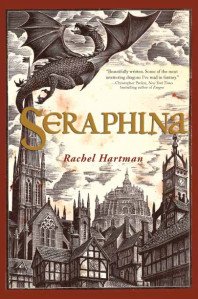 Seraphina ($17.99, Random House Book for Young Readers, ages 12 and up) is reviewed today by Jason Carpenter.

When George Lucas conceived of his Star Wars galaxy, he saw beyond the here and now of giving the people a rousing good yarn. He envisioned a mythology, a world logical and responsible only unto itself, with fantastical creatures that nonetheless felt of flesh and blood.  And like Tolkien before him and Rowling after, the devil- or the grip of imagination- is in the details.

Rachel Hartman infuses her expansive new novel Seraphina– the saga of an uneasy alliance between mistrustful species (sound familiar?) and the young royal court’s musician who may end up being the key to ultimate harmony or lynchpin to inevitable war- with an eye for Joseph Campbell-like character and plot machinations and an adherence to a painstakingly created medieval alternaverse.

The oppositional species are, in this case, humans and dragons, and as Seraphina begins, a murder of a member of the royal court bearing the trademark savagery of a dragon attack threatens to derail the anniversary celebration of a historical, but tenuous, peace treaty between the two sides. In the midst of this pomp, Hartman also fully realizes the emergence of a young girl’s identity, the fiercely astute Seraphina, torturous as it may be to discover that her mother was a dragon. In a genre dominated by young empowered male principals, it’s  a wonderfully acute choice.

Seraphina’s intended demographic, the young and young-at-heart, has proven they can handle the layered storylines, philosophical yearnings, and literal hundreds of major and minor characters that populate the modern fantasy epic. Indeed, Harry Potter’s enduring legacy may just be that it made digging intellectual sword and sorcery lit cool for a fresh generation of make-believers. This novel follows that template elegantly, and at over 450 pages with accompanying glossary, it’s weighty, as well.  The payoff- and it’s not the metaphoric allusions to our own world’s penchant for xenophobia- is in the small quirks of some strongly drawn supporting characters, particularly the reluctantly compassionate dragon mentor Orma, who cares for Seraphina in a way that his dragon demeanor would be loathe to reveal.

Seraphina does rise to rousing good yarn status, but its greatest triumph is in depicting grotesqueries that are anything but and a world that often doesn’t feel that far, far away after all.