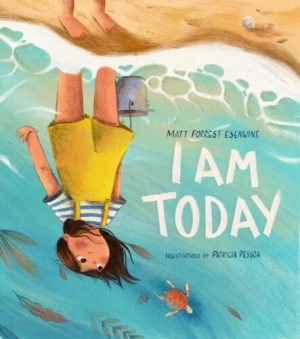 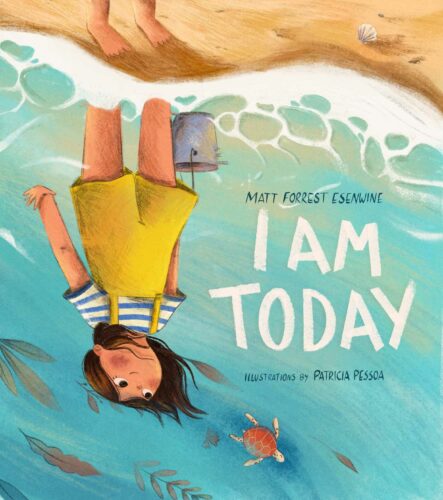 Matt Forrest Esenwine and Patricia Pessoa inspire the “next generation” to become the “today generation”
in I Am Today, an evocative story of a young girl standing up for what she believes in.

From POW! Kids Books: “While playing on the beach in her coastal town, a young girl comes across a sea turtle ensnared by a wire. Her town is home to a factory that has provided jobs for many of her neighbors, including her mother, but it has also been dumping garbage from a pipe into the waters…Unable to forget the sight of the struggling turtle, she inspires the townspeople to compel the factory to change its destructive ways.”

A true picture book, the story in Pessoa’s lively art is never alluded to in Esenwine’s spare, poetic text.

Yet they pair beautifully to give readers a concrete example of how one life can make a huge impact for good.

In a recent interview with Esenwine, the author states that his inspiration for the book came as he was navigating the COVID pandemic with his children. “I was wondering how to help my children feel like they had some control of their life…I spent some time kicking around ideas, and the phrase “I am today” came to me. I thought about that for a while and realized that kids are always being told they are the “Future”…but what if a child doesn’t want to wait?”

This thought-provoking read-aloud would make an excellent addition to the elementary school classroom as teachers cover science and social studies topics like conservation and social change, but it could also be used as a writing prompt for persuasive essays during language arts. 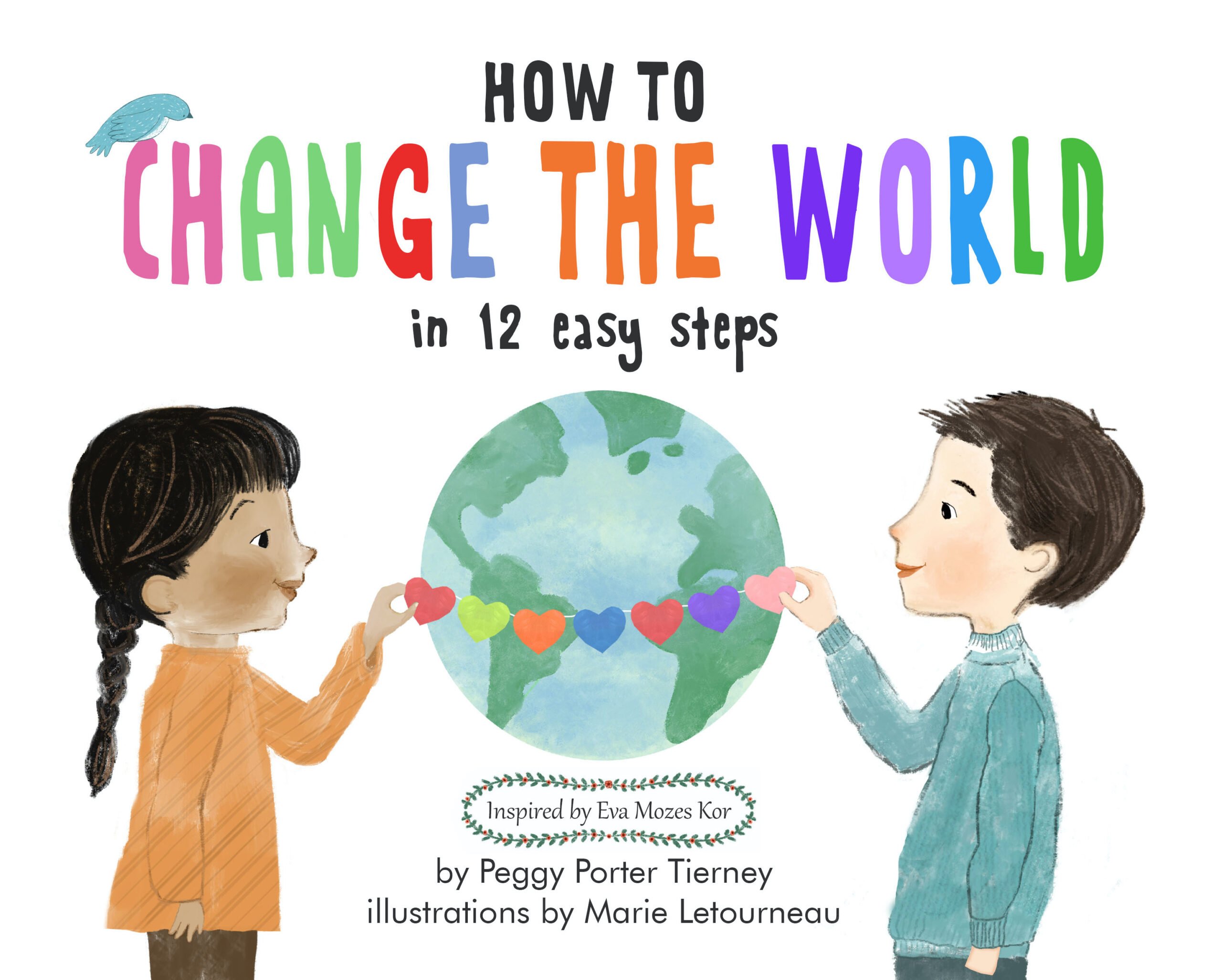 HOW TO CHANGE THE WORLD
IN 12 EASY STEPS 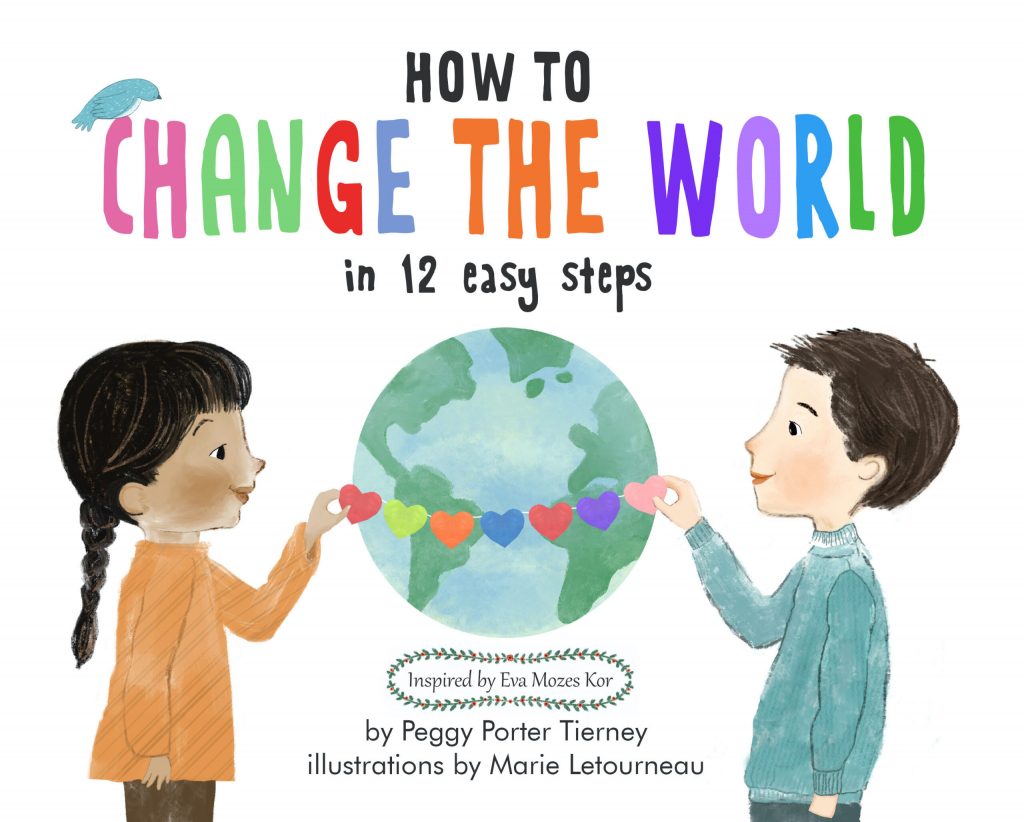 Before reading How to Change the World in 12 Easy Steps, a new picture book written by Peggy Porter Tierney and illustrated by Marie Letourneau, I had not heard about Eva Mozes Kor, the inspiration for this story. I wish I’d had the opportunity to attend one of the talks that she did around the country before she passed away in 2019. If you know what she experienced as a Mengele twin in Auschwitz, yet still survived along with her twin, Miriam, you’ll want to read about and share the wisdom she imparted that has likely positively influenced thousands of school children over the decades.

What I like most about this book is its simplicity and straightforwardness. It’s always encouraging and is never didactic. Rather, it’s full of common-sense suggestions that can bring more meaning and fulfillment into a child’s life. I loved the first spread in which a little girl says she can’t find her phone (in her messy bedroom) and her friend offers to help her clean up. “Start small” is that first step, and it’s one I often use for myself and my kids. The difference in Letourneau’s before and after illustrations are as calming for a reader as being in the tidy room must feel for the two girls.

Not all of the examples presented are about doing good deeds. One of them says “Just be the best you that you can be.” Letourneau’s charming art shows a boy in a still life painting class content with the smiling-faced banana he’s finished painting while his classmates are still busy at work creating their own masterpieces. Another powerful two pages are devoted to forgiveness and how doing so can rid oneself of anger allowing more space for happiness. While this might be the most difficult concept for a child to integrate, it’s definitely one of the most rewarding. It was certainly Eva Mozes Kor’s overarching philosophy and what kept her going despite all the hardship she endured.

While a fast read, How to Change the World in 12 Easy Steps, is also an important and timely one. Parents, caregivers, and teachers can choose to read either quickly or slowly leaving room for numerous conversations. I can see elements of tikkun olam at play in Tierney’s prose. In Judaism, this is the aspiration to behave and act constructively and beneficially—improving the world essentially, something Eva Mozes Kor was deeply committed to. The caring messages Tierney conveys, coupled with Letourneau’s diverse and emotive characters would make this book a welcome addition to any bookshelf. What a wonderful book to share with and inspire children as we approach the new year.

Written and illustrated by Vanessa Brantley-Newton 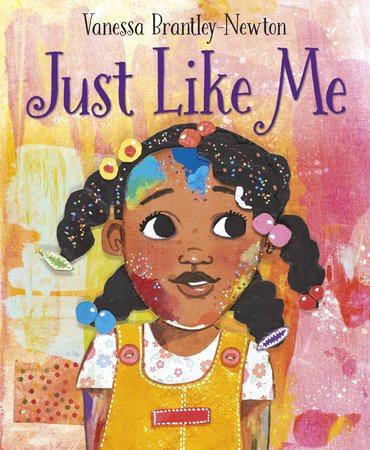 Beautifully written and illustrated by Vanessa Brantley-Newton, Just like Me is a book of poems honoring, encouraging, and shining a light on little girls everywhere.

The poems celebrate diversity, not only in terms of race and ethnicity, but in experience. Brantley-Newton welcomes all kinds of girls with differing hobbies, interests, likes, and dislikes. Girls can be an “Explorer,” a “Negotiator,” “Shy,” or just plain “Weird.” Each type of girl is recognized and validated.

Biblical principles weave throughout the poems. They call for making change in the world through kindness, grace, and “fight[ing] the good fight of love.” As “The Day I Decided to Become Sunshine,” “Warrior,” and “Girl Fight” emphasize, participating in this change is a willful decision girls can make. “I decided to be a light/ by holding a door/ open for others to come through.” “Respectfully/ with humanity/ and lovingly,” girls can empower the world by “fighting for … what [they] believe.”

Just as important, girls can empower themselves. Poems such as “I Love My Body,” “Gumbo Me,” and  “My Crown” send positive body messages and celebrate the uniqueness of each girl. Each one is enough just for being herself.  ”[T]o be the me/that I’m supposed to be” is one of the most life-giving statements a little girl can hear.

Framing Brantley-Newton’s reassuring words are her captivating illustrations. Layers of pattern, color, and texture overlap to energize and uplift, placing each girl in center stage so that every reader can see herself in these pages.

This book is like a blanket of love. It would make a wonderful gift for that upcoming (virtual?) baby shower, birthday party, first day of school, or any occasion caregivers want to send a clear message of appreciation to the little girl in their life.

Imani, the smallest child in her African village, has been teased mercilessly by the other children because of her size. Their heartless jabs are just beginning to take a toll on Imani’s self-confidence when her mother tells her the legend of the brave moon deity Olapa. Inspired by a dream in which she stands hand in hand with the lunar goddess, tiny Imani awakens with the desire to do something great, to touch the moon.

In pursuit of her dream, Imani tries to reach the moon by climbing a tall tree, and building herself a giant pair of wings. The village children, even a snake and a chimpanzee, scoff at her valiant but failed attempts to reach the sky. But Imani’s mother still believes in her, offering the tale of Anansi the spider as a soothing and inspirational bedtime story. “A challenge is only impossible until someone accomplishes it,” she reassures her young daughter.

Although discouraged, Imani attends a village celebration featuring the adumu, a special Maasai warrior jumping dance. She is particularly fascinated by one dancer who jumps higher and higher with each beat. Imani wakes the next morning, determined to try jumping her way to the moon. All day and into the night Imani jumps, a little higher each time. Despite her aching legs and throbbing feet, Imani keeps her focus on the moon, resolute on her goal.

Readers will yearn for Imani’s success in the face of her faith and tiny warrior-like endurance, and cheer when her persistence is ultimately rewarded by the moon goddess herself.

This sweet, inspiring fantasy will rouse young readers to leap for their dreams, and dance, spellbound, until they hold the proverbial moon in their hands.

Where Obtained:  I reviewed a promotional PDF file copy of Imani’s Moon and received no compensation. The opinions expressed here are my own.

Good Reads With Ronna: Imani is a beautiful person and a wonderful role model. She feels so real. Did you have someone in mind when you drew her?

Hazel Mitchell: Thank you! It’s lovely to know that. I didn’t have a particular child in mind when I began. The text conveyed a strong sense of Imani to me. So that’s where I started. And then I spent a lot of time looking at photos of Maasai children, who are very charming and full of character. So I began to make sketches. I did have a live model, but mostly for positions and expression and not for facial features. But she was a very lively model and I think that came across!

GRWR: The artwork in Imani’s Moon is joyful, even despite the local girls teasing Imani for being small. That’s an impressive accomplishment. What medium do you generally work in? Or, do you approach each picture book as a blank canvas that you’re eager to experiment with?

HM: I am glad the illustrations gave you such a good feeling – I feel I accomplished my task. I do approach each book with an open mind. I let the manuscript, the age group and the subject suggest to me the mood, the characters and what might work with medium. Sometimes an editor/art director tells me that they like something particularly that I have done before and that is the starting point. But mostly I am left to my own devices. I don’t have one set style, so I guess it can be a leap of faith on the publisher’s part sometimes! Having said that, I’m experimenting much more in my work, using more watercolour, collage and mixing in digital techniques. Imani’s world spoke to me of rich colours and textures and dramatic effects, so I had a lot of fun with this book!

GRWR: What tends to be the hardest part of working on a new picture book: Starting it? Trying to capture the author’s vision while remaining true to yourself? Finishing the book, or waiting for the next assignment to roll in?

I personally find the initial roughs the hardest part, but also the most interesting. It’s where the first thoughts of the book come out. It can be frustrating, as the vision is only half formed and sometimes it’s exhausting. The hardest part is trying to keep the freshness that you have in the initial sketches. Once you get to finals, the vision is there and it’s time to have some fun with technique and any little surprises that come along that you didn’t expect. After the book is finished, it’s like you gave birth. Then it incubates, until it finally arrives in book form. Then it’s a love/hate relationship!

GIVEAWAY: Hazel Mitchell has kindly offered one lucky reader a signed copy of Imani’s Moon. Please enter the Rafflecopter below and good luck!