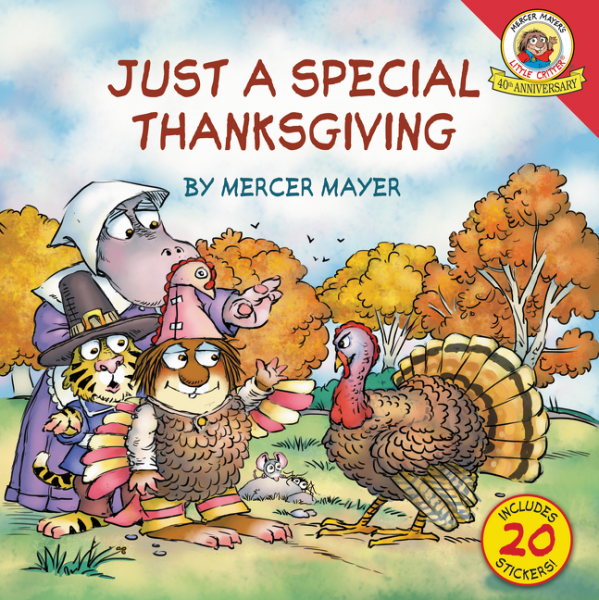 One of the very first picture books I ever bought for my son was by Mercer Mayer. I love Little Critter’s character:  rambunctious, sweet, and fun-loving – someone who kids of all ages can relate to. Much like other series books I enjoy (The  Berenstain Bears and the Froggy series), Little Critter’s books give us an opportunity to see the central character in different snippets of life. In Just a Special Thanksgiving, we celebrate the holiday alongside Little Critter and learn that, though Thanksgiving activities and events may not go as planned, realizing the spirit of the holiday is what matters.

From the get-go we feel that exciting sense of “Thanksgiving is in the air.” In the classroom, Little Critter and his friends are drawing pilgrims and turkeys. When school is out, he must rush home to change into his turkey costume for the Thanksgiving play. While you can probably guess what his lines are, poor Little Critter forgets them and opts to sing a song.

At the “big Thanksgiving Day Parade” early next morning more surprises from Little Critter are in store for all participants.  Tired from marching, our hero hops on a float proudly waving to his parents who, along with law enforcement and other parade goers, have become quite irate by his actions.

I love how Little Critter’s innocence tugs on our heartstrings and how blissfully unaware he is of the commotion his actions cause. What’s even more touching is the way he tries to “right” his wrongs (particularly in the scenes at the grocery store) which lead to even more disaster. Kids will enjoy the humor implicit in Little Critter’s goof-ups. At the same time, parents will be reminded that, no matter how bad things may seem, our children’s intentions are good; their hearts are in the right place. Little Critter’s excitement with helping cook and serve the meal at the community center reminds us what’s at the heart of the Thanksgiving holiday.

A great book to curl up with your little one-perhaps while the turkey is roasting in the oven! (Includes 20 stickers).

A Voyage to the First Thanksgiving

In 1621, a group of nearly 100 people, many of whom experienced religious persecution, left England to find a place where they could worship freely. After an arduous voyage across the Atlantic Ocean–which included violent storms and the birth of a child, they sighted land and eventually founded a settlement near Plymouth Harbor.

Their troubles were not over. Arriving late in the year, they faced a cold and difficult winter. Many were ill. However, in early spring, Squanto, a native from a local tribe, taught the Pilgrims how to plant corn and fertilize the fields with fish. That fall, Massasoit, chief of the Wampanoag, and 90 of his warriors joined the Pilgrims for a harvest celebration, our first Thanksgiving

Greenwood’s narrative in this picture book can be read aloud to young children to introduce them to the traditional Thanksgiving story. Complex issues, such as religious persecution and the Mayflower Compact, are briefly, but clearly expressed in language young children can understand. The hardships the Pilgrims faced are not overdramatized and the author weaves in interesting “kid friendly” facts about daily life aboard the ship: food, sleeping arrangements, entertainment, etc.

Lessac’s colorful gouache illustrations, reminiscent of folk art, enliven the narrative and create a vivid and dramatic visual of the journey and the settlement. A stunning two-page spread of a beautiful, calm night at sea, the sky full of stars sparkling around a full moon, belies the dangers the ship would soon face on its journey to the new world. Sure enough, a month later, the Mayflower and its passengers and crew sail into the stormy season, which Lessac stylistically portrays with a pinkish sky dotted with dark storm clouds. Jagged bolts of lightning and torrents of rain fall from the clouds. The image of the ship rolling in the rough sea further demonstrates the ocean’s frightening power and the hardships the crew and passengers faced on their way to the new world.

An excellent and colorful read aloud to introduce younger children to the origins of our Thanksgiving celebration.

Illustrator Frané Lessac’s website is a must-see for her artwork and a video about how the illustrator works.

Click here for Holiday House’s Educator’s Guide for this book.

Enjoy this dramatic book trailer for The Mayflower. 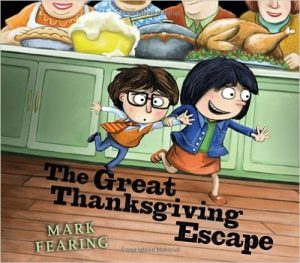