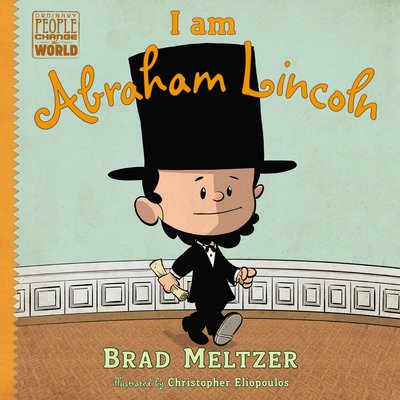 I am Abraham Lincoln by Brad Meltzer with illustrations by Christopher Eliopoulos, Dial Books for Young Readers, 2014.

In January, reviewer MaryAnne Locher reviewed I am Amelia Earhart by Brad Meltzer with illustrations by Christopher Eliopoulos and discussed what makes a hero. Today, on our 16th president’s birthday, I thought I’d share Meltzer’s other book in the new Ordinary People Change The World series from Dial Books for Young Readers ($12.99, ages 5-8), I am Abraham Lincoln, and discuss what makes a great human being.

What is it that makes Abraham Lincoln one of the most admired, quoted and famous individuals in American history?  Clearly it’s because stories of Lincoln’s life demonstrate he was a role model, a voice for those who could not be heard. In I am Abraham Lincoln, one of the first titles published in the new Ordinary People Change the World nonfiction series, author Meltzer introduces us to the young Lincoln, a boy who early on felt strongly about right and wrong and didn’t hesitate to say so.

From a young age, Lincoln preferred reading to working on the farm. He defended the rights of animals when he saw boys behaving cruelly to a turtle and actually composed one of his first essays – “about how hurting animals is wrong.” When most kids of that era did not even attend school, Abe was determined to learn and spent time teaching himself to write. “I loved books so much, I once walked six miles … to get one.” He read every book he could get his hands on and he read everywhere he could.  It’s no surprise his love of books would prove to serve him well as he entered public life.

Presented in an engaging, cartoon-like style that sets this biography series apart from others, I am Abraham Lincoln, is not only easy to read, but fun, too! What kids will adore is seeing our 16th president as a child, interacting with other children and dealing with issues other children deal with to this very day. And though we know Lincoln as a tall, almost larger-than-life figure, looming over his fellow politicians or his foes, in the picture book he remains small throughout, and depicted by Eliopoulos most of the time wearing his signature top hat (where he often kept his important papers).

We learn that Lincoln was once bullied and what troubled him most about being bullied was that the bully, one Jack Armstrong, cheated. He didn’t beat Lincoln fair and square. This irked Lincoln more than being beaten up and when he confronted Armstrong and his cronies with this fact and proposed to fight each and every one of them, they relented. “Sometimes, the hardest fights don’t reveal a winner – but they do reveal character.” This has to be one of my favorite lines in I am Abraham Lincoln because I think it is indeed the essence of who he was and what he was all about. He was destined for great things.

Of course in school children learn about Lincoln and his role in the Civil War, keeping the South from seceding and bringing freedom to slaves, but I also learned that he lost four elections (yes, four!) before becoming president and that his Gettysburg Address, which followed “a speech that lasted nearly two hours” was only two minutes long and 271 words! I love the quotes used in the book and the B & W photographs included in the end pages. They help ground the story of this remarkable man and remind us of his enduring contribution to our nation. A hero among men. “I am Abraham Lincoln,” he says and “I will never stop fighting for what’s right.”

And coming this summer – I am Rosa Parks.