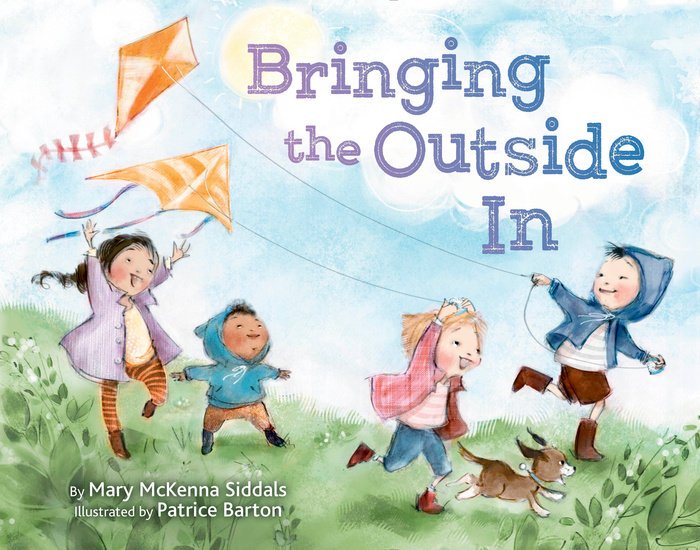 The essence of childhood play is beautifully conveyed in Mary McKenna Siddals’ sing songy picture book, Bringing the Outside In. In this ode to outdoor pleasures, four pals spend carefree time galavanting in nature and their joy is contagious. Siddals’ rhymes and Barton’s seasonal artwork make every page loads of fun to read aloud and look at any time of year.

I must add here that even if there were no lovely, action-filled illustrations by Patrice Barton, you could still imagine the scene easily: kids dashing about with rain jackets and umbrellas, splishing and sploshing to their hearts’ content. Whether in the garden or at the beach, in the rain or in the snow, the children always find something to do outside. Then, when they’re inside, they can delight in the memory of having been together by looking at photos.

Siddals has included simple yet catchy repetition to engage the youngest of readers who’ll want to have the story read over and over. Bringing the Outside In is a great book to encourage outdoor play with the promise of wonderful treasures of nature to discover everywhere.

I Pledge Allegiance by Pat Mora and Libby Martinez with illustrations by Patrice Barton is reviewed by Rita Zobayan.

Independence Day is just around the corner, and for many of us that means barbecues, fireworks, and parades. Of course, the celebration includes the pride of being or becoming an American, and that’s the focus of I Pledge Allegiance by Pat Mora and Libby Martinez and illustrated by Patrice Barton (Alfred A. Knopf; $16.99; ages 3-7).

Young Libby must lead her class in the school flag ceremony, and her great aunt Lobo is getting ready for her citizenship ceremony. They both must learn the Pledge of Allegiance, so they decide to practice together. They practice in front of their cat, Libby’s stuffed animals, and each other, and during the week, Libby learns Lobo’s story about coming to America and becoming a citizen.

“Mi querida, I was born in Mexico and went to school there, but the United States has been my home for many years. I am proud to be from Mexico and to speak Spanish and English. Many people are proud of the places where they were born or where they grew up. But a long time ago…my father wanted a safer place for us to grow up, and we came to the United States. The American flag—read, white, and blue—wrapped itself around me to protect me.”

This sweet story artfully weaves the themes of patriotism, immigration, citizenship, history, and family. It’s a wonderful introduction to the importance, history, and meaning of the Pledge, as well as a reminder that no matter where we come from, we are all together under the flag.

The Invisible Boy by Trudy Ludwig (Alfred A. Knopf Books for Young Readers, $16.99, Ages 6-9), with illustrations by Patrice Barton, is reviewed by Ronna Mandel.

Parents, how many times have you volunteered in your child’s school and noticed an invisible boy? They’re not easy to see, I know. Like Brian, the main character in Ludwig’s touching and thoughtfully written new picture book, The Invisible Boy, they fly under the radar in schools all over the world.

Illustrator Barton’s drawn Brian in muted grays and white although everyone else is in color. Unlike Brian’s imaginative artwork (wonderfully rendered in kid-style by Barton) depicting Super Brian, he’s not a superhero “with the power to make friends” wherever he goes. Nope. Kids like Brian are the last ones chosen for sports teams, they don’t get invited to parties, in fact other kids don’t even think of the Brians as having feelings. They’re often overlooked in the classroom because they’re quiet and so well-behaved. Typically the teacher has to devote his or her time to dealing with the whiners and the yellers.

The Brians in schools everywhere tend to slip between the cracks like the Brian in this tale. So when a new boy named Justin comes to school and eats Bulgogi with chopsticks, he’s a perfect target for ridicule by the others. “There’s No Way I’d eat Booger-gi” says one nasty kid who, of course, gets a laugh. I thought I’d cry when Ludwig wrote of Brian, “He sits there wondering which is worse – being laughed at or feeling invisible.”

And while Brian may frequently get ignored, he’s smart. So smart that he puts a note in the cubby of new boy Justin, with a drawing of himself eating Bulgogi, “Yum!” The two boys hit it off at recess, but it’s clear Justin’s already made another friend, Emilio, who says it’s his turn to play tetherball. But Justin is kind and doesn’t leave to play with Emilio without first complimenting Brian’s artwork. When Brian wants to partner with Justin on a special project, Emilio holds Justin back. “I’m already with Justin,” says Emilio. “Find someone else.” I could feel my grin spreading when the image of Brian begins to shift from grays and white to greens and blues when Justin tells him the teacher says the special project group can have three people in it. As the friendship grows, and Emilio accepts Brian, too, a once lonely boy becomes visibly happy and colorful.

The Invisible Boy includes important back matter with questions for discussion that parents and teachers can use to prompt kids about the topic of bullying. There’s also recommended reading for adults and kids. With bullying being so prominent in the news, it’s great to have a resource like The Invisible Boy to enlighten youngsters about the pain and heartache of being ignored or ostracized.

Ronna Mandel reviews Mine! ($6.99, Knopf Books for Young Readers, ages 1 and up) by Shutta Crum with pictures by Patrice Barton.

I’m particularly partial to board books with few to no words so that parents can spend more time discussing what’s going on in a story than actually reading. This is exactly the case with Mine!

Two toddlers on a play date find fun and friendship as one proclaims all the toys are “Mine!” and the other sits patiently watching calamity after hilarious calamity ensues as the other gathers up all that’s hers (or his because the toddlers’ genders are not pronounced).  When the child, not keen on sharing, notices the visiting child pick up one dropped toy, the chaos begins. Enter playful pup and you can guess the rest. The story unfolds seamlessly with tumbles and tosses that need no description because the artwork is so vivid.

The joyfulness of this story is evident from giggles and grins galore on the characters’ faces including the dog (okay the dog doesn’t giggle, but he does woof).  You will love the beautiful illustrations by Patrice Barton, and your children will be captivated by Mine! as will you.