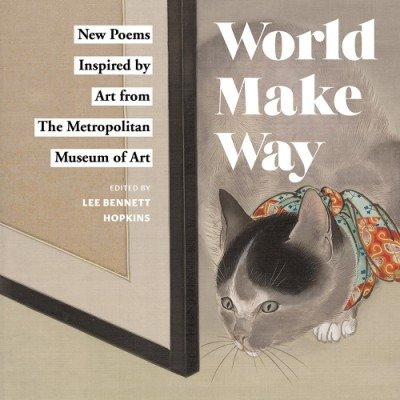 A curious, crouching cat on the book’s cover immediately drew me into World Make Way: New Poems Inspired by Art from The Metropolitan Museum of Art edited by Lee Bennett Hopkins. Eighteen thoughtful and evocative poems and the accompanying works of art that prompted their creation kept me turning the pages. This beautiful collection is everything a poetry anthology for children should be: diverse, original and, as the title suggests, inspiring. In the book’s back matter I learned that Lee Bennett Hopkins, the editor of World Make Way, holds the Guinness Book of World Records citation for compiling the most anthologies for children, making him more than well-suited to spearhead this satisfying project in conjunction with the Met.

I appreciate the breadth of art that was selected and the variety of poems that were commissioned for World Make Way. There is something that will appeal to every reader who dives in, whether they like short, simple poems or those more complex and layered. There are serious poems and those that have fun with the reader like Marilyn Singer’s poem, Paint Me, the first in the book. In it the teen subject of Gustav Klimt’s portrait, Mäda Primavesi, bids the artist to make haste and finish up the painting because she’s such a busy person, hence the book’s title World Make Way, a line she utters in desperation! She has places to go. People to see. After all, if her family can afford to have Klimt paint her, she’s likely a socialite. Ultimately the book will show children how to look at art with fresh eyes and take from it something unique to them. Art evokes something different in each person who beholds it and the poems included perfectly capture that.

One particular poem that stayed with me was Young Ashoka Sundari by Amy Ludwig Vanderwater inspired by Shiva and Parvati Playing Chaupar: Folio from a Rasamanjari Series, 1694-95 by Devidasa of Nurpur. Her poem introduces readers to Ashoka who secretly observes her parents: I stand behind this neem tree / to watch my parents play / a game of chaupar / on a tiger rug / beneath bright mango sky. Offering a child’s perspective in her poem, Vanderwater helped me to have a lightbulb moment with the artwork. It’s not always about what we see when observing art, it’s also about what or who the artist left out, or where the scene is set. What a wonderful conversation starter! What does this art say to you? What do you think is happening here now? How does this picture make you feel? What might happen now that the child has witnessed this scene?

In my multiple readings I found myself wondering what I’d write about a certain piece of art such as Henri Rousseau’s The Repast of the Lion, but if I ever see the painting again, I’ll forever associate J. Patrick Lewis’s poem with it. Now that he’s fed and jaguar-full— / Finally his appetite is dull— And of Joan Bransfield Graham’s Great Indian Fruit Bat, a poem about a painting of the same name attributed to Bhawani Das or a follower, 1777-82  I marveled at her internal rhyme and alliteration. As my wings whisk me, swooping through / this black velvet night, who will admire / my elegant attire, the intricacy …  A bat’s point of view, fantastic!

While I can definitely see educators enjoying the book for its varying forms of poetry and the individual interpretations of the poets to accompany the magnificent works of art, I can also easily see a parent sharing the book before any museum visit or simply as a way to spark a child’s imagination. It certainly sparked mine.

Read a review of another poetry collection here.