Debbie Glade tells us why Miss Mousie’s Blind Date  ($19.99, Tundra Books, Ages 3 and up) made her giggle and smile.

Who wouldn’t want to read a book with verse like this?

“Matt LaBatt, the water rat,
was such a handsome fellow!
His fur was black. His eyes were red.
His teeth were lemon yellow.”

In the mood for a little romance and companionship, Miss Mousie tries to get the attention of a potential gentleman caller, only to be mortified when he calls her “fat.” She goes home embarrassed and in total despair. But a few days later she discover an anonymous invitation on her door from a mystery date. Feeling insecure, Miss Mousie gets all dressed up in a disguise. When she meets her mystery man, or rather mystery mole, what she discovers is not quite what she had expected and she sees herself in a whole new accepting light.

There are many children’s books that teach individuality, but Miss Mousie’s Blind Date does it in a wonderfully subtle and original way. The rhyming verse is so cleverly written by author, Tim Beiser, and the story is just plain cute. The charming illustrations by Rachel Berman are beautifully detailed and really animate the story.

What I love about this book is that it reminds us all that everyone feels insecure about themselves in one way or another, and it’s okay. It also gives us hope that there’s someone very special out there for each and every one of us.

My 11-year-old son Coleman has always been a voracious reader. The past few months he’s devoured some interesting middle grade books and I’ll be sharing some of his thoughts on what he’s read and loved.  The good news is that he’s discovered a slew of great books in all sorts of genres by a variety of very talented authors. We’ll begin our conversation by discussing a new series called The Song of the Winns and the first book in the Gerander trilogy is entitled The Secret of The Ginger Mice ($12.95, Running Press, ages 8 and up) by Frances Watts with illustrations by David Francis.   – Chosen as a Children’s Book Council of Australia Notable Book 2011

Q. In a nutshell, if you described this book to friends, what would you tell them it was about?

A. I’d have to say this book is part mystery, part adventure about mice triplets. When Alice and Alex, two of the triplets discover their other brother has gone missing, Alice and Alex set out on a journey to find Alistair (a ginger mouse unlike the other two) and learn why he has possibly been mousenapped.

Q. Where do the mice live in the story?

Q. Tell us something about the triplets. What are they like, what challenges do they face trying to locate Alistair?

A. Alex and Alice are very adventurous yet Alistair is the type who would rather sit on a chair, snuggle with his scarf and read a book.  The two siblings face many obstacles during their exploits like Alex eating all the food on the first day of the journey, encounters with two-faced spies, and being locked in a cellar with almost no way out.

Q. How do the struggles in Gerander affect the triplets?

A. Semi-Spoiler Alert:  Most of the ginger mice come from Gerander, and Souris wants to eliminate all of the ginger mice no matter where they are from so it will be easier to invade and conquer Gerander. As it happens Alistair was mousenapped by FIG, a pro-Gerander secret organization, in order to keep him safe from Souris mousenappers and spies. So all the time Alice and Alex are worried, Alistair is actually safe.  It’s when Alistair tries to escape to go home that his real problems begin.

Q. What did you enjoy most about this book?

A. It’s so hard to pinpoint one thing that I liked because there were so many things in the story I found enjoyable.  I cared about the mice and felt how they did. I thought the story idea was clever and it kept me turning the pages to see what crazy things Alistair was going to get up to, unlike how he usually behaved. The setting was quite realistic and it was easy getting caught up in the story.

Q. How did you feel when you finished the book?

Q. Who would like The Secret of The Ginger Mice?

A. Anyone who can read well and likes adventure books with lots of surprises would find this a terrific book. In other words probably 3rd through 5th graders, or kids even younger if their parents read it to them. I can’t wait for book #2.

I could not let October end without mentioning this delightful picture book that brings the whole point of National Disabilities Month and National Anti-Bullying Month home. 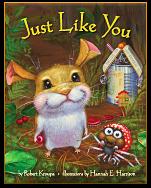 Written sensitively by Robert Kroupa with stunning, detailed illustrations by Hannah E. Harrison, Just Like You ($16.99, Seven Legs Press, ages 4-8)  is a meaningful story of two friends – Henry, a deaf mouse and Boris, a disabled spider. Together with all of nature’s other creatures, these pals inhabit Piney Forest but live alone in a little tin cottage. Teased and goaded constantly because of their differences, Henry and Boris find comfort in each other’s company, but deep down wish for acceptance.

When a raging fire begins to wreak havoc on the lives and homes of the very creatures who mock and bully Henry and Boris, they don’t hesitate to find a creative way to alert everyone of the danger. Because of their heroics, the two are welcomed into Piney Forest. Finally, their wishes come true. The friends are appreciated for who they really are and all they have to offer!

“Because now we all see

that it really is true.

Proceeds from the sale of this book will be distributed to a pre-selected charity. Buyers can choose from the following: HollyRod Foundation, PACER Center, Art of Elysium and the Starkey Hearing Foundation. Find out more at http://www.JustLikeYouFoundation.org.
Ronna Mandel reviewed Just Like You.