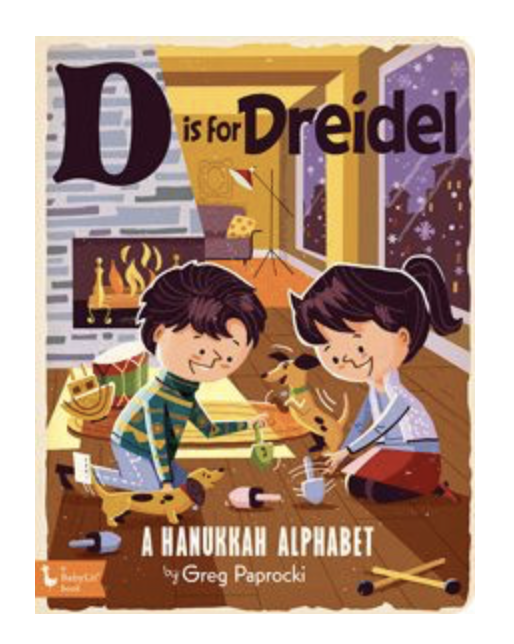 D IS FOR DREIDEL: A Hanukkah Alphabet
Written and illustrated by Greg Paprocki
A BabyLit Book
(Gibbs-Smith; $9.99, Ages 2-5)

Let your little learners thumb through all 32 pages of this colorful board book with its retro cartoonish feel while you gently introduce all the different Hanukkah related things included. While this is not the first primer in the series from Paprocki (there’s S is for Santa, L is for Love and B is for Boo), I’m glad Gibbs-Smith decided it was important to add this title. And expect two more soon (E is for Easter and R is for Ramadan) which can be pre-ordered now. I honestly wondered at first how the author/illustrator would find appropriate words for each letter, but surprising he did including Y is for yontiff (Yiddish for holiday). Saying “Gut yontiff” is how my parents and grandparents greeted fellow Jews at holidays throughout the year.  From alphabet to zaide, I found so many of the illustrations beautiful and welcoming with their jewel tones and cheerful settings. J is for jelly doughnut is another particular fave but truly there are many so you’ll just have to see for yourself. Then, perhaps you, too, will be as eXcited as I was to read the book. 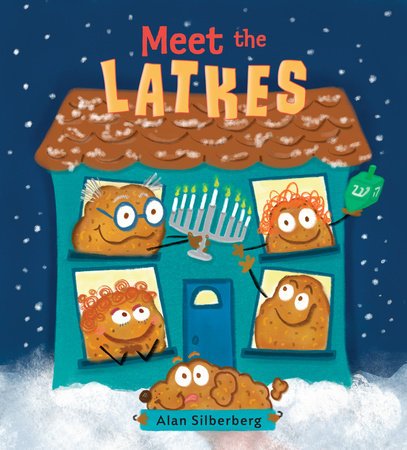 Meet the Latkes by Alan Silberberg makes for an enjoyable read if parents seek something a bit less traditional and more whimsical to share this Hanukkah (or Chanukah!). Silberberg, an award-winning cartoonist and children’s TV creator, is both author and illustrator of this debut picture book.

The main characters in the story are Lucy Latke, her grandpa and her dog Applesauce. The humor comes into play when Grandpa tells Lucy his version of Chanukah or Hanukkah as is explained early on since the holiday can be spelled multiple ways. But these are the two most common. I suppose you could say Meet the Latkes is funny from the get-go because we’re listening to latkes as opposed to people and that’s probably enough to get little ones giggling.

Rather than stick to the standard story of the heroic Maccabees, headed by Judah, who fought to keep the Jewish people safe from a brutal King Antiochus, Grandpa recounts the tale of the Mega-Bees. Their nemesis was a group of “Outer space spuds.” All the while Grandpa is telling his story, Applesauce is trying to explain the real version and growing increasingly frustrated.

Most young Jewish children know the Hanukkah story but it bears repeating annually. I never tire of reading new spins on an old tale and Silberberg has definitely done that. Children who aren’t Jewish or have never learned the story will find Silberberg’s way of conveying this historic tale most entertaining, especially if different voices are used for Grandpa and Applesauce.

In Grandpa’s version, the evil tater tyrants ultimately get whipped into mash that, when mixed up with “EGG and ONION and a pinch of flour,” becomes what we know as latkes! Of course, Applesauce goes on to explain the true tale which includes the miracle of the Maccabees’ discovery of a tiny amount of oil left “to light the holy menorah.” What should have been enough for one day lasted eight which is why we light candles for eight nights. My favorite part of Meet the Latkes is the teenage brother who always says “I don’t care!” and remains cloistered in his room until finally emerging near the end, making that just one more miracle to celebrate and one that may resonate with many families. In fact, I laughed upon discovering teen Lex Latke’s promotional blurb on the book’s back cover. “You want to know THE TRUE STORY OF HANUKKAH? Don’t ask me—read this book!” I agree. 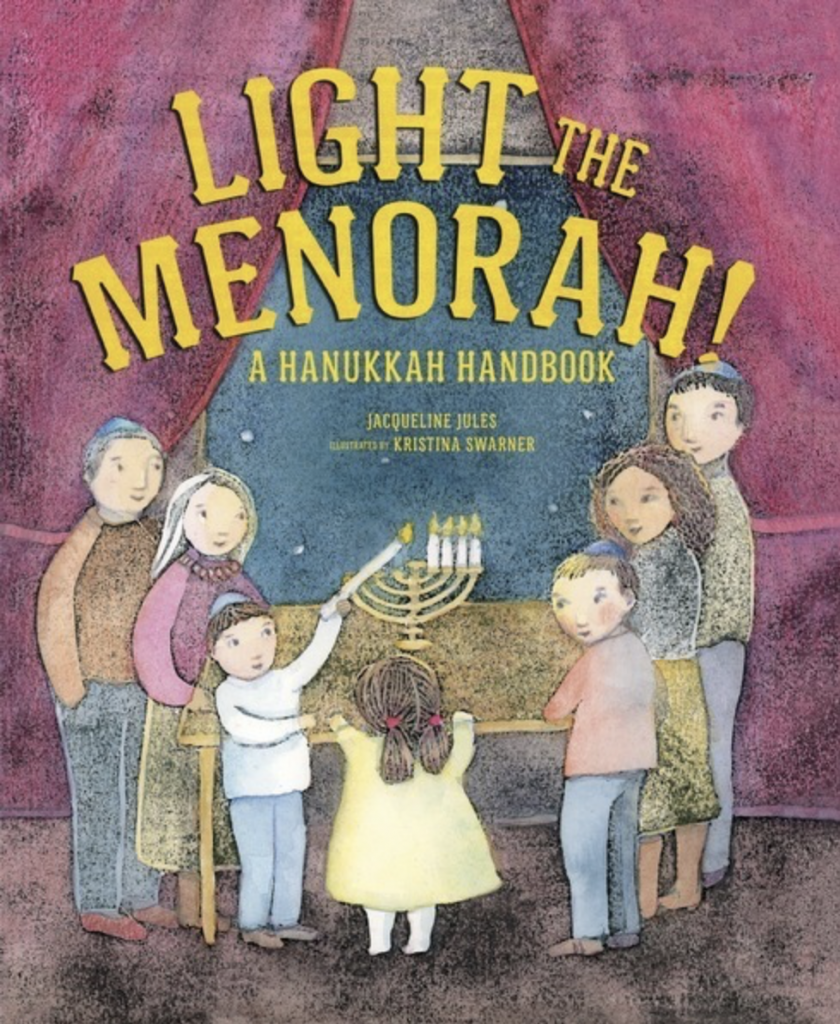 After so many years of celebrating Hanukkah, I thought there was nothing more to learn about the holiday but I was wrong. Jacqueline Jules has written an engaging picture book that I could easily see using with my grown-up family every year.

There’s an introduction, blessings, thoughtful verse to accompany each of the eight nights’ candle lighting along with a moving reflection to read silently, aloud or discuss together as a family. The second half of Light The Menorah! features four pages devoted to the Hanukkah story for which there are two versions, something I had never known. There’s the historical version and the rabbinic tradition which is the one I’ve always told about the oil from the damaged Temple lasting eight nights. The historic version says that since the Maccabees “couldn’t take a week to observe Sukkot properly, … they celebrated for eight days during the rededication of the Temple.”

The remaining pages answer common questions such as when does Hanukkah occur, where is it celebrated and more. I was delighted to read the section where Jules explains the role women played in the Hanukkah story. No one will be disappointed to see instructions for playing the dreidel game, latkes and jelly donut recipes in addition to easy crafts.

Swarner’s lovely watercolor illustrations dress up the text and are well-paired on every page or spread. I was drawn to the book by the title and cover art and am glad I didn’t miss a single thing both Jules and Swarner had to share. This one’s a keeper and would make a wonderful gift to families just beginning to celebrate the Festival of Lights.