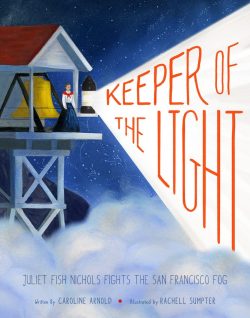 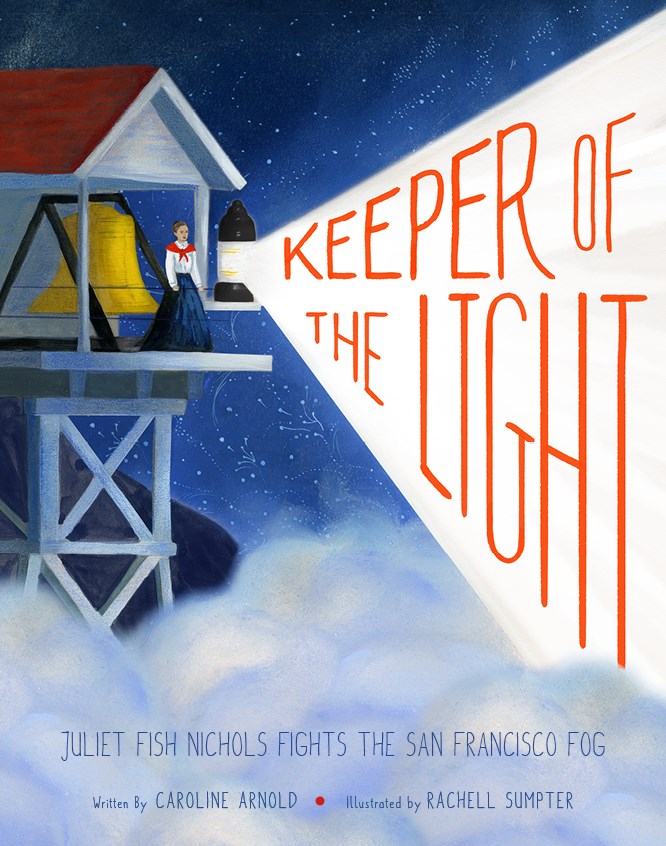 Keeper of the Light written by Caroline Arnold and illustrated by Rachell Sumpter is a fascinating, “fictionalized account based on true events and historical documents about Juliet Fish Nichols …” I love learning about historical figures, especially women who had non-traditional careers, whose stories might never be told were it not for an inquisitive picture book author.

A widow at 42 and in need of a steady income, Juliet Fish Nichols worked for over a decade as Keeper of Angel Island Light Station in San Francisco Bay. Author Arnold presents an engaging interpretation of several years of Nichols’ life there—Point Knox to be precise—in log format so that readers can gain insight into the important responsibilities she was tasked with. This not only involved making sure the lamp (visible for up to 13 miles) was filled with oil, clean, and in working order but when needed, operating the fog bell machine.

Life may have been simple and calm most of the time but it could suddenly change when the weather grew foggy as it was wont to do. When that happened, Nichols had one thing in mind: Keep the boats safe. Then, on April 18, 1906, a horrendous earthquake rocked San Francisco. Buildings tumbled to the ground and deadly fires broke out all over the city. Nichols helped by hanging her lamp to guide the way for ferries transporting people to safety.

On July 2 of that same year, as early as midday, fog began rolling in …

When the fog’s vast thickness rendered the fog light useless to keep boats from crashing into the rocks the clang, clang of the bell could be heard. But it soon stopped. Nichols realized the bell machine was broken but there was no time to get help or repairs. The keeper had no choice but to grab a mallet and strike the bell herself … every fifteen seconds, throughout the night … for over 20 long hours … until the fog lifted. Nichols’ selfless efforts likely saved hundreds of lives that day when people were still recovering from April’s tragedy.

Sumpter’s warm-toned illustrations with a watercolor style perhaps mixed with pastels took me back in time to the turn of the twentieth-century San Francisco Bay area. They add atmosphere and tension in all the right places and, together with Arnold’s text, make this such an interesting read. We learn from the Author’s Note in the back matter that Nichols’ logs do exist but this fictionalized version makes them accessible to children by focusing on a few significant events during her 12-year tenure as keeper. I now want to visit Angel Island like Arnold did to see where this amazing woman lived and worked and to see firsthand the giant bell that, with Nichols’ help, saved so many from perishing.