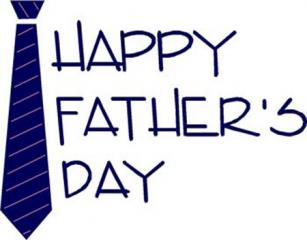 Does your child’s heart belong to daddy or perhaps another important guy in their life? Here’s a selection of picture books that celebrate all facets of fathers’ relationships with their kids. Share a story this Father’s Day with someone special and make their day. 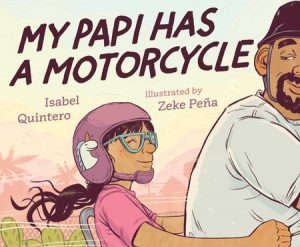 MY PAPI HAS A MOTORCYCLE
Written by Isabel Quintero
Illustrated by Zeke Peña
(Kokila; $17.99, Ages 4-8)

With its beautiful homage to the author’s childhood home of Corona in California, My Papi Has a Motorcycle is an atmospheric read that pulled me in as the third rider on the titular motorcycle. Quintero and Peña team up for a second time to paint a picture in words and artwork of a changing city that’s still full of family, friends and overflowing with humanity.

This 40-page picture book feels wonderfully expansive in that it takes readers all over Daisy Ramona’s hometown huddled close behind her papi. A carpenter by day, Daisy’s dad often takes her out on his bike after work but tonight’s special because they’re going to see some of the new homes he’s building. As they take off on their journey, Daisy remarks how they become like a comet, “The sawdust falling from Papi’s hair and clothes becomes a tail following us.” Wow! You can easily feel the power of the motorcycle from the language and illustrations that fuel this fabulous picture book.

Travel page by page, gorgeous prose after prose, illustration after illustration, with Daisy and her Papi. Together they cruise by Joy’s Market and greet the librarian, “roar past murals that tell our history–of citrus groves and immigrants who worked them …” But when they head over to Don Rudy’s Raspados they see the front door boarded over, a sign of gentrification coming to the neighborhood. Still Daisy’s filled with delight at the city she calls home, a city that’s a part of her. They pass friendly faces and wave to Abuelito and Abuelita standing in their front yard.  The sights and sounds of Grand Boulevard greet her as they approach the circle where cars once raced and where Papi still “buys conchas on Sunday mornings!”

There’s no denying the glorious feeling readers will get as father and daughter make a few more important stops and eventually zoom home where Mami and Little Brother await. Don’t miss celebrating fatherhood, family ties and the meaning of neighborhood in this endearing picture book that simply soars! 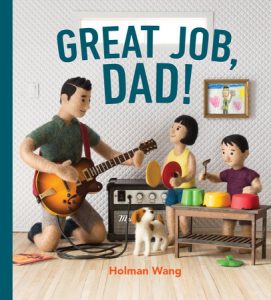 I never got a chance to read Great Job, Mom! but I’m happy I did get to read Holman Wang’s Great Job, Dad! This fiber artist extraordinaire painstakingly creates realistic scenes using needle felting in wool so I appreciate that the book’s back matter enlightens readers as to what’s involved in the process.

Holman’s rhyming story is funny and also realistic. It shows how this particular father, who is a manager during his day job (yes, that pays the bills), has many other volunteer jobs at home. When he feeds his children he’s a waiter. When he takes them for a hike in their wagon and stroller, he’s a chauffeur. “Quite often he becomes a chauffeur to several VIPs.” As an inspector (bound to bring out giggles because here we see Dad checking for a dirty diaper),”it matters what he sees!” We all know the role of judge dads often play  when siblings or friends fight. I think diplomat could have been added here, too! Additionally this dad puts in time as a computer engineer, librarian, pilot, architect, receptionist and astronomer that we see in detailed illustrations that never cease to amaze. Of course my favorite is the bedtime scene where titles from books on the bed and bookcase can actually be read. If you’re looking for something original to read for Father’s Day, pick up a copy of this picture book. 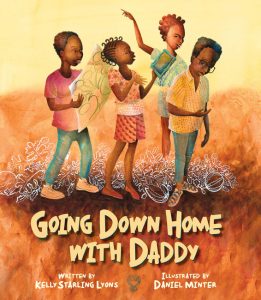 My childhood friend’s mother was from the south and used to attend family reunions when we were kids. Going Down Home With Daddy is exactly how I imagined them to be. Lyons’s story, “inspired by her husband’s heritage and her own” beautifully captures the annual family gathering incorporating every sense in the reading experience. I could see, touch, smell, taste and hear everything through Lyons’s perfect prose from the car ride when Lil Alan’s too excited to sleep to his first glimpse of Granny, “scattering corn for her chickens like tiny bits of gold.”  I could smell her peppermint kisses, hear the laughter as more and more relatives arrived, feel the breeze during the tractor ride, taste the hot, homemade mac and cheese and see the cotton field “dotted with puffs of white.”

The story unfolds as the narrator, Lil Alan, realizes he’s forgotten something to share for the anniversary celebration and cannot enjoy himself until he figures out what contribution he can make. When he does, it’s the most heartfelt moment although there are many others in this thoughtful, moving picture book. Minter’s warm illustrations in earthy tones heighten every experience and seem to recall the family’s African roots and connection to the land. I found myself rereading the picture book several times to soak up more of Lyons’s rich language and Minter’s evocative art. 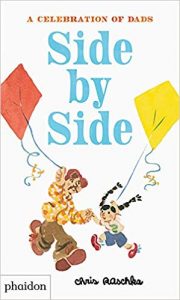 SIDE BY SIDE: A CELEBRATION OF DADS
Written and illustrated by Chris Raschka
(Phaidon; $18.95, Ages 3-5)

Caldecott-winning author and illustrator, Chris Raschka, has created a simple yet spot on read-aloud with Side by Side. It will fill your heart as you share it with little ones. A diverse group of children and their dads engage in typical father-child activities, some of which I’d almost forgotten now that my kids have grown up. With each rewarding page turn, a new treat awaits at will resonate with both parent and youngster. Ideal for this age group, Side by Side, with its economy of words and buoyancy of illustration, manages to keep this picture book cool and captivating.

I love how Raschka opens with the quintessential Horse and rider as a little girl, braids flying to depict motion, rides bare-back on her dad. Readers will feel the delight emanating from her entire body. Raschka also cleverly demonstrates how roles change, first with a child fast asleep sprawled across his father while his dad reads (Bed and sleeper). And then he follows up that illustration with one parents know all too well. In Sleeper and waker that same man’s son attempts to get his father up from a nap. The watercolor art is lovely and joyful and leaves the right amount of white to pull us straight to the characters and what they are doing. I’m still smiling from this read! 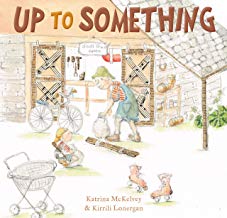 UP TO SOMETHING
Written by Katrina McKelvey
Illustrated by Kirrili Lonergan
(EK Books; $17.99, Ages 4-7)

Up to Something serves as an ideal reminder on Father’s Day that there’s more to being a dad than simply being around.

After seeing a poster for a race, Billy gets excited and asks his dad if they can enter. When his dad says, “Of course, Billy! Let’s go build something!” he has one thing in mind when Billy has another. Once in the shed, Billy’s father’s words seem to indicate that he’s going to build the vehicle on his own despite making his son his special assistant.

Disappointed by the drudge work, Billy goes ahead and constructs his own vehicle. When his dad bangs and drills, so does Billy. Looks like Billy’s diving head on into the project yet his dad seems oblivious. When at last the race cars are unveiled, Billy’s vehicle has an individuality about it that is so much more unique than the one his father has made. That’s when it finally occurs to this adult that he has essentially ignored his child, that he hasn’t let his son contribute. That’s not a team effort. Putting their two heads together provides an opportunity for father and son to connect and create and, out of that combined effort, magic can and does happen.

Lonergan’s use of loosely shaped, muted watercolor and pencil in her illustrations complements the story. She’s also employed newspaper and what looks like sheet music as a substitute for wood, producing an added dimension to the art that plays into the book’s theme of imagination, recycling and invention. Clearly being present as a parent is what matters and McKelvey’s picture book hits that nail on the head. 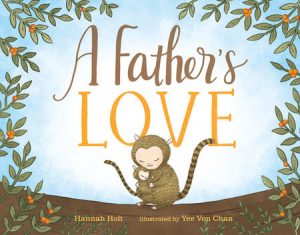 I had no idea what to expect when I read Hannah Holt’s A Father’s Love but now I understand why it’s been getting so much buzz. Told in well metered rhyme that never feels forced, this charming picture begs to be read out loud. The author’s covered a colorful and varied selection of animal dads and sometimes family and focuses on the unique bond between father and offspring.

“Beneath a mighty REDWOOD TREE,
A fox tends to his family.
He keeps them safe
by digging chutes.
This father’s love
runs deep as roots.”

Nine animals from marmoset to toad, penguin to wolf and ultimately some human fathers fill the pages of this tender tale. We learn how dads do all sorts of interesting and important things for their young. Take the emu, for example. The male of the species incubates the eggs much like the seahorse. Chan’s appealing artwork shows again and again how strong a father’s love is the world over whether her illustrations are of an Emperor Penguin or a Peregrine Falcon. Dads may come in all shapes and sizes, some may swim and some may fly, but the love they have for their children is the one thing they all have in common. Back matter offers more details about all the animals in the book.