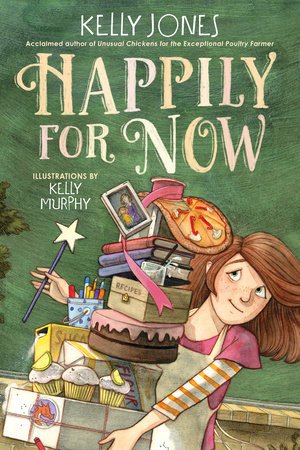 Happily for Now written by Kelly Jones and illustrated by Kelly Murphy follows Fiona who is sent away for the summer to live with relatives she’s never met because her mother is entering a treatment program for an unspecified addiction. In addition to her mother, Fiona is leaving behind Ms. Davis, who is like a guidance counselor to her (although the text doesn’t state that) but whom Fiona describes as her fairy godmother and whom she wants to emulate. Throughout the summer, she will be able to speak with Mr. Rivera who will also be able to help her with anything she might want to discuss.

Although the storyline involves Fiona’s addicted mother, this is not the main plot of the book and the focus is really on how Fiona tries to lend an eager hand to her quirky extended family, making this middle-grade novel a more light-hearted read.

With the help of her new friend Julia, Mr. Rivera’s daughter, Fiona sets out in her new town to try to help her relatives with their problems, or rather, try to help them help themselves, like any good fairy godmother (although she prefers the term fairy godperson because she is not a mother) who grants wishes might do, since she doesn’t want to just sit around being a princess. Her Aunt Becky’s bakery hardly has any customers because she keeps baking the same boring desserts she’s always made. Her great-uncle Timothy hardly ever speaks but has a secret talent and her great-aunt Alta is all doom and gloom. Can Fiona help them? And if she cannot get her happily ever after, can she at least get happily for now? She’s sure going to try.

Text is interspersed with emails between Fiona and her mother and between Fiona and Ms. Davis, which readers will enjoy, as the story progresses through these exchanges. I eagerly looked forward to reading these email conversations which provided updates on how Fiona’s mother was faring in her treatment program, as well as further guidance from Ms. Davis on Fiona’s fairy godperson training. Fiona, is at times both childlike, as she discusses fairy tales, witches, and the like, and like an adult, as she deals with her mother’s addiction and has to convince her to stay with her treatment program when she wants to leave early. Fiona easily makes us care about her and all the people in her life so that we enjoy spending time with her and want to see her have a happy ending.

Murphy’s black-and-white illustrations are a welcome addition to the pages, adding a lightness to Happily for Now and its tough subject matter. I do think it’s important since it’s not mentioned on the book jacket, for parents and young readers to be aware that, despite the lightness of this story, addiction is still included. However, young people who are living with a parent who is struggling with any sort of addiction or other illness will take comfort in reading such a thoughtfully crafted and thoroughly engaging book in which the protagonist is dealing positively with similar circumstances as they are. 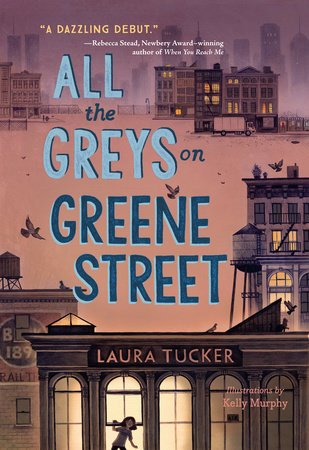 In the new middle grade novel, All the Greys on Greene Street, twelve-year-old Olympia is trying to solve a mystery with her two friends, Alex and Richard. She knows her father, an art restorer, has left the country. She knows why her mother hasn’t gotten out of bed since her father left. And she knows something is amiss with an art piece her father and his business partner and devoted friend, Apollo, have been working on restoring. What she doesn’t know is why her father decided to leave so suddenly and why there are people knocking on the doors of her parents’ Soho loft, demanding answers.

All the Greys on Greene Street is Laura Tucker’s debut novel, a historical fiction story set in 1981 when Soho’s large industrial lofts housed artists instead of chain stores and the subway cost 75 cents. Narrated in first-person by Olympia, (Ollie to her family and friends) Ollie is a keen observer, and tries to make sense of the complex adults in her life. She is devoted to her parents and to Apollo, whose studio she visits and who cares for her like his own child. When her father leaves, Ollie tries but can’t rally her mom to get out of bed. She hides her mother’s depression, trying to move through her world as if everything is fine. For weeks, she gets herself to school, concentrates on school projects and eats lots of canned soup. She refuses to ask for help or even share what’s happening with her mom. She manages to convince the neighbors that things are okay, but her friends discover her secret. Ollie pleads for secrecy, but Richard and Alex refuse, and betray her trust. Ollie is just beginning to work through her feelings when catastrophe rocks their neighborhood.

Like the title suggests, Ollie has the eye of an artist. Everyone in her life encourages her to look closely at her world and really try to understand what is happening. Kelly Murphy’s pencil illustrations help the reader see what Ollie sees and what she draws. And the writing is beautiful. There are no easy answers and there is no villain, just friends trying to do their best with what they have. Tucker offers some very smart history and art lessons imparted with the lightest touch. Apollo teaches Ollie about color and craft and the lessons will stay with the reader, as much as they impact Ollie. 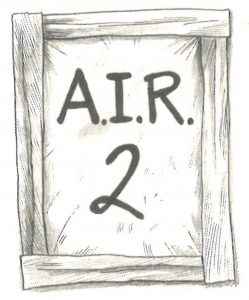 Kids and parents were different in 1981 and these sixth graders are allowed to navigate New York City in a way that tween and teen readers with hovering helicopter parents might be surprised by. But even with absent parents and independence, Ollie and her friends are never alone. Their own friendship, their strong community and their neighbors keep them safe. Readers might be tempted to compare Ollie to Harriet, from Louise Fitzhugh’s Harriet the Spy. They both have keen observation skills, but Ollie is softer and savvier than Harriet. Ollie’s biggest lessons are about how to ask for help, and friends who become family and how some of life’s hardest questions have more than one answer.

Interior artwork by Kelly Murphy from All the Greys on Greene Street by Laura Tucker courtesy of  Viking Books for Young Readers ©2019.

I love all the wild and wacky ways illustrators design monsters in children’s books and the monsters in Romping Monsters, Stomping Monsters are just that – wild and wacky! That’s one of the reasons why this picture book works so wonderfully. The other reason is that the combination of Yolen’s rhymes (short, sweet and silly) with Murphy’s humorous artwork had me lingering on every page.

This sequel to Creepy Monsters, Sleepy Monsters is packed with every type of monster imaginable, but none to scary to put off a youngster at bedtime. Hanging out in a park (aka Creepy Commons), the assorted monsters in Romping Monsters, Stomping Monsters come in many shapes, sizes and colors. Some have scales, others have tentacles. Readers will spot winged, one-eyed, three-eyed, and bulging-eyed monsters. Some monsters are pink, others are purple. I liked the two-legged monsters, but there are also some with four. There’s even a monster with extremely long, stretchy arms, perfect for playing jump rope!

In Romping Monsters, Stomping Monsters, a monster mom (clutching her shoulder bag) takes her two monster kids to play in the park where they’re greet by a bevy of monster buddies. Kids will want to closely inspect every page because there are lots of giggle-worthy antics going on. Yolen’s read-aloud rhymes are fun and offbeat, in other words, ideal for your very own little monster:

What a perfect park Murphy’s envisioned with a lake, fountains, statues, pavilions, and plenty of wide open space for monsters to run around in to their monster hearts’ content. And for a frozen treat when monsters are hot and teeter-tottered out, there’s a monster-sicle vendor. Yolen’s also added a touch of monster mischief around a water fountain, when the bigger sibling of this story goes a bit overboard. But the monster mom insists sibling monsters make up in the end. Does everyone go home from Creepy Commons happy? What do you think?

If you are in need of some good, ghoulish tales tonight and tomorrow, take a look at this roundup of recommended reads.

The Monstrous Book of Monsters by Libby Hamilton with illustrations by Jonny Duddle and Aleksei Bitskoff ($17,99, Templar Books, ages 5-8)