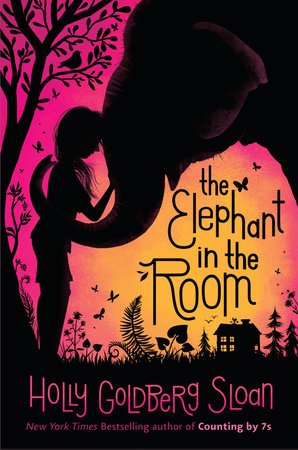 THE ELEPHANT IN THE ROOM

In The Elephant in the Room, when middle-schooler, Sila Tekin’s mother is stuck in Turkey trying to get her immigration paperwork in order, the loneliness is almost unbearable for her and her father, Alp. Sila’s newly withdrawn demeanor prompts her school to pair her with autistic classmate Mateo Lopez in a special program that has the kids spending time together at the end of each school day. The point is to help both kids socialize more and, after a slow, silent start, they eventually begin getting to know each other.

Life changes dramatically for Sila and Mateo when Alp is hired to fix an old truck owned by widower, Gio, who lives on a non-working farm on the outskirts of town. Sila and Gio seem to form an immediate bond, even before they discover that Gio’s late wife was Sila’s beloved second-grade teacher. When an odd string of coincidences leads to Gio rescuing a young elephant named Veda from a failing circus, Sila and Mateo wind up with the most awesome summer job ever—caring for Veda. Sila connects to the young pachyderm on a deep level, realizing that, like her, Veda must really miss her mother. A reunion of either mother-daughter pair feels out of reach, but with a team of caring friends—maybe it’s not.

Author Holly Goldberg Sloan has another deeply heartfelt hit on her hands. Again employing the multi-POV device she uses so brilliantly, she lets readers see and feel the unfolding of these extraordinary events through various characters’ eyes. Veda’s POV is used sparingly but impactfully, and even the supporting animal characters—a flock of undisciplined flamingos, a ravenous bear, and a loyal dog—whose POVs we’re not privy to, are well-drawn, quirky, and fun.

Both kids are battling quiet storms within, which makes them interesting and empathetic. Gio is wonderfully complex. His desire to rediscover meaning in life, coupled with voluminous lottery winnings, propel him to take on caring for Veda, somehow feeling it’s something he has to do. His connection with Sila seems similarly fated, and their special bond serves as the glue for all of the characters. A story of hope, longing, love, and action, The Elephant in the Room will show middle-grade readers that things—people, animals, situations—are not always what they seem and that they’re not always as powerless over circumstances as they sometimes feel. 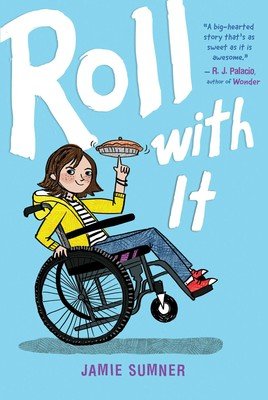 Roll With It was an easy choice for my to-read list because it deals with disability. As a disabled author myself, I feel disability representation in books for children is so important and I’m thrilled to see the number of books featuring this element of diversity growing. Author Jamie Sumner has a son with cerebral palsy—the same disability as her main character, Ellie—so I was confident that aspect of the book would be handled with authority and authenticity. What I wasn’t necessarily expecting is a story that packed such an emotional punch on so many different levels.

Ellie and her mom move in with Ellie’s grandparents to help out since her grandfather’s memory issues are getting worse. Life in her grandparents’ trailer park is not exactly ideal for Ellie physically and she dreads starting at a new school as not only “the new kid” but “the new kid in a wheelchair.” Before long though, she connects with two other classmates from the trailer park, the hilarious Coralee and ultra blunt Bert, and Ellie begins to love her new home. She must then convince her mom that they should stay put.

Ellie is relatable and plucky, with a touch of snarky sarcasm, all of which endeared her to me immediately. Her growth as a character had much less to do with the traditional “overcoming her limitations due to her disability” trope and much more to do with making friends, asserting herself, navigating the complex relationship between a tween kid and her mother, and handling her emotions related to her grandfather’s illness. She’s a regular kid with dreams of being a celebrity chef, who experiences the same feelings and challenges as lots of kids her age. The fact that she has CP and is a wheelchair user is neither the main focus of the story nor downplayed. Sumner strikes a perfect balance of making that aspect of Ellie’s life an integral part of the story without it be her only story. Similarly, Ellie’s Grandpa’s Alzheimer’s is treated deftly and not sugarcoated.

Roll With It is not only a fun and interesting read—it’s a great representation for middle grade readers who are wheelchair users themselves and for any reader interested in a moving story which provides insight into a POV not often seen in children’s books.

Karol Ruth Silverstein writes all genres of children’s books and screenplays. Her debut novel Cursed (Charlesbridge Teen, 2019) is loosely drawn from her experience of being diagnosed with a painful chronic illness at 13. Originally from Philadelphia, she now lives with her two exceptionally fluffy cats, Ninja and Boo. You can read a review of her novel here. 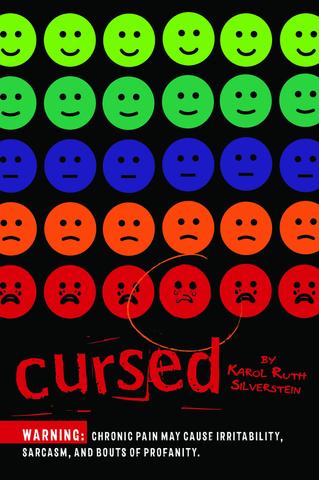 There’s a strong cinematic sense conveyed in Cursed because Karol not only hails from Philly where the story is based, but she also has a screenwriting background. It’s easy to picture every place described in the novel. From the city itself and Dr. Bloom’s Batch Pad, the school with its grueling long corridors to the nurse’s office where she spends a lot of time and becomes friends with Oliver. From the waiting room outside the principal’s office, her speech teacher, Mr. Jenkins’ classroom, to the music room where her crush Julio practices, and the doctor’s office where she gets her intravenous medication. Add these strong visuals to the already compelling, engrossing and downright funny storytelling and at once you are totally in Ricky’s head as she tries to cope emotionally and physically with her disability as she approaches age 15.