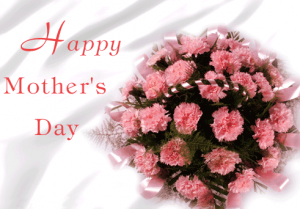 How do you celebrate Mother’s Day? With our recommendations for the best new Mother’s Day books around! And, whatever you may do, wherever you may go, take some time to read together with your children at home, in a park, on a train, at a bookstore or in a library. Books make memorable gifts and, with an added personal message, will be cherished for years to come. 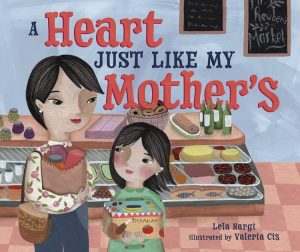 In A Heart Just Like My Mother’s, when Anna, who loves and admires her mother is inspired to help a homeless man by saving up her Tzedakah money, she realizes she and her mom share something in common—a big heart. This lovely picture book is a wonderful way to explain the Jewish tradition of performing an act Tzedakah which Nargi defines not so much as charity but doing the right thing by helping others. But it’s also the story of a little girl who starts out thinking she could never be as creative, funny or caring as her mother until she realizes what she has to offer. By collecting Tzedakah money and providing food for the homeless man, Anna’s selfless act of kindness brings her closer to her mother and proves to herself that she too has qualities worth being proud of. I love Cis’s illustrations too. There’s a warm, folksy feeling about them that adds to the positive vibe that emanates from the pages making A Heart Just Like My Mother’s such an enjoyable read. 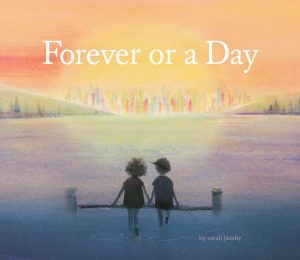 Forever or a Day
Written and illustrated by Sarah Jacoby
(Chronicle Books; $17.99, Ages 3-5)

With its starred reviews from both School Library Journal and Publishers Weekly, Forever or a Day by Sarah Jacoby will make a thoughtful gift this holiday for those seeking something at once out of the ordinary as well as heartwarming. It conveys its beautiful message with spare yet evocative text and in just 20 pages. At first I thought it was a picture book about the future, but then it dawned on me that it’s about being present and spending time together with loved ones and making meaningful moments now. Adults and children may experience different reactions when reading the book but that’s to be expected. Sophie Blackall, Caldecott Medal-winning and New York Times–bestselling illustrator of Finding Winnie, says it best: “Sarah Jacoby’s ethereal exploration of time rushes like a passing train, shimmers like a setting sun and allows us, just for a moment, to appreciate the beauty of standing still.” Prepare to be moved by the compelling art that complements the lyrical language of Forever or a Day. 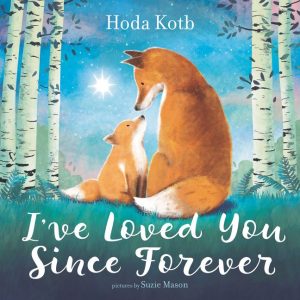 Precious pairings of mothers and and animal babies from bluebirds and bunnies to otters and owls fill the pages of Today show co-host Hoda Kotb’s debut picture book, I’ve Loved You Since Forever. Kotb adopted her daughter, Haley Joy, in February 2017 and her happiness at becoming a mother is infectious and evident throughout this delightful picture book. Gentle rhyme, a repeated refrain (there was you … and there was me), a rewarding wrap up and exuberant illustrations all work wonderfully together. I’d pick up I’ve Loved You Since Forever for any new parent on your holiday list. In addition to Kotb’s lovely language, there’s a sense of warmth and closeness from the special bond of parenthood depicted in Mason’s tender scenarios. Whether or not you’re an adoptive parent, I’m sure these lines will resonate with you as they did with me: Before otters swam together/and rivers reached the sea/there was you and there was me/waiting for the day our stars would cross/and you and I turned into we. Awww! 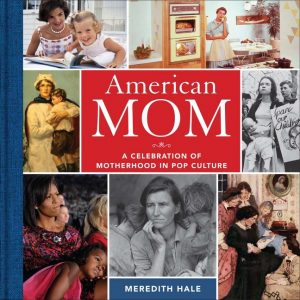 In 176 color pages and 12 clever chapters, author Hale deftly delves into the world of motherhood from various perspectives that readers will find fascinating. The introduction says the book “explores the changing role of motherhood through the images and shared cultural moments that have captured it best: magazines, advertisements, greeting cards, television shows, movies, songs, and other pop culture ephemera.” Choose a chapter at a time because this comprehensive and enlightening book is meant to be savored slowly (like a 1950s TV mom’s best casserole) and cannot be read in one or even two sittings. I love the breadth of the material that’s been included and am partial to the earlier chapters that cover motherhood in the eras before I was born including The Nineteenth Century, The Pre-War Years, World War I, The Roaring Twenties, The Great Depression, World War II, The 1950s (although note that American Mom does go all the way to present day 21st century). I learned, for example, that between “1885 and 1905, there were around eleven thousand magazines and periodicals published in the United States—and about 88 percent of the subscribers were women,” that Betty Crocker was a fictional character, that Eleanor Roosevelt “broadened the role” of first lady and that on I Love Lucy they couldn’t say the word pregnant on the show! Through Hale’s insightful lens on motherhood, we’re taken on an entertaining jaunt through fashion, food, first ladies, feminism, photography, film and literature that pays tribute to the ever changing role of mothers in American life and touches on aspects of this expansive topic in ways that will interest every reader, male or female. 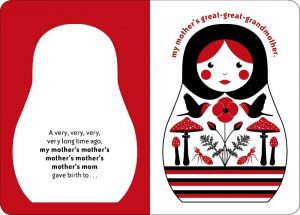 If you’re looking for a fun, original board book for Mother’s Day, look no further than
From Mother to Mother
Written and illustrated by Emilie Vast
Translated from French by Julia Cormier
(Charlesbridge; $7.99, Ages 0-3)
Simple in concept, but rich in design elements, this 14-page board book is perfect for little ones who adore the pull-apart Matryoshka dolls. Every other page takes a child back several generations of a mother’s mother’s mother’s mother who in turn gave birth to a child eventually bringing the reader to the present. “And not long ago, I gave birth to you … my very own child. A mother’s love goes on and on and on.” What a beautiful sentiment to share with a young child while cuddling them close and showing them all the different colored pages, each with unique and nature-inspired artwork. There’s also a version for dads!