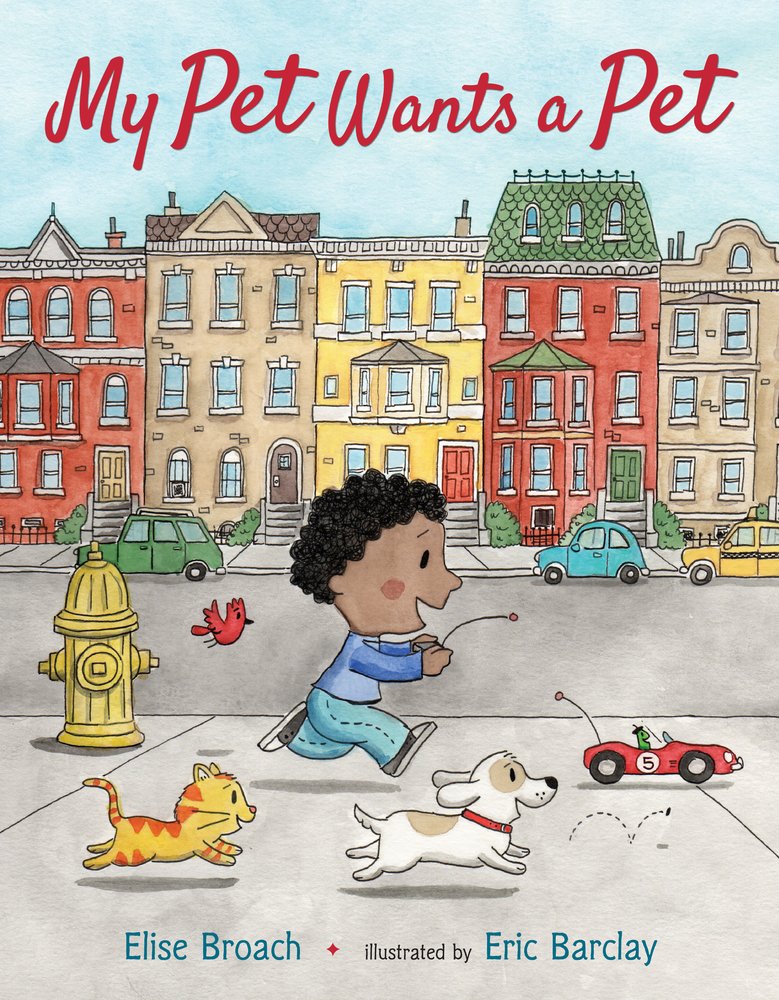 When I go to my local bookstore, I’m always on the lookout for a surprise–something new, that I haven’t heard of, that I know the kids in my book club (mostly 3- to 5-year-olds) will love. MY PET WANTS A PET, written by Elise Broach and illustrated by Eric Barclay is one of those books.

Broach’s story starts off in familiar territory. The main character wants a pet. He begs, and begs, and begs until, finally, his mother says YES! Barclay’s uncluttered, colorful illustrations show the boy and his new puppy playing, cuddling, riding a bike, and before long we leave familiar territory behind as the puppy realizes he wants a pet, too. Mom thinks this is a “terrible idea” but, puppy and boy prevail. And so it goes, throughout the whole story with one pet after another realizing that they, too, want something to care for. In each case, the pet chooses a pet that would, under normal circumstances, be considered a rival or–worse yet–food. But this is not a Jon Klassen book and no one gets eaten. The animals and insects are good to each other and when they do chase it’s “all in good fun.” Everyone is content, except one character–Mom. She progresses from concerned to harried to annoyed as more and more pets invade her house. (Look closely at the illustrations to see why!) The boy formulates a plan to console her, but I won’t tell you what it is. You’ll have to read the book!

Simple illustrations and an engaging story make MY PET WANTS A PET perfect for story time with a large group of kids. Even from several feet away, listeners will catch details in the illustrations that add humor and warmth to the story. And Broach’s text allows readers to anticipate what’s coming, but still manages to keep us on our toes. After all, we may think we know what’s going to happen, but when a bird takes a worm for a pet there’s no telling how things will end.

Click here for the publisher’s page to find a downloadable activity guide.
See another recent review by Colleen Paeff here.