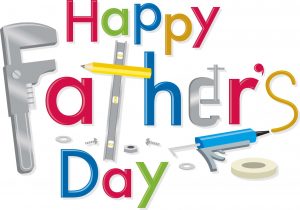 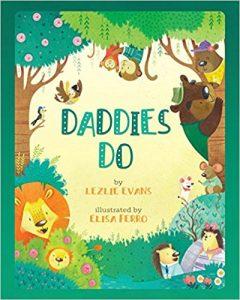 Over a dozen different kinds of animal dads demonstrate why they’re so beloved in this rhyming 32-page picture book. Offspring ask “Who makes you feel big even though you small?” or “Who sits in the front row when you’re in a play and takes lots of pictures on your special day?” Do we know the answers? Yes! Devoted dads do all sorts of things to make their youngsters feel special and Evans has selected some important ones including encouragement, validation, playfulness, listening and best of all, love! “Who gives you a bear hug and tucks you in tight? Who whispers ‘I love you,’ then turns out the light?” From anteaters to walruses, Ferro’s charming illustrations of animal dads and kids use soothing jeweled tones and fill every two page spread completely. This technique allows readers to occasionally get a glimpse of several daddy child relationships before a page turn and also means more animals such as elephants, hedgehogs, lions, monkeys, mice, octopi, owls, pandas, peacocks, penguins and polar bears can be included in the story. “She creates her artwork primarily in gouache, colored pencil, and ink before tweaking digitally.” Daddies Do is a wonderful addition to Father’s Day themed books although this one clearly can be revisited over and over again any time of year. 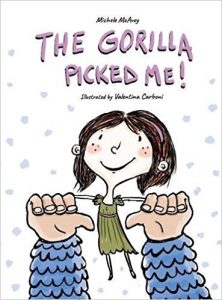 School dances are hard enough to begin with, but when your confidence is low and your dad, who also happens to be your date, steps out for a while at the spring dance and you’re left sitting there on your own, can you feel any worse? Such is the case with Olive. She’s the narrator of The Gorilla Picked Me!, a refreshing and rhyming look at how this self-described “plain, simple and ordinary” main character has experienced her school life up to this point. Her clothes are second-hand, she’s chosen last for teams and the only Valentine she receives is a discarded one. But when the special guest at the school dance, makes his appearance, things start looking up for Olive. This silly, dancing blue gorilla playing a kazoo is the life of the party and, out of anyone there, he picks Olive to join him on the dance floor. They swirl and they twirl and this magic moment lifts up Olive like nothing else has. After Gorilla departs and Olive’s father returns, her one regret is that he missed her star performance. But did he? Look for clues planted as to the gorilla’s identity and have a conversation about the remarkableness of being ordinary. Warmth and love emanate from Carboni’s illustrations that complement McAvoy’s heartwarming story of a dad’s clever way of elevating his child’s self-esteem. A pleasing pick for Father’s Day. 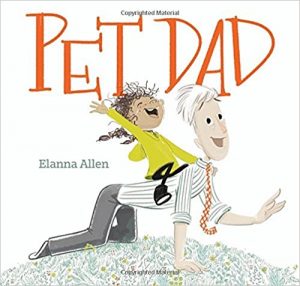 My first suggestions for Elanna Allen’s adorable picture book, Pet Dad, is to not miss the end papers in the front because they’re hysterical and so many people skip this part of a book. It’s also how you know you’re in for a treat, not a doggy treat, a reader’s treat! “Plum wants a pet. Plum’s dad does not want a pet” is how the story begins as she drags then begs him in front of the pet shop. But since her father’s rather adamant against and she’s rather resolute for, she’s not leaving without a dog. Dad is just going to have to fit the bill! She even names him Schnitzel. He may seem to enjoy her attention at first, but Dad or Schnitzel is not responding well to Plum’s attempts to treat him like any other pet. He doesn’t want to eat the food she’s prepared, get paper-trained or sleep at her feet. Can you blame him? At the park the next day, Schnitzel is still not behaving like Plum would like and she acts out in frustration. In fact, rather than Pet Dad getting punished, it’s Plum who must contemplate her unruly actions. During a time out, Plum realizes that offering a hard-to-refuse reward to her dad so that he’ll cooperate is the way forward. After such a positive response and with the help of lots of hugs, Plum and her dad are on track to having a most mutually loving and enjoyable relationship.Told tongue-in-cheek with hilarious, pet-centered illustrations, Pet Dad is an ode to the wonderful daddy daughter dynamic worth celebrating on Father’s Day. 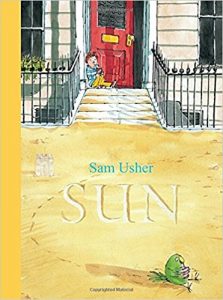 Sun by Sam Usher follows Rain and Snow, two previous picture books by this talented author/illustrator. The first thing that struck me about this beautiful picture book is the front cover. A little lad sits on the stoop of his home or someone else’s. He’s sipping something from a cup, the inviting red front door is partially open and sparkling sand dusts the steps and leads to the sidewalk depicted as a beach, replete with shiny sandcastle and a green parrot, also sipping away at something! If that doesn’t spark one’s imagination, I don’t know what will! It’s soon learned the boy is staying at his Granddad’s and clues to the adventure that awaits him are sitting right there on his bed in the first illustration, a pirate and a bow-tied monkey toy. Despite being the hottest day ever, Granddad suggests a picnic and, after loading up with all the “necessary provisions,” the pair set off in search of the perfect spot. As Granddad navigates with a map (is that a pirate flag on the sandcastle?), the unnamed narrator remains on lookout. Does he notice that some trees in the distance seem to resemble a sailing ship? Shady spots seem most appealing on a scorcher and eventually the two end up by a cave. Lo and behold, someone has gotten there before them! A perfectly pirate-y dinghy is down below (the main ship is off in the distance) and a little boy is at the bow just in front of a peg-legged pirate and other non-intimidating crew. Treasure is unburied, intermingling has begun between Granddad, Grandson and pirates, and a picnic can be had at last! The second to last illustration, a spread of the picnic party onboard the massive pirate ship is delightful and warrants intense inspection since so many fun things can be found on the Galleon’s many levels. Can you spot the parrot from the first page? I suspect the main character might be named Arlo since Usher’s dedicated the book to him and magnets with his initials can be found on the fridge in the last illustration. Whether the pirate adventure is real or imagined, there’s a good time to be had by all who embark on this jolly grandfather and grandson journey. 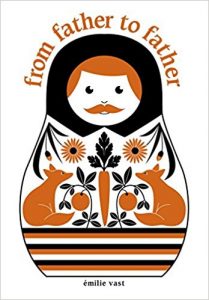