As part of the March 2013 celebrations for the National Education Association’s Read Across America Day, Grand Park has created Grand Park’s Downtown BookFest, a multi-faceted, multi-generational community event that salutes the enjoyment of reading and the importance of literacy.  Grand Park’s Downtown BookFest takes place on Saturday, March 2, 2013 from 11:00 a.m. – 6:00 p.m. at Grand Park in downtown Los Angeles, from Grand Avenue to Hill Street (Blocks One and Two of the park).  Park visitors will enjoy a wide variety of activities inspired by the simple pleasures of reading a good book under the blue sky in an urban green setting.

Designed for families and book lovers of all ages, Grand Park’s Downtown BookFest features readings from independent book stores, children’s story circles, crafts for children, musical performers, food trucks and other activities based on the power of the written word.  In addition, Grand Park will inaugurate four little free lending libraries, which are miniature libraries that operate on the honor system, allowing visitors to “take a book, leave a book.”  The concept, spearheaded by the nonprofit organization, Little Free Library, is a grass roots movement to encourage reading and provide easy access to books.

• Readings and a pop-up book store presented by The Last Bookstore and Writ Large Press, representing the authors and publications of 25 Los Angeles-based independent publishers;

• Book sales and literacy information provided by non-profit writing and tutoring center, 826 LA;
• Book swaps and giveaways by Libros Schmibros;
• Children’s crafts presented by the Central Library and Ryman Arts, which provides teens with free access to visual arts education;
• Performances by DJs Phyz Ed and Danny Holloway;
• Performance by bilingual children’s author, educator and recording artist, José Luis-Orozco; and
• Presentation by the first poet laureate of Los Angeles, Eloise Healey, who was named to this newly created position by Los Angeles Mayor Antonio Villaraigosa in December 2013.  Healey will open the event and read from some of her poetry.

Current park programs include Lunchtime Yoga retreat (Wednesdays and Fridays) as well as Lunchtime Concerts in Grand Park (Tuesdays).  More information and an event calendar can be found at http://grandparkla.org/ 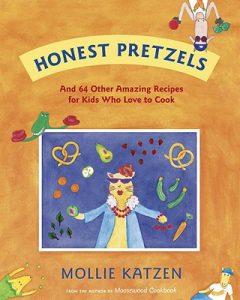 I have been using Molly Katzen’s The Enchanted Broccoli Forest Cookbook since I got married, some 21 years ago. Naturally I was delighted to be able to review her latest cookbook, Honest Pretzels: And 64 Other Amazing Recipes for Kids Who Love to Cook now in paperback. What a great name for a cookbook for kids, huh? And the cover is darling! Molly does her own cheerful illustrations, and I love them! She starts her book with two special messages: one to kids and one to the parents and then gets into basic cooking techniques and safety issues. How does a Giant Baked Pancake Puff sound for breakfast? Or a Grilled Cheese and Broccoli Sandwich for lunch? All the recipes you’ll find in here are vegetarian and are nutritious and delicious. Mysterious Dipping Sauce for Vegetables and Tofu caught my attention, as did Peanut Butter Do Dads and Purple Passion Power Shakes. Yum!

What makes this 178-page book perfect for kids to use is the fact that the author simplifies the cooking/baking process by breaking each recipe down into steps with basic illustrations. Before the recipes are listed, she also writes a beautiful introduction to the dish, explaining what the food is and why it tastes so good. Honest Pretzels is a beautiful cookbook that teaches kids the basics of cooking healthy vegetarian dishes and how to have fun while doing it. What a great gift for the child in your life. 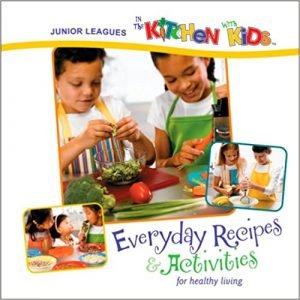 The Junior League has published over 200 popular cookbooks since 1940. Their latest, In the Kitchen with Kids: Every Day Recipes & Activities for Healthy Living, is an essential cookbook that was published to not only get children interested in cooking, but to teach them all about healthy eating. I love the fact that, although cooking or baking these recipes requires adult assistance, this book was written for children.

Beautiful illustrations, easy to follow recipes and complete nutritional information ensure that this cookbook will not just sit on the shelf. The recipes look delicious, and are essentially foods that children love, prepared in creative, healthy and appealing ways. How do Never-Fail Banana Muffins or a Make-a-Meal Sunrise Smoothie sound for breakfast? What about a Bunny Salad or Gobble-Up Turkey Burgers for a power lunch? And Porcupine Meatballs or Meat Loaf Cupcakes with Mashed Potato and Carrot Icing for Supper? There are some beautiful desserts too, like Strawberry Yogurt Pops and Fruit Salsa with Cinnamon-Sugar Crisps.

In the back of the book you’ll find a food pyramid and nutritional guidelines that teach children about healthy eating in a most easy to understand way. If kids can learn to cook their own delicious food from an early age, they’ll be more likely to make healthy choices for life. In the Kitchen with Kids is a perfect way to get them started.

Debbie Glade is the author, illustrator and voice talent of the award-winning children’s picture book The Travel Adventures of Lilly P Badilly: Costa Rica, published by Smart Poodle Publishing. She visits South Florida schools with her reading, writing and geography programs. For years, Debbie was a travel writer for luxury cruise lines. She writes parenting articles for various websites and is the Geography Awareness Editor for WanderingEducators.com. She blogs daily at smartpoodlepublishing.com.