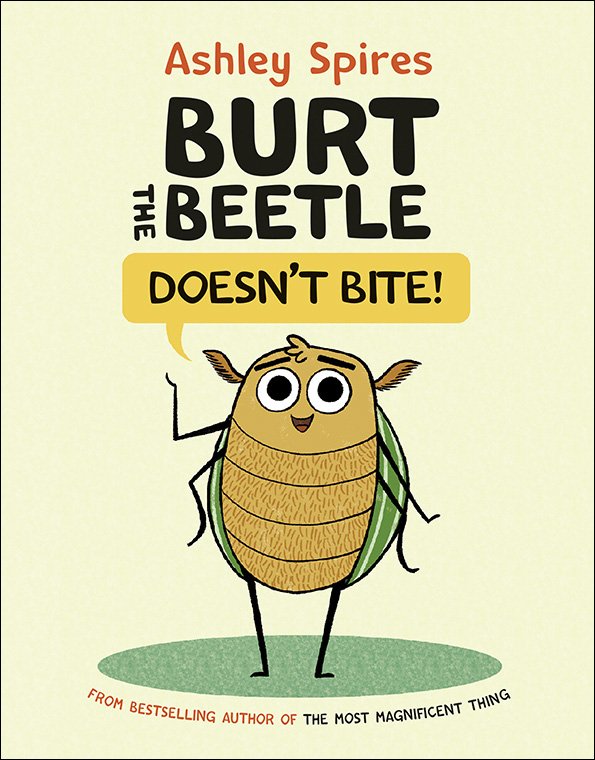 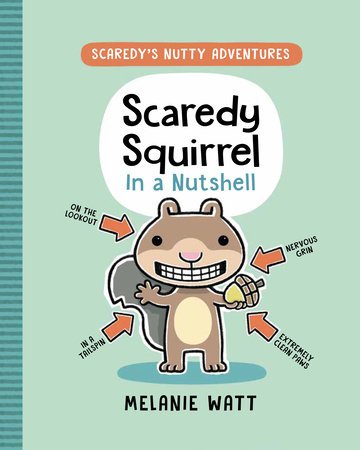 WARNING! This book is absolutely … NUTS!

Award-winning author and illustrator Melanie Watt, well known for her Scaredy Squirrel picture book series, has created her first graphic novel, Scaredy Squirrel in a Nutshell, featuring a squirrel beset by many (and often improbable) fears about life outside his beloved nut tree. To his credit, Scaredy Squirrel confronts each challenge with an elaborate and hilarious action plan that’s often doomed to failure. From the potential alien landing to deadly dust bunnies, Scaredy Squirrel not only has a plan but a backup as well (play dead).

Since childhood, Scaredy Squirrel has kept himself and his nut tree safe from dreaded “trespassers” who could damage his tree. Who knows when a mammoth may want to uproot it? Or a cat might scratch it. So Scaredy Squirrel has developed a strategy to protect the tree. He places objects around his tree to distract the trespassers, such as a fake tree for the mammoth to uproot or a scratching post for the cat.

However, there’s a downside to this ambitious plan: these objects get dusty and from the dust springs notorious dust bunnies! So this quick-thinking squirrel comes up with a detailed plan to prevent dust bunnies … vacuum all the decoy objects! All well and good until the vacuum gets clogged and now Scaredy Squirrel must develop a plan to unclog the vacuum cleaner. As you can imagine, more problems emerge which entail more plans and greater chaos. Inevitably (despite playing dead) he finds himself face to face with a real bunny who would like to be his friend. Which of course necessitates a new plan …

Watt’s familiar cartoon-like illustrations go nicely with the graphic novel format. Simple geometric shapes are used to create the characters and setting. Faces are wonderfully expressive. Panels are well organized on the pages with a clean and uncluttered look, making this book perfect for newly independent readers. Witty word plays and expressions such as “going out on a limb” and “dust bunnies,” keep the narrative lively and make this a good read-aloud as well. Delightfully quirky features include a “Nutty (Table of) Contents,” and some silly and interactive features to be taken before it is “safe” to begin the story.

Parents, caregivers, and teachers are sure to appreciate that, despite the zany humor of the book, Scaredy Squirrel manages to demonstrate, in a light-hearted way, how children can face their fears and develop problem-solving skills such as writing down action plans, to face real-life challenges. While the age is listed as 6-9, younger children would certainly enjoy having the story read to them.