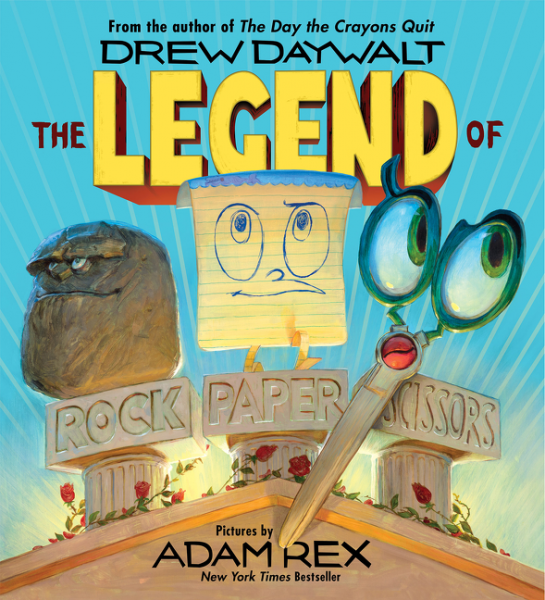 Hitting shelves this June is The Day the Crayons Quit by Drew Daywalt and illustrated by Oliver Jeffers (Philomel Books; $17.99; ages 3-8). Reviewer Rita Zobayan couldn’t peel herself away!

Art comes to life in the delightful new picture book. Duncan simply wants to color, but a stack of 12 letters in his school desk reveals that his crayons have feelings and opinions on not only his use of color, but also on their own relationships with each other. Poor Pink is tired of being relegated as only a “girls’ color” and demands usage! Green is quite content with its lot in life, but is worried about other crayons. Blue is appreciative, but exhausted from coloring oceans and skies. And, boy-oh-boy, will your child laugh out loud when Peach’s dilemma is revealed!

Humor, imagination, and a great sense of children’s language combine to make up the content of the letters, and each letter is cleverly illustrated in a child’s handwriting style. Here is Red Crayon’s communication to Duncan:

It’s me, Red Crayon. We NEED to talk. You make me work harder than any of your other crayons. All year long I wear myself out coloring fire engines, apples, strawberries and EVERYTHING ELSE that’s RED. I even work on holidays! I have to color all the Santas at Christmas and all the hearts on Valentine’s Day! I NEED A REST!

The illustrations are spot on: you really believe that you’re looking at a child’s art. They creatively capture each of the crayons’ dilemmas—even Purple’s assertion that if Duncan doesn’t “start coloring inside the lines soon…I am going to COMPLETELY LOSE IT.”

The Day the Crayons Quit is a great read, and artist or not, children will delight in the humorous premise and colorful artwork.

For other Oliver Jeffers books, click here. Click the titles for our reviews of Stuck and This Moose Belongs to Me.