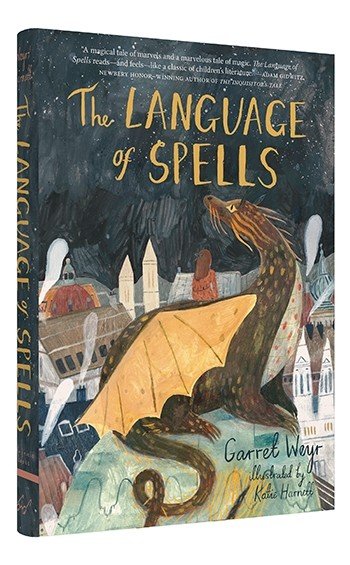 Meet Henry Alfred Grummorson, the newly turned six-year-old descendant of King Arthur of Round Table (and I’m not talking pizza) fame. On his birthday Henry seeks to follow in his great-great-great-great-great-great-great-grandfather’s footsteps and find adventure around every corner. Alas, the first bit of excitement he encounters is a smoke-rings blowing Dragon, not the fire-breathing one he so desperately hoped to battle.

Here parents can channel their best British accent when reading the bold print aloud: “BEHOLD, VILE WORM! I, HENRY ALFRED GRUMMORSON, A KNIGHT OF KING ARTHUR’S BLOOD, DO HEREBY CHALLENGE YOU TO A FIGHT TO THE UTTERMOST!” Henry’s demand to fight comes to naught when the docile Dragon suggests he look for the Cyclops, high in the mountains. The young lad, eager to uphold the family name, goes in search of the Cyclops who, like the Dragon, is more interested in playing, this time in a staring match. After that it’s onto a chess-playing Griffin and a less-than-lethal Leviathan, all wanting just one thing, friendship.

Will Henry discover that making friends beats doing battle? Kraegel conveys this and other important messages including: perseverance pays off, friends come in all shapes and sizes, appearing when we least expect them and stereotyping gets it all wrong every time because as the book shows, big does not necessarily mean one’s bad or a bully.

Kraegel deftly blends his beautiful water color and ink illustrations with his well-timed text as readers follow along on Henry’s quest. Youngsters will want to join in repeating Henry’s loud declarations. Maybe even trying out their own Monty Pythonesque voice because the dialogue really calls for having fun with this story. My only recommendation is that parents first try this picture book out in the daytime (before knighttime) what with all Henry’s shouting and exclaiming, it might not be conducive to lulling your littlest ones to sleep!

Seraphina ($17.99, Random House Book for Young Readers, ages 12 and up) is reviewed today by Jason Carpenter.

When George Lucas conceived of his Star Wars galaxy, he saw beyond the here and now of giving the people a rousing good yarn. He envisioned a mythology, a world logical and responsible only unto itself, with fantastical creatures that nonetheless felt of flesh and blood.  And like Tolkien before him and Rowling after, the devil- or the grip of imagination- is in the details.

Rachel Hartman infuses her expansive new novel Seraphina– the saga of an uneasy alliance between mistrustful species (sound familiar?) and the young royal court’s musician who may end up being the key to ultimate harmony or lynchpin to inevitable war- with an eye for Joseph Campbell-like character and plot machinations and an adherence to a painstakingly created medieval alternaverse.

The oppositional species are, in this case, humans and dragons, and as Seraphina begins, a murder of a member of the royal court bearing the trademark savagery of a dragon attack threatens to derail the anniversary celebration of a historical, but tenuous, peace treaty between the two sides. In the midst of this pomp, Hartman also fully realizes the emergence of a young girl’s identity, the fiercely astute Seraphina, torturous as it may be to discover that her mother was a dragon. In a genre dominated by young empowered male principals, it’s  a wonderfully acute choice.

Seraphina’s intended demographic, the young and young-at-heart, has proven they can handle the layered storylines, philosophical yearnings, and literal hundreds of major and minor characters that populate the modern fantasy epic. Indeed, Harry Potter’s enduring legacy may just be that it made digging intellectual sword and sorcery lit cool for a fresh generation of make-believers. This novel follows that template elegantly, and at over 450 pages with accompanying glossary, it’s weighty, as well.  The payoff- and it’s not the metaphoric allusions to our own world’s penchant for xenophobia- is in the small quirks of some strongly drawn supporting characters, particularly the reluctantly compassionate dragon mentor Orma, who cares for Seraphina in a way that his dragon demeanor would be loathe to reveal.

Seraphina does rise to rousing good yarn status, but its greatest triumph is in depicting grotesqueries that are anything but and a world that often doesn’t feel that far, far away after all.