The Perfect Percival Priggs
Written and illustrated by Julie-Anne Graham
(Running Press; $16.95, Ages 3 and up) 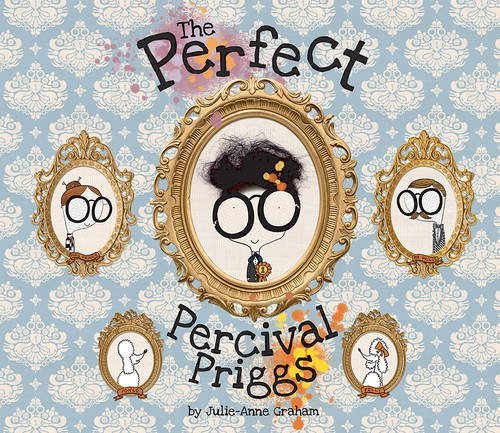 Everyone in the family will love this silly and heartfelt story about doing too much, and trying to be perfect!

Percival’s parents are perfect and they have all the awards to prove it. Percival wants to be perfect, too. He enters every competition, for everything, including the things he doesn’t even like. He’s sure that if he doesn’t do this, his parents won’t love him anymore.

But, being perfect is quite exhausting! So, Percival comes up with a perfect plan to make things easier. Only, it doesn’t. It just makes a big mess!

That’s when Percy finds out that being perfect is not what makes his parents love him. They show him all of their mistakes hidden away in the attic.

It’s then that Percy learns that doing what you love, and working hard at it, is what really matters.

With fun and wonderfully detailed illustrations, and just the right amount of text to tell the story, this book is, well … Perfect!

To learn more silly facts about her, go to joannbanks.com

Squashed inbetween a pet shop and an ice cream store is a magical place called The Change Your Name Store!

Did you want to change your name when you were a little kid? I sure did! I’ve always wondered what it would be like to have an exotic sounding name.  How cool to be a Ludmila from Russia, a Lenka from the Czech Republic or maybe an Anneke from South Africa!  Well in The Change Your Name Store written by Leanne Shirtliffe and illustrated by Tina Kügler (Sky Pony Press, 2014, $16.95, Ages 4-8), you can do just that because a shiny, nice new name is what’s for sale.

“But one tiny item
she longed to throw out.
My name! It’s so boring,
so blah,” she would pout.

So what happens when young Wilma gets to the store? What do you think she finds out? The proprietor, Ms. Zeena McFouz, is there to assist her customer. Yes, she’ll help her choose. But one rule applies. Wilma must try out the name which involves traveling to where the name comes from. That is absolutely my favorite part of this delightful picture book and it will be for kids, too. Half the fun is looking through Kügler’s cheerful artwork to search for recognizable names which are scattered throughout the store.

Wilma first selects Babette Bijou, but after traveling to Paris and feeling a bit odd with her red beret and café-au-lait, Wilma picks another name. Trying out Samiya bint Sami al Sala brings Wilma to a market in Bahrain where she soon feels overwhelmed by heat. Kids will enjoy the repetition Shirtliffe employs after each of Wilma’s journeys.

And when she returned, she said with a start,
“Oh no, that’s not me. I can’t play that part.”

Back at The Change Your Name Store, Wilma’s still got two more names to experience before she realizes the most special name, the one meant just for her, is Wilma Lee Wu, her own name! Rather than discover she’s supposed to be another, Wilma learns that it’s actually being herself that is most ideal of all.  The message here is positive and shared in a whimsical way: Wilma Lee’s simply one in a million, so Wilma Lee she will stay!