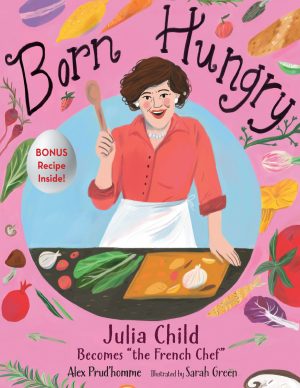 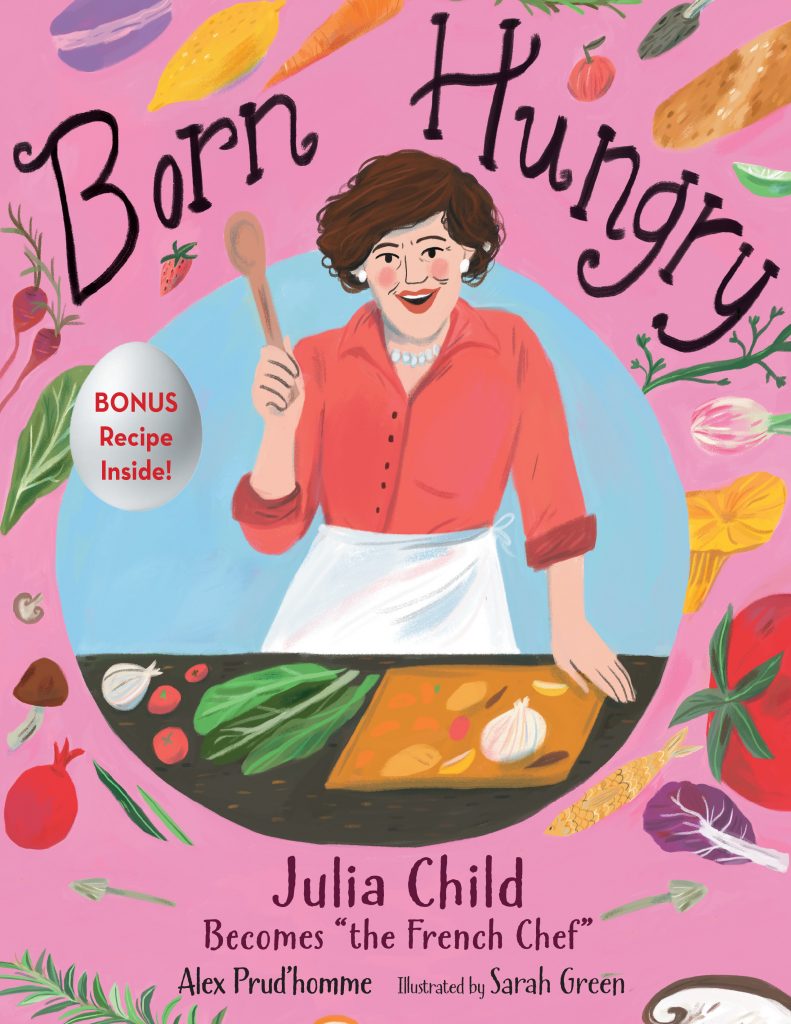 ★Starred Review – The Bulletin of the Center for Children’s Books

Julia Child’s grandnephew and the coauthor of her best-selling autobiography, My Life in France, has written an irresistibly delicious read if a picture book can be described that way. And, when coupled with Sarah Green’s gorgeous, mouth-watering illustrations, you might just have to run out and grab yourself a pain au chocolat to satisfy your craving after finishing Born Hungry.

This picture book memoir chronicles the travels, tastes, and meals that Julia Child experienced throughout her life, ultimately influencing her foray into cooking and broadcasting career as TV’s first-ever celebrity chef.  One apt and popular quote, “I was born hungry, not a cook” really sums up the essence of what this engaging bio is all about.

Readers meet the young Julia McWilliams who wore “size twelve sneakers, stood six feet, two inches tall, played basketball, laughed loudly, and was curious about everything.” The author goes on to explain that Julia’s activity led to her having a rather large appetite. But because she grew up with a cook, she wasn’t encouraged to learn how to do so herself. Clearly, that did not stop her interest in food.

Early in her career during WWII, she worked in Ceylon (now Sri Lanka), as a clerk typist for the US spy agency called the OSS. That posting introduced her to a wealth of new foods and it also introduced Julia to her future husband, Paul Child, who worked in the office next to hers. They shared the love of food, books, and travel. And while her love of cooking had yet to emerge, she did invent a recipe for shark repellant!

Back in the states after the war had ended, Julia made it her mission to learn how to cook. Now married, she thought cooking a meal would impress her husband. She even took a class but her attempts left something to be desired.

During a trip to Rouen in France, however, Julia had the best meal of her life, one that stayed with her and prompted a renewed interest to learn how to “make such a feast.” With Paul stationed in Paris for work, Julia enrolled in the renowned Le Cordon Bleu cooking school. She was the only female student and worked hard to hone her skills. She even read cookbooks in her free time! “I came to the conclusion I really must be French, only no one had ever informed me.” With her newly acquired expertise and love of French cuisine, Child eventually opened a cooking school with two friends.  She was committed to sharing what she’d learned with an emphasis on how “time and care” along with using fresh ingredients and reading the recipe before attempting to cook were key to creating “a thoroughly satisfying meal.”

In the back matter, a comprehensive five-page Author’s Note details Julia’s life after 1961 when the couple retired from diplomatic service and relocated to Massachusetts. It’s in these pages readers learn about the cookbook that “changed Julia’s life.” Mastering the Art of French Cooking, written by Child along with two friends (and still in print), introduced an exciting new cooking approach to the American consumers who were hungry themselves to move on from canned goods to fresh ingredients in recipes that were fun to make. From there it was a public TV cooking show, followed by a long and illustrious career in the public eye. The rest, as they say, is history. If your appetite’s been whet, take advantage of Julia’s scrambled eggs recipe that is also included.

In Born Hungry, Prud’homme has perfectly captured Child’s zest for life (and the food in it) as well as her infectious personality that contributed to her enduring success. Green’s retro-looking art pops off the page and colorfully conveys both emotion and a keen sense of Child’s passion. For any parent or youngster who is curious about food and cooking, or looking for a positive example of a strong, influential woman who followed her dream, this picture book is a joy to read. 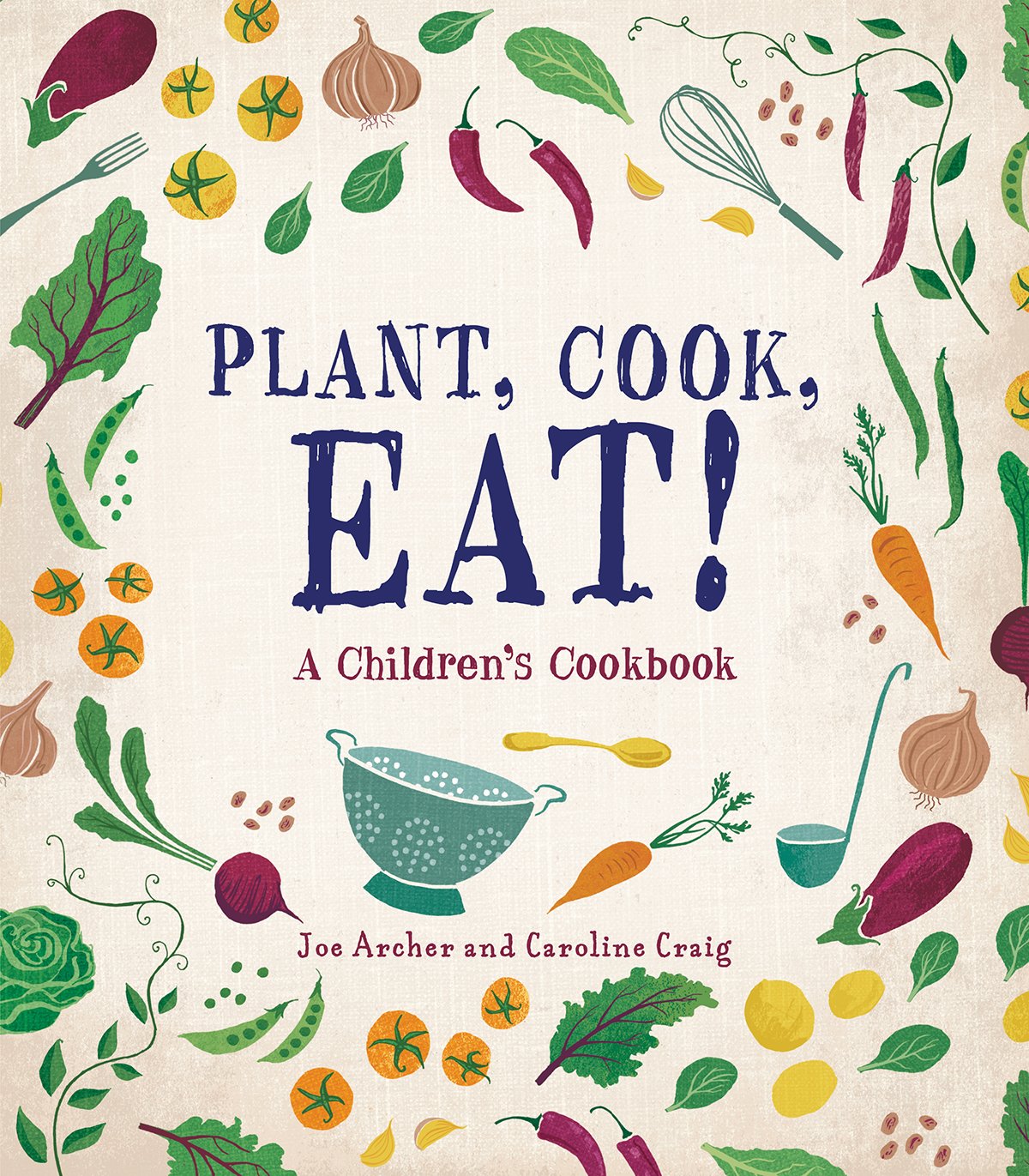 by Joe Archer and Caroline Craig 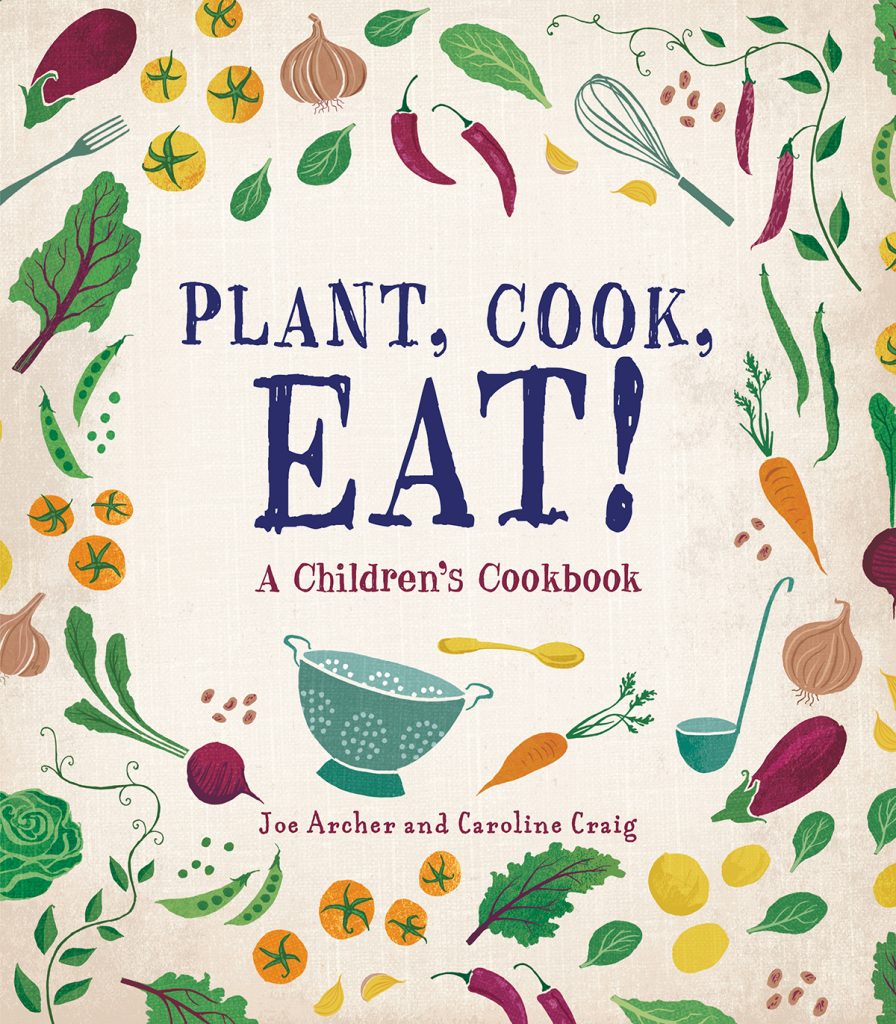 Joe Archer and Caroline Craig’s middle-grade Plant, Cook, Eat!: A Children’s Cookbook covers food from seed to table with easy-to-understand text and full-color photos or images throughout. The helpful introduction includes information about plants: what parts we eat, how they reproduce, and how we can help them grow with the right amount of warmth, light, nutrients, and water. Learn what healthy soil and compost consist of, then how to choose and prepare an ideal location for your garden. Before long, you’re ready to harvest, eat, and cook.

Whether it’s tomatoes, potatoes, lettuce, or peas, you’ll find an accompanying recipe where that food shines as a star ingredient. Snip some young zucchini then make crunchy Zucchini and Polenta Fries, or dig up those beautiful beets for an indulgent Chocolate Beet Cake.

I like how cookbooks provide recipes to take us beyond our usual fare. This book, however, goes steps beyond by inspiring us to grow vegetables, maybe for the first time. We transformed our abundant crop of Swiss chard into Chard-Noodle Stir-Fry; our towering kale became Kale Pesto Pasta—an appreciated change from the usual basil-dominant pesto.

Kids will enjoy the rewarding experience of eating what they’ve grown whether directly from the plant or in a delicious recipe. One of my favorite facts was that cranberry beans are cultivated for their dried seeds; they’re ready to harvest when you give the pods a shake and the beans rattle inside. We’re planting that next!

Joe Archer works at Kew Gardens as Head Horticulturalist in the kitchen garden and has appeared on BBC in the Kew on a Plate television program with Raymond Blanc. He lives in England.

Caroline Craig is a food writer from London and the author of The Little Book of Lunch adult cookbook (Regan Arts) and The Cornershop Cookbook (Random House UK). She’s also a columnist for Guardian Cook. She lives in England.

With illustrations by Harriet Russell 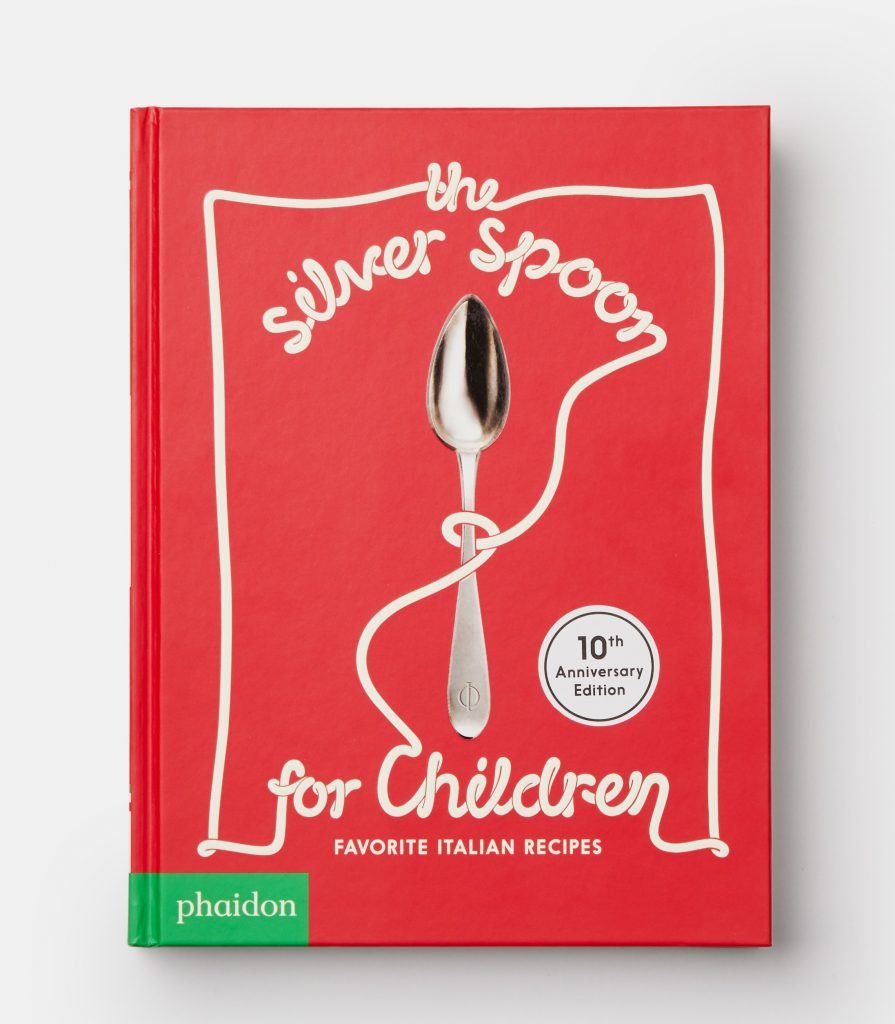 The popular and influential Italian cookbook for children, The Silver Spoon for Children, has been updated for its tenth anniversary with a newly designed edition. Forty traditional recipes show kids and tweens it’s easy to create delicious meals from a few, quality ingredients. The opening pages include some background about Italian cooking, followed by equipment identification, and helpful techniques—a good place to start if your child is new to cooking, or, needs a review.

Kids comfortable in the kitchen can dive right in, selecting relatively straightforward snacks like Prosciutto & Melon, or making their own dough (for Pizza, Pasta, or Focaccia), or testing delectable desserts such as Hazelnut Cake or Fruits of the Forest Ice Cream. Each recipe has four pages, enticing the reader while clearly conveying the instructions. Recipes begin with an overview listing ingredients alongside a full-page color photograph of that dish. The next two pages have written directions beside illustrations, teaching in two different ways.

Our ten-year-old daughter chose to make Baked Maccheroni with Parmesan and we were pleased with the tasty results. This recipe has simple ingredients but requires some diligence to properly complete the sauce, developing it from roux to béchamel. (What a difference from boxed Mac & Cheese!) As with many of these Italian staples, once a child has mastered a basic recipe, they can add their own flair or vary the ingredients each time thereafter.

While many recipes were familiar favorites, I was happy to discover new gems such as the Banana Cream dessert. It calls for just six ingredients that we usually have around the house and can be assembled in minutes—the perfect weeknight treat.

Parents, if you’re using this cookbook more than your child, there’s also the new and luxurious The Silver Spoon Classic adult cookbook. Put both on your holiday wish list, or treat yourself! Pair the books with an apron or wooden spoons and a whisk for the perfect gift year round. 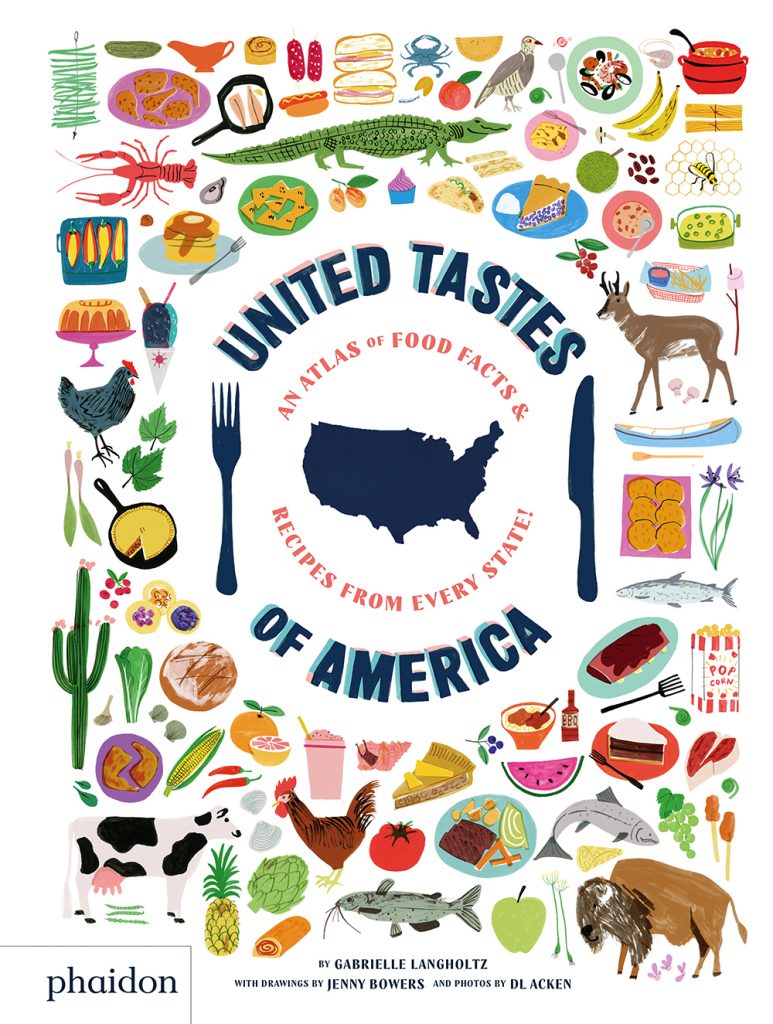 Take a road trip with the United Tastes of America: An Atlas of Food Facts & Recipes from Every State! by Gabrielle Langholtz, a gorgeous cookbook for ages seven and up. Regional recipes are listed in alphabetical order by state (Guam, Puerto Rico, the US Virgin Islands, and Washington, DC, are included). Each location begins with two pages of fun facts surrounded by vibrant art; a full-color photo and clearly explained recipe follows. Because we had freshly picked blueberries, we tried Maine’s Blueberry Muffins recipe. It was delicious, and a good base recipe for swapping in other kinds of fruit.

The recipes are indexed by level of difficulty as well as in a standard index where you can search for ingredient (potato), cooking term (braising), or meal category (desserts, snacks). This handsome book would be an ideal gift for your foodie relatives and friends who live in other countries, or a lovely addition to your cookbook collection.

I agree with author Gabrielle Langholtz that, “Food is one of the best ways to learn about a place—its harvests, its history, and its people.” Langholtz was the award-winning editor of Edible Manhattan and Edible Brooklyn, the head of special projects and publicity at the NYC Greenmarket, and authored The New Greenmarket Cookbook (2014), and Phaidon’s America: The Cookbook (2017). She lives in Pennsylvania (state recipe, Soft Pretzels). Take this book on tour with you the next time you travel!