TOO STICKY!
Sensory Issues with Autism 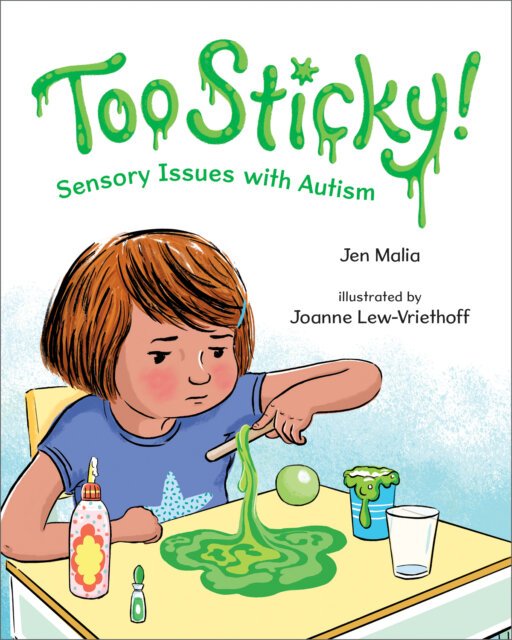 Holly loved experiments.
But not today.
It was slime day.
And she didn’t want to
touch anything sticky.

My son has sensory processing issues which we first noticed when he was a baby. He cried when hearing the vacuum cleaner, coffee grinder, car horns, and blaring music. As he got older he also actively avoided loud people, shouting and rough and tumble behavior from his peers. These were not the only things that clued us into his sensory challenges. He didn’t like touching sand or walking on it, and never got into Play Doh, unlike his older sister, because of the smell and consistency. His diet was and still is limited, but he’s faced a lot of these sensory issues head on and has learned ways to adapt. He even traveled to Japan last summer, tried a host of new foods and was flexible when encountering the many different customs there.

Not everyone understands the challenges that children face with sensory processing issues that often accompany autism. Author Jen Malia, a woman who lives with autism and sensory issues does. It’s fantastic that Too Sticky! is available to help open people’s eyes and to encourage empathy for kids coping with sensory stimuli that can be overwhelming, and even immobilizing at times. You may also not be aware that it’s not as easy to recognize in girls.

We meet the main character, Holly, at breakfast time at home. Lew-Vriethoff’s expressive and upbeat illustrations offer an excellent example of how kids like Holly react negatively to something that to other kids may seem like nothing—getting sticky pancake syrup on her hands. From both the art and prose, readers know immediately what makes this young girl uncomfortable. Holly is also reminded that “her science class would be making slime today” which gets her worrying.

What’s also terrific in this same scene is how Holly’s older sister, Noelle, is understanding and apologizes after her fork falls on the floor making a loud and sudden noise. Here Malia adds that Holly replies, “It’s okay,” because that social skill was taught to her by her father. Family support, guidance and modeling acceptable behavior are crucial for children on the spectrum.

At school, Holly’s mother explains to her second grade teacher, Miss Joy, that during slime play, Holly would like to have soap and water at her desk because “She doesn’t like sticky hands.” I remember having to discuss these same types of things with my son’s teachers since my son wasn’t old enough to self-advocate.

Throughout the school day, Holly dreads the approaching slime time. In fact she’s unable to focus on much else. She begins the science experiment reluctantly with the less difficult portion sensory-wise. Miss Joy then finds a clever way to get the overly cautious student to feel curious and involved. Her encouragement and compassion are evident in her dialogue and her poses. What could have been an upsetting experience turns out to be a positive one. It helps, too, that Holly’s not teased by her classmates and that her accommodations have been taken into consideration.

Since the main character experiences “the world differently” than her neurotypical classmates, readers see that it’s hard for Holly to navigate the many uncomfortable situations she faces at school. Her sensory issues and autism color a lot of her reactions and moods which is quite common. While the premise of Too Sticky! may appear straightforward and easily resolved, for children like Holly, such is not the case in real life.

Malia adds a candid Author’s Note describing how both she and her daughter live with Autism Spectrum Disorder and her goal in writing the picture book. With one out of every fifty-nine children in the U.S. diagnosed with ASD, it’s important more children, parents, teachers and caregivers learn about how these children experience the world. With Holly, readers on the spectrum can see a mirror on themselves. Too Sticky! is the ideal read not only for parents and children with these sensory issues, but for anyone wanting to understand the experience and struggles kids like Holly deal with on a daily basis. The backmatter also includes an easy slime recipe perfect for indoor science activities and silliness.

Why is Milk White? & 200 Other Curious Chemistry Questions ($14.95, Chicago Review Press, Ages 9 and up) is quite a sophisticated science book for kids, educating readers about the basic chemistry of products we use every day as well as the chemistry of people, animals and plants. The questions were written by 11-year-old Alexa Coelho, and the answers were written by her neighbor, a chemist and author, Simon Quellen Field.

The first question that caught my eye in Why is Milk White was “Why does Benedryl make you tired?” Being a major allergy-sufferer myself and frequently relying on Benedryl to get me through countless nights during hay fever season, I was fascinated to read about how this drug actually works and why it makes me so darn sleepy.

Ten chapters cover the topics of: 1)People and Animals; 2)Plants; 3)Household Chemistry; 4)Health and Safety; 5)Things That Catch Fire or Go Bang; 6)Things that Stink; 7) Color; 8) Chemistry in the World; 9) Chemists; and 10)Food. Under each topic is a list of fascinating questions. There is no index in the back of the book so readers must thumb through sections if they are searching for specific information.

Woven throughout the chapters are some really cool chemistry projects budding scientists can do at home, such as making oxygen and hollowing out pennies. Some of these experiments require adult supervision.

What I like about the book is that it was a collaboration between a curious child and a chemist, so it answers many questions that kids (and adults) all over the world ask. It is very well written meaning that children can understand the answers easily, without the author talking down to them.  Also, as I’ve said many times before, there is a serious shortage of scientists in our country, so we cannot have too many great science books for young readers. I can seriously see how this book could inspire a young reader to get interested in a career as a chemist.

As far as the answer to the question, “Why is milk white?” check out page 131 of the book yourself. If you’re as curious as I was to find out the answer to this question, let me give you a hint; it has something to do with light.