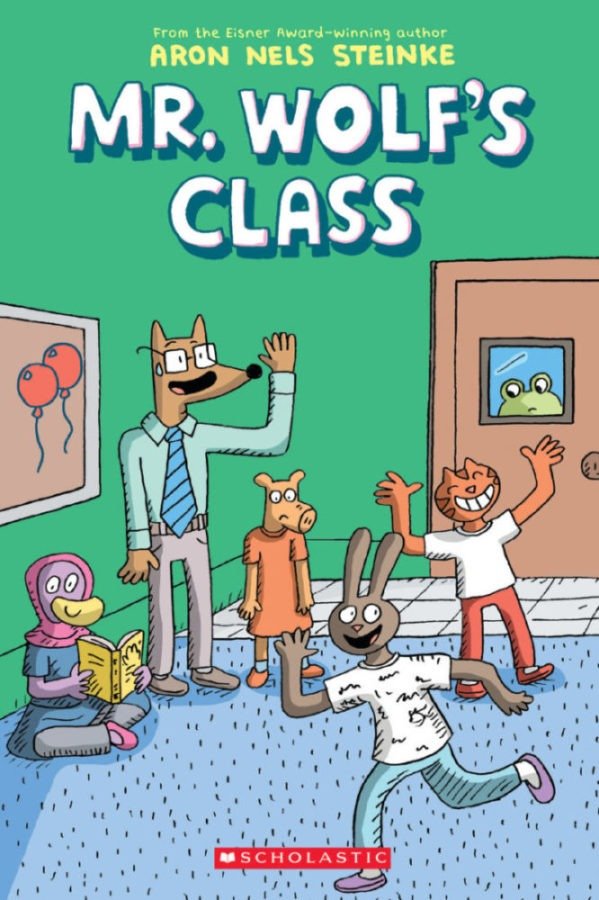 Mr. Wolf’s Class: Book #1 The First Day of School  by Aron Nels Steinke is not your mother’s back-to-school middle grade chapter book. It’s a smart, funny, insightful look at fourth-grade in graphic novel format and I enjoyed every page. From the realistic, contemporary dialogue to the perfectly captured facial expressions on the diverse line up of teachers and students, Steinke succeeds in helping readers connect with and care about an assorted and appealing cast of characters. And that’s a good thing since this is Book #1 in a new series that is sure to captivate even the most reluctant kid.

In this first book, we’re introduced to Mr. Wolf, a new teacher at Hazelwood Elementary. In fact, even before Chapter One (there are eleven chapters in total), anthropomorphic artwork full of color and movement shows Mr. Wolf conscientiously preparing his classroom followed by frames of each student, with illustration clues, as a quick and clever way to hint at their personality or issue. There’s new-in-town student, Margot, eager to start school but nervous about making friends; there’s Penny, poor, wiped out Penny, whose constantly crying baby sibling is keeping her from getting a good night’s sleep; there’s Aziza, a dedicated student but slightly snarky; and there’s Sampson, who’s brought something special to school to share at show-and-tell.

As an elementary school teacher and parent, Steinke totally gets this age group and the ever-changing dynamic of the classroom. One minute there’s silent reading and the next there’s chaos. All types of conflicts caused by all kinds of kids can occur throughout the day and Steinke’s chosen a few good ones to portray in Mr. Wolf’s Class. He’s included geeks and smart alecks, thoughtful and mean kids. He’s also got bossy and meek ones, tattle tales and show offs. With that kind of composition, anything can and does happen under Mr. Wolf’s supervision including a missing student, show-and-tell, and a burgeoning friendship.

I’d like to emphasize here that this book can be appreciated year round for its wit, its engaging illustrations and the delightful depiction of fourth-grade from multiple perspectives. Join Mr. Wolf and his students to see first-hand what’s happening at Hazelwood Elementary.

THE FANTASTIC LIBRARY RESCUE
AND OTHER MAJOR PLOT TWISTS
Written by Deborah Lytton
Illustrated by Jeanine Murch
(Sourcebooks Jabberwocky; $7.99, Ages 8 and up) 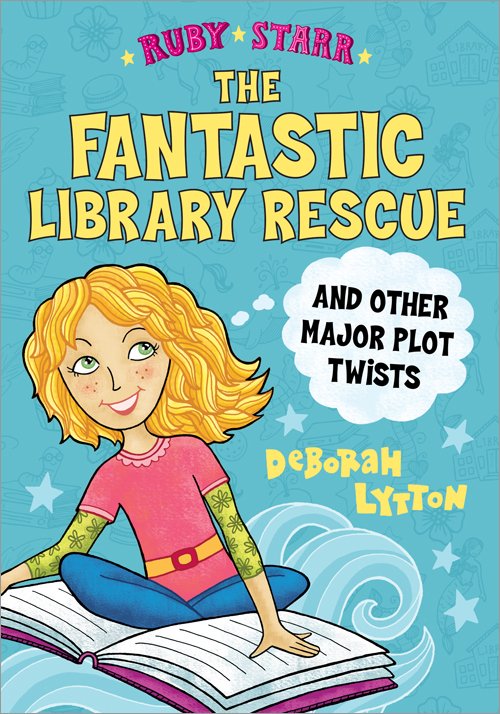 Read Our Q & A With Author Deborah Lytton

On today’s post I’m excited to share a recent interview I had with author, Deborah Lytton, about book #2 in the Ruby Starr series, The Fantastic Library Rescue and Other Major Plot Twists, which came out earlier this month. Having thoroughly enjoyed this chapter book for middle grade readers* that includes illustrations of Ruby’s active imagination at work, I can see how much tweens and bibliophiles will gravitate to the series, and this new book in particular, especially since it tackles two important issues: libraries losing funding and friendship predicaments. I especially like that Ruby’s friend Will P is also in a bookclub, something I don’t usually see depicted in stories. Here’s how Sourcebooks Jabberwocky describes Lytton’s latest:

The second book in this fun series that’s perfect for younger fans of the Dork Diaries and Story Thieves series. Ruby Starr is an older Junie B. Jones with a big imagination and a love of reading.

Ruby Starr’s life is totally back on track. Her lunchtime book club, the Unicorns, is better than ever. And she and Charlotte, her once arch enemy, are now good friends. The only thing that’s really causing any drama is her upcoming poetry assignment. She’s a reader, not a poet!

But disaster strikes when Ruby learns that her most favorite place in the world, the school library, is in trouble. Ruby knows she and the Unicorns have to do something to help. But when Ruby’s plans end up hurting a friend, she’s not sure her story will have a happy ending after all.

GOOD READS WITH RONNA: Ruby is a charming, book-loving outgoing yet introspective fifth grader. And while she is not perfect she certainly is someone any parent would be proud of. Do you happen to know any Rubys? And if not, how did you wind up with her as a main character for your series?

DEBORAH LYTTON: I do know a Ruby. My inspiration for this series came from my younger daughter who was in fifth grade when I began writing the first book. My YA SILENCE had just been released, and my older daughter was reading it. My younger daughter wanted me to write something for her to read. She asked for a story that would make her laugh. I based the character of Ruby on her initially, but then as I began to write, the character took on her own qualities. My favorite part of writing is when the characters begin to shape themselves. That definitely happened with Ruby Starr.

GRWR: What do you love most about her?

DL: I love that Ruby makes a lot of mistakes, but always tries to fix them. My favorite thing about Ruby is her kindness. She thinks about other people and their feelings and tries to help them when she can. This is a quality I truly admire. I also enjoy writing Ruby because she is so imaginative.

GRWR: I realize this is book #2 in the series but yet I felt fully up-to-speed. Can you please tell readers briefly what happens in book #1?

DL: I am so happy to hear that you felt up-to-speed! It was really important to me to write a second book that would let readers jump right in. Book #1 establishes Ruby’s character and her love for reading. The story centers on friendship troubles. When a new girl joins Ruby’s fifth grade class, she begins pulling Ruby’s friends away from her. Then she threatens to destroy Ruby’s book club. Ruby has a difficult time, and then she learns something about the new girl that changes everything. Ultimately, books bring the friends together.

GRWR: Is there a book #3 on the horizon?

DL: Yes, I am really excited about Ruby’s third adventure. I have just finished the manuscript and I can tell you that Ruby and her friends get into a little bit of a mix-up and that it all begins with a very special book.

GRWR: As a kidlit reviewer I love that Ruby is in a book club (The Unicorns), and as a writer I love Ruby’s vivid imagination. Did your own childhood inform these traits or did you feel she’d need these qualities to be a role model for tweens or someone many young readers could relate to?

DL: Growing up, my sister and I were like Ruby. We loved reading. Both of us cherish books and have saved many of our favorites from when we were young readers. My own daughters also love to read. In spending time helping out in their school classrooms and libraries, I have seen how many students enjoy books. I loved the idea that a fifth grade student would be independent enough to start her own book club at school to celebrate reading. Then I thought it would be fun to see where her imagination would take her, especially since she would be inspired by all the books she had read and loved. I hope young readers who have stayed up late just to read the next chapter of a book will connect with a character who is like them.

GRWR: The hero’s journey that Ruby embarks on is to save the school library where the hours have been reduced and new book purchases have been shelved due to funding cutbacks. Was this plot line inspired by stories you’ve seen in the news or even closer to home here in L.A.?

DL: I have volunteered in the libraries at my daughters’ schools so I have seen first-hand the way that budget cuts have impacted the libraries. I have also helped students search for the perfect book to read and then watched their faces light up when they discover something really special. Libraries are so valuable to our youth. I wanted to highlight that message in this story.