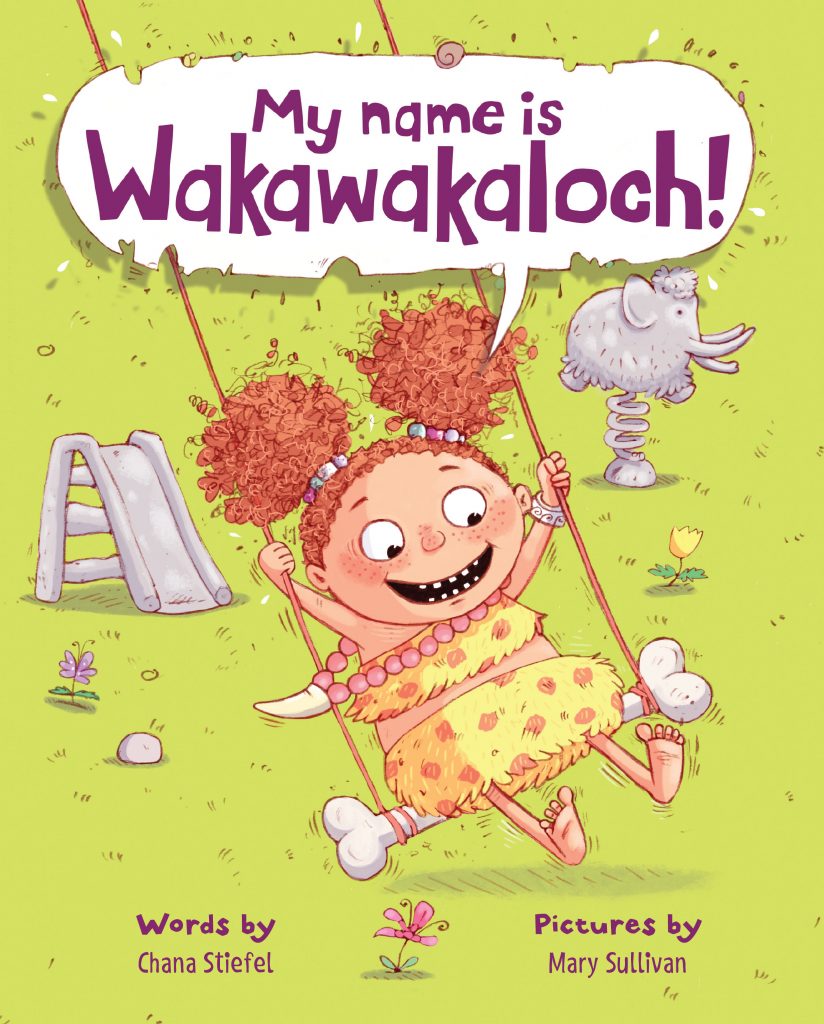 With My Name is Wakawakaloch!, Chana Stiefel has written a story that will resonate with so many children as it has with yours truly, someone with a name that people rarely pronounce correctly. I’ve been called Ronnie, Rhoda, Rona and Rhonda (always sung back with the Beach Boys’ “Help Me” for effect), and Ronald. It means so much to me when people actually hear my name and repeat it correctly. So when I received my review copy of Stiefel’s new picture book I was eager to read what the main character, plucky, pig-tailed Wakawakaloch, had to deal with. And when I did, it cracked me up.

Even readers who have an easy name to pronounce should get their hands on a copy of My Name is Wakawakaloch! because it’s a great way to step into someone else’s shoes (although everyone’s barefoot in this picture book!) to understand the frustration that this adorable main character feels. Set in the Stone Age featuring funny “Flintstones”-like artistic touches from illustrator Mary Sullivan, this charming picture book also invites read-aloud opportunities, especially when it comes to saying the hysterical names that Stiefel’s made up.

When classmate Boog in Sabertooth Safety Class hollers “Look out, Wammabammaslamma!” Wakawakaloch shouts back, as she constantly has to, “That NOT my name!” I relate to the young Neanderthal’s rage, remembering all the different things kids called me in school. Also worth noting – these are cave kids conversing so the grammar or lack thereof really adds to the read-aloud experience. Sullivan’s illustrations of the characters wonderfully and whimsically portray a full range of emotions and actions at play throughout the story (and don’t miss her endpapers, too).

When the exasperated Wakawakaloch expresses to her parents how much she wishes she had a different name, one that could be found on a T-shirt, they don’t even get what a T-shirt is which I totally love. So will young readers. Stiefel doesn’t mention key chains, but that’s another unusual name story!

Wakawakaloch’s folks send her to the local Elder called Mooch who has a sharp sense of humor despite stinking “like rotting mammoth poop.” She tells him her troubles and he in turn tells her she needs to be a backwards seer in addition to a forward thinker. She leaves Elder Mooch more annoyed than satisfied but as she tosses and turns in bed that night, a vision on her cave’s walls sheds light on what the Elder was talking about. Her ancestor and namesake was brave and heroic and now it’s time for Wakawakaloch to follow in her footsteps. What her newfound wisdom leads to will be a spoiler if I spell it out, but suffice it to say it fits this entertaining story to a T! Kids will laugh along with Wakawakaloch, not at her, while also appreciating that while a simple name may be nice, sometimes something special can be found in one that’s a bit more complicated and uncommon, or maybe I should say both on the (cave) wall as well as off the wall?

Click here for a review of another book illustrated by Mary Sullivan on this blog.