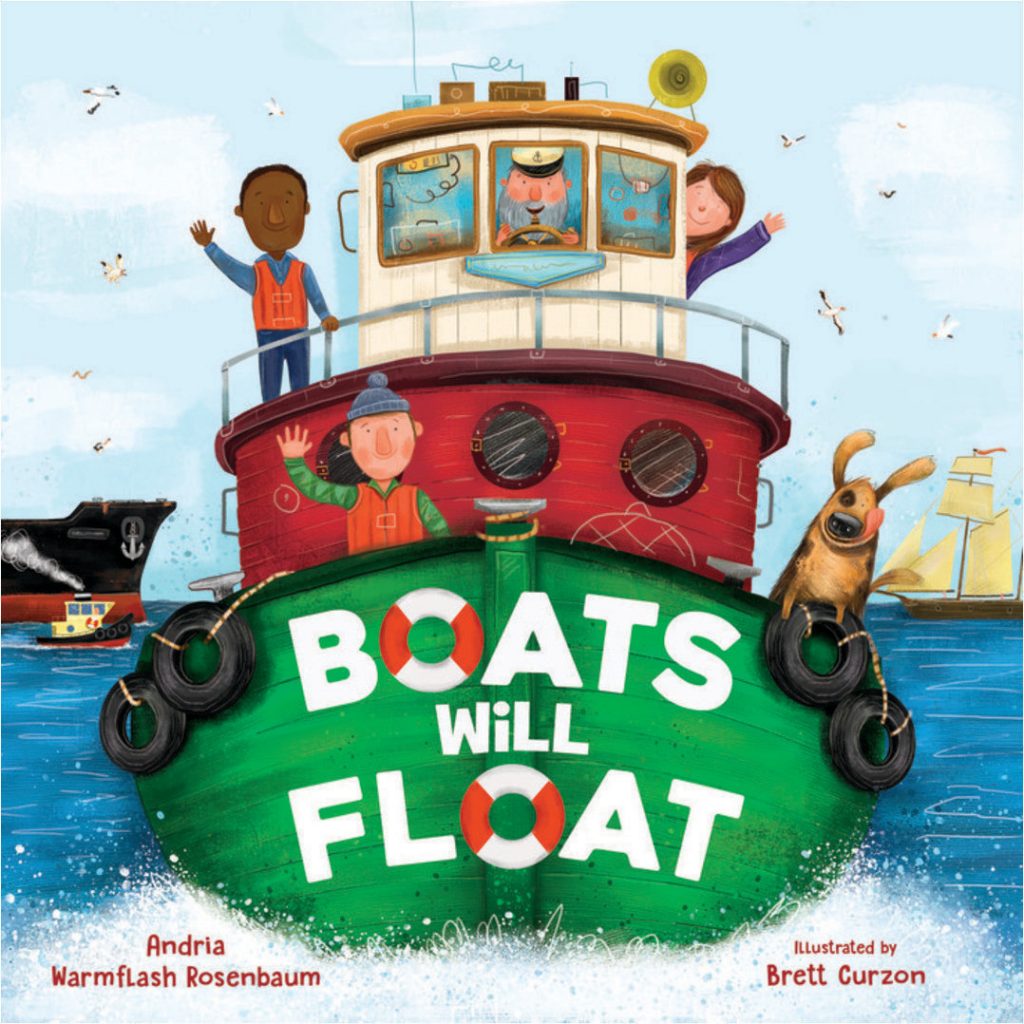 After a third and fourth reading of Boats Will Float by Andria Warmflash Rosenbaum with illustrations by Brett Curzon, I still found myself smiling as if I were reading it for the first time. There is so much to enjoy in this picture book highlighting a bevy of brightly colored boats both big and small.

Rosenbaum’s descriptive rhyme invites reading aloud and the full page spreads beg to be explored in order to find humorous details that Curzon’s included (hint: check out the front of the cruise ship). Readers learn about a variety of vessels that travel on bays, rivers, and oceans as they’re presented at work and play from early morning until night.

The timeless appeal of watercraft for kids cannot be denied and Boats Will Float celebrates that by introducing over a dozen kinds. There are fishing boats, motor boats, tug boats, submarines, freighters, sailboats and canoes. There’s even a welcoming houseboat that bookends the story. First, a child and her dad greet the new day, watching the boat activity from their deck, “Boats are bobbing in the bay/Waiting to be on their way.” Then at the end, the entire family settles down for the night, “Safely moored in dreams all night-/Boats will float … toward morning light.”

I love how there are even nautical flags cleverly incorporated into the book. At story time youngsters can spell out their own name using the alphabet provided. Be on the lookout for a special treat in the mast art of the sailboat spread to point out to curious children. I won’t say anymore than that.

The structure of this picture book, with its vibrant scenes moving to more tranquil ones, makes it ideal for a bedtime read. The art, beautifully complementing the prose, shifts from bolder colors to calmer ones as nighttime approaches. A glossary in the back matter with pictures pulled from the pages that children will recognize provides additional info for your things-that-float fans. What a fun way to have them drift off to sleep! 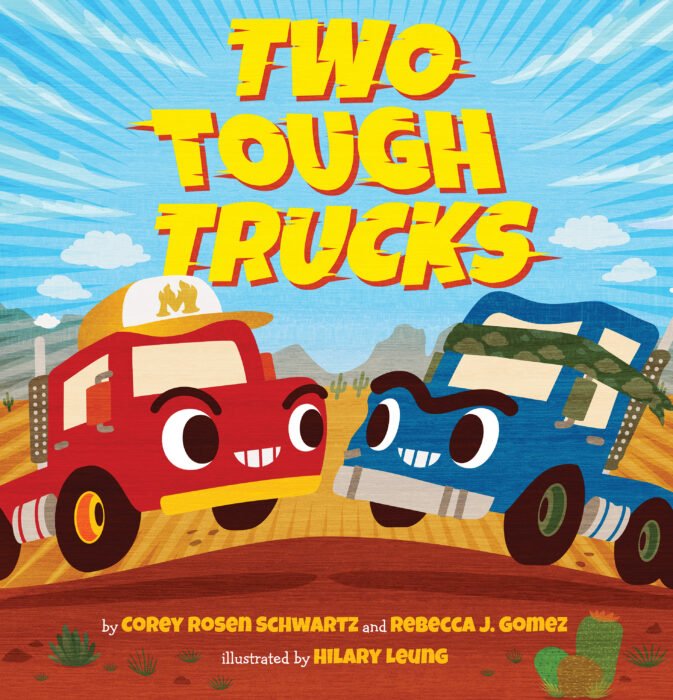 In Two Tough Trucks by Corey Rosen Schwartz and Rebecca J. Gomez with art by Hilary Leung, Mack and Rig, two vehicles with very different personalities, are heading off for their first day of Truck School. Red Mack is confident and bold. Blue Rig is reluctant and nervous. This sentence describes them to a T: “Two trucks off to school for their first day of class. One riding the brakes. One hitting the gas.”

When the aptly named teacher, Miss Rhodes, pairs the two trucks for a circuit on the track, Mack takes off and doesn’t look back. Rig on the other hand finds the course daunting, facing what seems like one insurmountable challenge after the other. The next drill takes the class to a hill, one which Mack knows he can easily climb. Rig doesn’t feel so sure and comes in “dead last.” The two trucks don’t really connect, each one thinking little of the other. “My partner’s a drag,” is Mack’s take. “That hotshot,” said Rig, “He sure loves to brag.” What will your children think of the characters? It’s a great opportunity to seek their input. The repetition of VROOM! ZOOM! throughout invites sound effects and participation by the littlest readers

It’s not looking hopeful for these two six-wheelers. If there’s a way forward towards friendship, it’s eluding them. But then there’s light on the horizon for Rig when the class is tasked with learning how to go backward while hauling cargo. That’s when Rig excels at last! Hold on! Was that a look of doubt creeping onto blundering Mack’s face? Exasperated, the big, red truck is ready to give up. VROOM! DOOM?

With this shift in ability, Rig’s gained confidence but not a big head. He kindly helps his partner tackle the task until Mack masters it, too. Schwartz and Gomez get youngsters engaged with the colorful characters and the pace of this story. Kids’ll cheer as the vehicles bond after accomplishing what they needed to as a team. It’s wonderful to see how working together with positive attitudes yields mutual success.

Leung’s lively illustrations emphasize the individual vehicles. Rig wears a camouflage design bandana and Mack, a baseball cap to match his trim. I like the movement the illustrations convey and how the southwestern style art palate bleeds off the page. Of note and adorable is how, in the end, after a friendship has developed, the two pals have exchanged head ware. Have your kids also keep an eye out for the cute turtle and roadrunner who appear in multiple spreads.

Two Tough Trucks is clearly more than a first day of school picture book. It’s a super rhyming story about learning to  get along, having each other’s back and being a good sport. The title works too. Each vehicle has its strengths and weaknesses, true. It’s not letting those areas that need improvement immobilize them that makes them tough, especially together as a team. Rev up your engines and make tracks to your nearest bookstore for a copy of Two Tough Trucks today!

Scarry’s Books Are Back & Good Reads With Ronna’s Got ‘Em!

The most well-known Richard Scarry’s books including Cars and Trucks and Things That Go (Golden Books, $15.99, ages 3-7), now classics, were first published when I was a teenager. And while I may have missed growing up with his books, my kids fortunately did not. Now I can look forward to the day when I’ll share Richard Scarry’s books with my grandchildren because there’s a timeless quality to the humor in his stories that will entertain generations to come. It’s true some of Scarry’s books have been updated and made more politically correct, but for the most part, characters like Lowly Worm, Huckle Cat, Bunny Rabbit and the Pig Family along with all their antics will help Scarry’s popularity endure.

Did you know that Scarry’s first books were published by Golden Books back in the  ’40s and by the time he died in 1994 he had sold over 100 million copies of his books worldwide in more than 20 languages? No wonder some of his most beloved books are in the Busytown series – he must have been very busy himself writing and illustrating over 150 books! Scarry was even posthumously awarded a Lifetime Achievement Award from The Society of Illustrators in 2012. Now that speaks volumes.

Cars and Trucks and Things That Go is an ideal intro for children fascinated with anything and everything vehicularly related. There are tractors and tow trucks, vans and buses, trucks and cars, cherry pickers and cement mixers, as well as trains, planes and dune buggies. In other words, if it moves it’s in there.  And your kids will want to study every single page not once, but over and over again because Scarry’s packed so much into every illustration.  And if that’s not enough, there’s also tons of activity going on, from log-loading trucks lifting to ditch-diggers digging. Why not build up the suspense for your children and have them watch out, perhaps even try to predict things, because with a Richard Scarry, book you never know what’s going to happen next.

In a nutshell, “The Pigs are going to the beach to have their picnic.” Will they make it there in their broken-down truck while dodging all sorts of wild and crazy obstacles along the way? Then Dingo Dog, who has “knocked down all the parking meters” with his awful driving, will be pursued by Officer Flossy (a fox) who wants to give that rascal a ticket. And don’t forget to remind kids to search for Goldbug, a tiny creature who can be found somewhere in every spread. This is truly transportation at its best!

I don’t know who was more excited to see this 40th Anniversary review copy show up at our house, me or the kids? All I know is my murder mystery will remain on the night table tonight while I get nostalgic and swap my cloak and dagger for some crane and digger!