THREE SIDES OF A HEART:
STORIES ABOUT LOVE TRIANGLES
Edited by Natalie C. Parker
(Harper Teen; $17.99, Ages 14 and up) 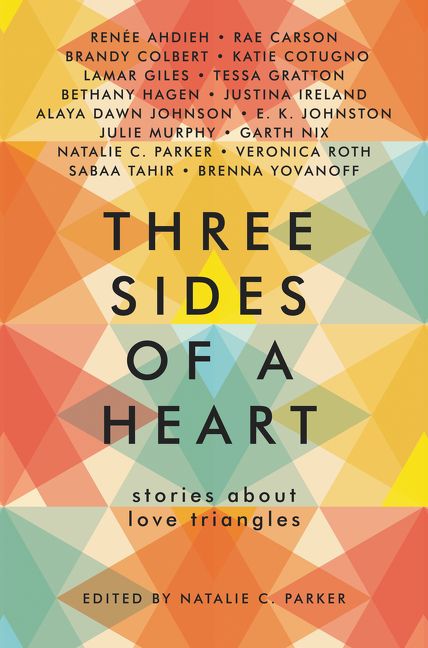 Christine Van Zandt recommends Three Sides of a Heart, a short story anthology featuring sixteen authors and an introduction by Natalie C. Parker who is also the editor.

This YA short story anthology, Three Sides of a Heart, gives us glimpses into love triangles from historical zombie featuring the Southern belle, her handsome betrothed, and her fierce female Negro Attendant (“Dread South” by Ireland) to futuristic (“Omega Ship” by Carson—with a let’s-talk-about-it ending) to a modern-day girl-on-girl kissing romance (“Lessons for Beginners” by Murphy). The common thread in this collection is its unique perspective of this theme referred to in the introduction as “reimaginings.” Settings as near as your backyard to far-off inhabitable planets will delight readers.

If the proverb “variety is the spice of life” is true, then Three Sides of a Heart is zesty indeed—and quite steamy in places. Of course, there are girls torn between good boys and bad boys (“Hurdles” by Colbert and “Waiting” by Tahir), and, more unexpected, the undead falling in love with the dying (“Unus, Duo, Tres” by Hagen). In “Vega” (Yovanoff), the city is a character. “Triangle Solo” (Nix), set on Mars, uses the boy/boy/girl triangle and a triangle, the instrument.

Pointe by Brandy Colbert is reviewed by Mary Malhotra

“Colbert builds characters whose flaws, struggles, and bad decisions make them real and indelibly memorable . . and it’s this complexity and empathy that set this gripping story apart.”—Publishers Weekly, starred review

“Colbert has put out a stunningly poignant novel . . . Readers who discover this book will be unable to put it down.”—VOYA

The narrator in Brandy Colbert’s debut YA novel Pointe (G.P. Putnam’s Sons, 2014, $17.99, YA) could be a stereotypical prima-ballerina-in-training. Theo’s got the drive, the demanding instructor, the long, strong legs, the beat-up toe shoes. As you might expect, she commiserates with dancer frenemies, and escapes with school friends who have no idea what she goes through at the studio. She struggles with an eating disorder, too. But Theo is not a stereotype, and she has a lot more going on in her life than just dance.

The eating disorder, for example. It seems to be a response not to the demands of ballet but to two losses Theo suffered as a thirteen year old: her much-older first boyfriend unceremoniously dumped her, taking off without a trace; and her best friend Donovan was kidnapped. Pointe opens on the day four years later when Donovan is rescued from his kidnapper and returned home. Theo is upset that Donovan won’t see or talk to her. She’s also confused by news footage that appears to show he was happy living with his captor. She needs to understand why Donovan didn’t try to escape, especially once she realizes she knows the kidnapper — and will have to testify against him.

There is much to recommend in this book. Theo’s voice is real and raw, and she and her friends Phil and Sara-Kate make compelling, memorable characters. Their chemistry, like Theo’s warm relationship with her supportive parents, provides an island of hope in a choppy sea. The book’s natural presentation of diversity works well. Realistically, as the first-person narrator, Theo doesn’t announce that she’s African-American. Race doesn’t even come up until part way through the second chapter, when she recalls how she and Donovan bonded after a teacher mishandled a classroom discussion about slavery.

Parents sharing Pointe with teens may want to be ready to discuss some aspects of the book. Pot smoking is an accepted, routine activity for Theo and her friends. In fact, her love interest doesn’t just smoke; he also sells drugs to his classmates. He already has a girlfriend, too — but will that matter to Theo? There are sex scenes and references, and much of the sex is abusive, though Theo doesn’t realize it. Perhaps because of this, the scenes are not so explicit that the details got burned into my psyche. A last point to consider is best explained by including a spoiler, although you can skip the spoiler and walk away with this bottom line: if you start the book, be sure to finish it!

SPOILER: In case you want additional guidance before choosing this book, I’ll close out the review with the spoiler version of my “finish what you start” recommendation. Early on, Theo realizes that Donovan’s kidnapper and her first boyfriend are the same guy, Chris Fenner. This means he was actually twenty-six when she was thirteen, but Theo still thinks of him as her ex-boyfriend. She sees herself as an unlovable reject rather than seeing Chris as a pedophile. Eventually, she comes to the understanding that she and Donovan are both victims, that part of Chris’s crime was that he warped her view of sex and love. However, it takes her most of the book to get there; a reader without patience might give up while right and wrong are still upside down. Reading this book to the last page is not hard, but it is important.