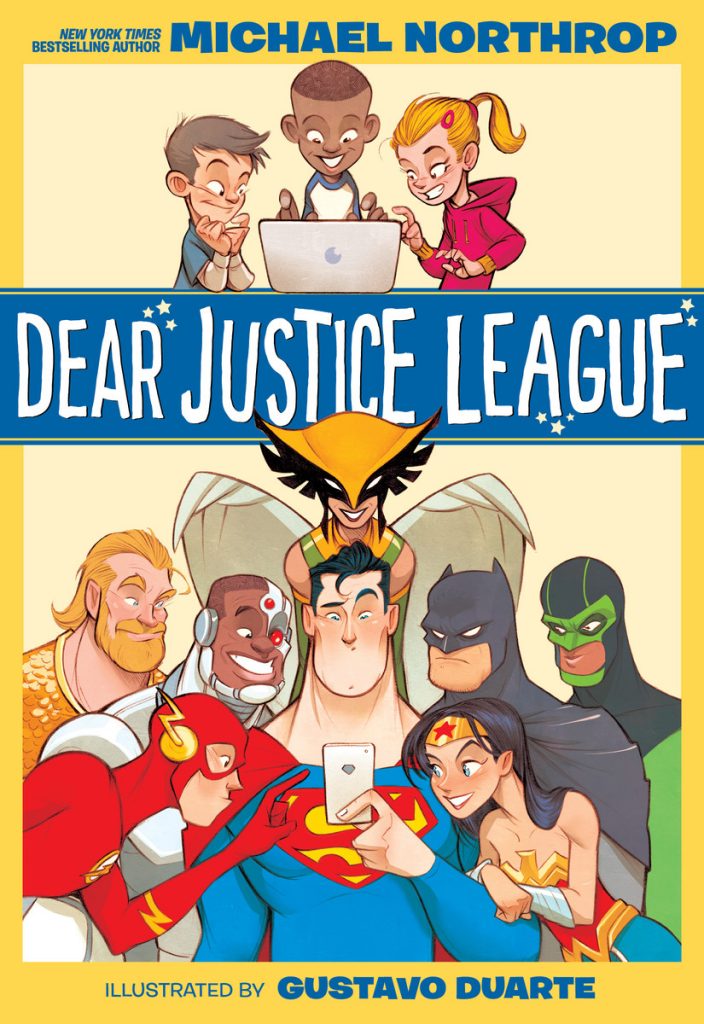 Good Reads With Ronna is delighted to be part of the Dear Justice League blog tour celebrating this week’s launch of a rollicking good read and recommended middle grade graphic novel from DC Zoom.

The premise is a simple yet oh so satisfying one. Fictitious kids from all over America pen Dear Abby-type letters to their fave superheroes and then lo and behold, they get replies. Not what you were expecting, right?

Middle grade readers, reluctant and struggling readers as well as fans of graphic novels will enjoy every single page of Northrop’s and Duarte’s fast and uproarious read. It’s playful and action-packed, and who doesn’t love a story where there’s never a dull moment? Northrup delivers dynamic dialogue that pairs perfectly with Duarte’s art.  His hilarious illustrations, full of every facial expression possible, jump off the page and pull you in. They deserve to be looked at multiple times.

I got into the novel quickly, intrigued by the first question posed to none other than my childhood hero, Superman. Wondering if the Man of Steel had ever messed up, the letter writer is shown having botched up his attempt at an invention. And while you’d think heroes are especially busy saving the day in multiple ways with no time for correspondence, Clark Kent’s alter ego surprises young Ben Silsby with an answer. Texting, flying and superhero-ing however do not safely go together leading to a hilarious string of close calls demonstrating that it’s not just Kryptonite that can bring him down.

I especially loved having the chance to meet seven other members of the Justice League, each presented in their own chapter addressing a particular issue raised via email, text or snail mail. Hawkgirl, Aquaman, Wonder Woman, Flash, Green Lantern, Cyborg, and Batman all make appearances and make you want to spend more time with them. The Dear Justice League questions range from silly (does Hawkgirl eat small mammals, does Aquaman smell like fish) to those that will resonate with the targeted age group about bullying, moving to a new school, being perfect, fitting in, friendship and teamwork.

Another aspect of the book that worked well was the thread running through the entire story about an invasion of evil, insect-like Shock Troopers from the planet Molt-On. Here’s where I was first introduced to Hawkgirl and was impressed by her sense of humor though a bit wary of how much soda she seemed to consume. But most of all, I enjoyed seeing the superheros hang out at HQ, chatting together while revealing snippets of their characters. When they ultimately fought off the Shock Troops through a well coordinated team effort, I felt happy and eager to read more about each of them individually and as a league. Next up for me is definitely Superman of Smallville, available 9/3/19.

The start of a new school year is an ideal time to share this graphic novel showing sometimes serious, yet often tongue-in-cheek adventures that demonstrate how even superheroes have the same vulnerabilities kids have. They may fight foes but are far from perfect. So head to your local independent bookseller to buy a copy of Dear Justice League for your kids because these graphic novels are bound to win new DC superhero fans and delight old ones.

Huzzah and hooray! A world class detective and a passionate doodler are back in the continuing series of two popular Candlewick Press middle grade books.

If you’re not familiar with either either Timmy Failure or Tom Gates, please take a look at earlier reviews of previous titles right here at Good Reads with Ronna (see below). Both series are a hit with fans of Jeff Kinney’s Diary of a Wimpy Kid and employ a diary or journal style novel filled with pen and ink illustrations. The illustrations not only add to both series’ humor, but, as one of my students, a reluctant reader (and now big fan) told me: the illustrations increase his understanding and enjoyment. Both are recommended for ages 8-12.
So check out more hilarious adventures– and misadventures– of Timmy Failure and Tom Gates.

Timmy Failure: Sanitized for Your Protection (#4) 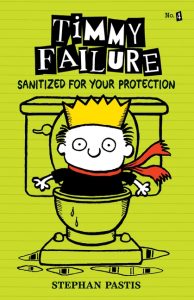 The young “ … founder, president, and CEO of Failure, Inc, the greatest detective agency in the nation …” is forced to go on a road trip to Chicago to help his mom’s boyfriend move, instead of working on his latest case: the theft of money from a school fundraiser. Extremely put out, Timmy endures miles of cornfields and country-western music with his mother, Doorman Bob, his polar bear ex-partner, Total, arch-enemy and “criminal mastermind,” Molly, and her family. Like the Pink Panther’s clueless Inspector Clouseau, the equally clueless Timmy accuses everyone but the actual thief and tries to elicit confessions from the innocent while advising them on their “Carmen Miranda” rights. Can Timmy solve the case while far away in Chicago? Can he trust Molly, one of his many suspects, to help him find the crook? Be prepared for “greatness!” Visit Candlewick Press for information on the books and see Pastis’ wonderful Timmy Failure website for more information on the series, the characters, trailers for each book, and activities.

Read Good Reads with Ronna’s past reviews of the Timmy Failure series here. 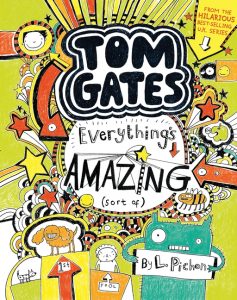 Tom has a lot on his mind and some big problems. Not his usual problems: an irritating older sister, an obnoxious classmate who is always trying to get him in trouble, school, teachers, and math homework. Actually, any homework.

No, he’s got much bigger worries than that. His birthday is coming up and no one seems to notice the wish list he’s conveniently posted on the refrigerator door. His weird, but sweet grandmother has promised to whip him up a special birthday cake. Not so good … she’s been known to mix jello and peas together. His parents have promised to take him and four of his friends to Dino Village for his birthday (where his father works). Four friends? No problem, he’ll invite best “mate” Derek, Norman, and two others. Things quickly go awry, when Amy, the girl he has a crush on, sees the invitations and asks if she can come … and bring a friend. He agrees before realizing the numbers (there’s that pesky math again) don’t add up to four.

His band, Dog Zombies, which includes Derek and Norman, has been “volunteered” by Principal Keen to perform at the school dance. The inexperienced trio, with only one previous engagement under their belts, is going to need a lot of practice. A lot! Even worse, Tom’s father, a loveable and delightfully quirky man, has been hired to be the DJ at the school dance. He plans to wear his dinosaur costume from Dino Village … and silver disco boots. Positively cringe-worthy.

Will this doodler and homework dodger get what he wants for his birthday? Will he figure out how to include Amy and his four friends at Dino Village? Will the Dog Zombies go up in flames at the school dance? And then there’s his father … and his grandmother’s special birthday cake. Read the book and be prepared for a laugh-out-loud experience!

Oh, in case you don’t speak British (“choon” means an excellent tune), Pichon has included a British to American glossary. Don’t forget to check out the recipe for Tom’s “Doodle Toast” at the end of the story.

Visit Pichon’s and Candlewick’s websites for more information on the author and the series as well as fun activities.

Check out Good Reads with Ronna’s earlier reviews of previous titles in the Tom Gates series:

The Brilliant World of Tom Gates (#1)