A GREEN PLACE TO BE:
The Creation of Central Park
Written and illustrated by Ashley Benham Yazdani
(Candlewick Press; $17.99, Ages 7-10) 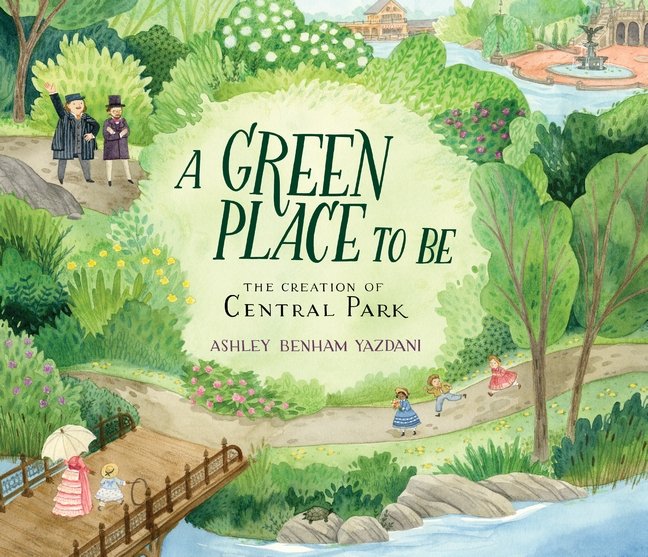 Ashley Benham Yazdani’s A Green Place to Be: The Creation of Central Park shines a light on a familiar subject in a new way. This historical nonfiction picture book gives a glimpse into 1858 New York City when the park’s design contest was held. Architect Calvert Vaux and park superintendent Frederick Law Olmsted teamed up to win.

Yazdani’s images capture the vast undertaking as Vaux and Olmsted draft the layout, called Greensward. I like the spread of the ten-foot-long drawing envisioning what could be done with the land. Though their design was entered after the deadline, they won but had to change the name to New York City’s Central Park.

Olmsted planned ahead—about 100 years ahead—using “the color and shape of each plant to create illusions in the landscape” so nature would be the focus for generations yet to come. “Amenities such as the Dairy were specifically built to help those living with less, and Olmsted’s and Vaux’s compassion for others is shown by their determination to create a park that welcomed all social classes.” The men were early environmentalists striving to conserve this patch of parkland in Manhattan.

Kids who like construction-type books will appreciate that boulders were blasted to bits. Nearly every piece of the swampy, sharp, and foul-smelling land was raised or lowered, rocks were relocated and reused. Thought was given on how to best move people through the park without disturbances from carriages.

The end matter sums up the lives of Olmsted and Vaux. A page of interactive questions with items kids can search for within the book adds an element of interactive fun. More detail is given on Seneca Village, the area of land which had to be cleared for the park. The freed African-Americans who lived there were first offered money, then forced out—a sad beginning to this story.