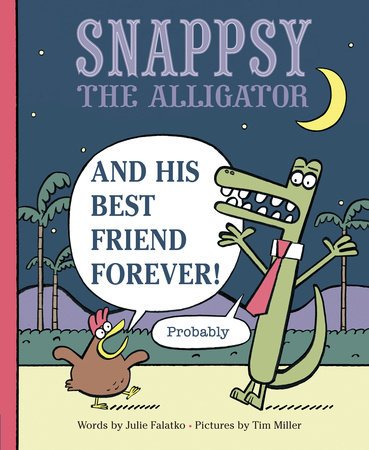 Rarely, is a sequel to a fantastic picture book better than the first.

Don’t get all excited. Alright, it’s not necessarily BETTER, but by golly it sure is just as incredible as the first and every page enjoyable to the fullest.

Snappsy the Alligator and His Best Friend Forever (Probably) written by Julie Falatko and illustrated by Tim Miller is a picture book all kids can appreciate in terms of friendship woes. From as early as they can talk with friends, children are ready to define their friendships into categories––quickly going from “You’re my best friend!” to “You’re not invited to my party!” within the course of a day or even hours.

At one point Bert exclaims, “Let’s play pinochle! Wear pizza hats! Braid my hair!” to an exasperated Snappsy who just wants time to himself and has no clue what pinochle is or how in the world to braid a chicken’s hair. As Snappsy spends time alone he realizes how much fun it is to be with his friend Bert, and invites him in to play.

Don’t miss the chance to share Snappsy The Alligator and His Best Friend Forever (Probably), a new and entertaining read by the same team behind Snappsy the Alligator (Did Not Ask to be in This Book). My preschool kids request this book multiple times daily and I never tire of reading it aloud and hearing their giggles of sheer delight.

Cecil Castellucci, an L.A. author, has written everything from picture books to young adult novels. Her latest projects are Odd Duck and Letters for Kids, a bi-monthly subscription program through The Rumpus. In Odd Duck we meet Theodora and Chad, neighbor ducks who both waddle to the beat of a different drum yet actually have tons in common. Although the two become BFFs each one thinks the other is the strange one. Upon overhearing someone call one of them, odd, Theodora and Chad clash over which duck was being referred to. This winning picture book is a salute to individuality and uniqueness, a recurring theme for Castellucci.

How much of you is in Theodora?

I think all of me is in Theodora and Chad. It took a long time for me to figure out that my oddness was also what made me interesting.

Why do you think opposites Theodora and Chad attract?

I have always been a big fan of opposites. Some of my favorite friendships are the ones where we see the world in a similar way but we like radically different things. In Odd Duck, Chad and Theodora might move through the world very differently, but I think fundamentally they feel the same way about things.

Why do people shy away from what they don’t consider “normal”?

It’s hard to be odd. I’m no psychologist, but I think that we tend to gravitate toward groups to feel safer and that is what “normal” means. But I think that being odd is normal to other odd people. So I say, find your odd tribe and you will be “normal”! Because I think really there is no such thing as normal. And I think that everyone on the entire planet is a little odd about something.

Learn more about Cecil Castellucci and her other books at misscecil.com. For info about Letters for Kids and more about Odd Duck, read the extended interview at LAParent.com.

Find the extended interview at LAParent.com and remember to pick up their new May issue.

Click here for the link to my review of Castellucci’s First Day on Earth, a fantastic YA novel from 2011.