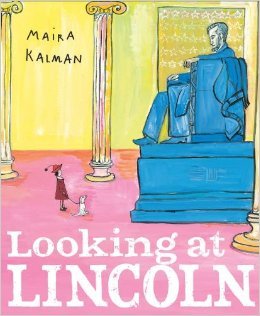 Looking at Lincoln written and illustrated by Maira Kalman, from
Nancy Paulson Books.

AMERICA’S 16th PRESIDENT, THE CIVIL WAR AND THE GETTYSBURG ADDRESS

Abraham Lincoln is probably one of the most recognizable American presidents, and with little wonder. His profile is on the penny, his portrait on the $5 bill, and his legacy is taught in both language arts and history classes at an early age. With today being the 150th anniversary of the Gettysburg Address, Maira Kalman’s non-fiction picture book Looking at Lincoln is a perfect introduction (or curriculum supplement) to this venerable leader.

The book features many details about Lincoln, ranging from his birth through his assassination. For example, Lincoln only attended school for a year and a half and was mostly self taught; as a youth, he was kicked in the head by a mule; he always had an apple on his desk; he loved Mozart’s music. These details on the intimacies of his life help humanize Lincoln, so that he seems more of a person as opposed to a figure. Children will be intrigued to know that Lincoln liked to argue a lot and to eat vanilla cake. He stuffed notes in his stovepipe hat.

To her credit, Kalman presents the difficult subjects— slavery, the ensuing Civil War, and, of course, Lincoln’s assassination—delicately but realistically.

Terrible things happen in a war. The Civil War ground on. Lincoln went to Gettysburg, Pennsylvania, the site of a big battle. Thousands of soldiers were buried there. Many with just a number on their grave. On that sad land, Lincoln gave one of history’s greatest speeches, The Gettysburg Address. It was short—only 272 words—ending with “…government of the people, by the people, for the people shall not perish from the earth.” The war finally ended in 1865. Almost a million people had been killed or wounded. The North had won.

I had no idea that I could learn so much from a children’s picture book, but after reading Tina Nichols Coury’s book Hanging Off Jefferson’s Nose: Growing Up On Mount Rushmore ($16.99, Dial Books for Young Readers, ages 5 and up) with its fantastic, beautifully envisioned illustrations by Sally Wern Comport, I’m convinced.

Perhaps like me, you were on a cross country teen tour when you first laid eyes on Mount Rushmore National Memorial in the Black Hills of South Dakota. Or maybe you and your family were vacationing and taking in some of America’s most iconic landmarks. Whatever brought you to Mount Rushmore, I am sure it is something that you have not yet forgotten. Well neither could author Coury who was determined to share the story of “one little boy who grew up to complete one of America’s greatest monuments.”  I am so glad she did!

The book introduces us to young Lincoln Borglum, son of the renown sculptor Gutzon Borglum, and transports us back to the 1920s into his father’s art studio where he spent much of his childhood. Lincoln preferred sweeping up the studio or modeling for his father over socializing with other children his age. The family moved often for the elder Borglum’s commissions and forging friendships for a shy lad like Lincoln proved a lot less interesting than observing a master sculptor at work.

When Gutzon Borglum shared with businessmen his idea to carve the faces of Washington, Jefferson and Lincoln into a South Dakota mountain, it was welcomed as a terrific venture.  What I did not know was that originally the monument was conceived with only the above mentioned three presidents and that it was President Calvin Coolidge who suggested the addition of Teddy Roosevelt.  I also was very surprised to learn that during the half-completed  carving of Thomas Jefferson it was discovered that the “rock under Jefferson’s face was unstable.”  The entire work had been for naught and had to be demolished and begun all over again.

There are so many other interesting facts that Coury has provided, but rather than go into too much more detail here, suffice it to say that we find out Lincoln eventually chose working alongside his father on the massive monument rather than attending university. The significance of  that choice was major as it was Lincoln, after his father’s death, who would be instrumental in continuing his father’s work and seeing it to fruition.

While I do not picture 5 year olds reading this book on their own, I do envisage parents, older siblings and librarians happily sharing the story with them. With the publication of Hanging Off Jefferson’s Nose we now have a child-friendly vehicle from which to launch into our own impressions of this great monument depicting two Founding Fathers along with two other great presidents and for that alone we can be grateful. Happy Independence Day!

Today I am celebrating the birthday of our nation’s 16th president, Abraham Lincoln, with a roundup of several noteworthy children’s books. It’s definitely worth noting that February 12th is also the 100th anniversary of the NAACP as well as Charles Darwin’s birthday.

What Lincoln Said, by Sarah Thomson, illustrated by James E. Ransome is recommended for ages 6-9. From earning his first dollars to outlawing slavery, Honest Abe’s life was one of hard work and dedication. Along his journey, Lincoln’s quotes, such as “Leave nothing for tomorrow that can be done today,” and “If slavery is not wrong, nothing is wrong,” were as well known as the man himself. In this book we learn about Lincoln’s character through his words as well as his deeds.

Lincoln and His Boys, by Rosemary Wells, illustrated by P.J. Lynch, has a suggested age range of 8-12. Told through the eyes of Lincoln’s sons Willie and Tad, this engaging story about Lincoln’s rise in politics is both enlightening and endearing. Willie and Tad were the closest of the Lincoln boys and their experience being “first children” is probably not very different than what Malia and Sasha Obama will encounter in the White House today.

Lincoln and Douglass: An American Friendship by Nikki Giovanni, illustrated by Bryan Collier, for ages 5 and up, is a deftly crafted story bringing together two of history’s greatest statesmen. The book introduces young readers to a most unusual relationship of its time. The year is 1865 and the setting is Lincoln’s Inaugural Ball. From there the book details the path of Douglass, former slave, leader of the abolitionist movement and reformer and how it crossed fortuitously with that of Lincoln, our nation’s 16th president.