WHAT I WANT YOU TO SEE 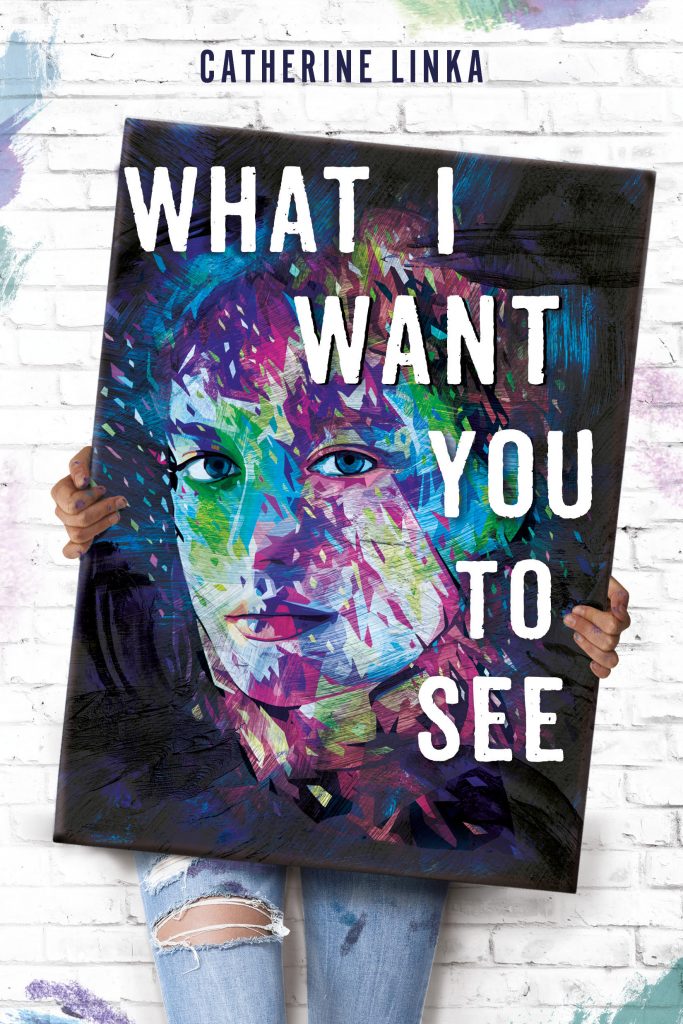 The author of A Girl Called Fearless and A Girl Undone, presents a compelling tale about moral ambiguity and how our perceptions shape our decisions and what we see and believe in the young adult novel, What I Want You to See.

Following a devastating senior year, things are looking up for eighteen-year-old Sabine Reyes. She has been accepted to a prestigious art school on a full scholarship, including an allowance for housing. Still traumatized from the events of her senior year, which left her homeless, she becomes alarmed when her professor, a noted artist, is brutally critical of her artwork. Nothing she does meets his approval and she is fearful that failure in this class will result in the loss of her scholarship. Vulnerable, and under intense pressure, she is manipulated  by someone she trusts, and engages in unethical activity she at first rationalizes and later realizes is wrong.

Set in contemporary Pasadena and surrounding areas, Linka’s book explores Sabine’s last year of high school and how the events of that year impacted her later actions and decisions. This gradual build up, intertwined with Sabine’s current life of school, work, friendships, and loves, dramatically increases the story’s intensity. Readers helplessly witness Sabine’s entanglement in a criminal world and the staggering consequences she faces when exposed.

Linka’s love of art is clearly evident in the story and provides fascinating backdrops and insights. Yet, this story is also shaped by Linka’s growing concern over homelessness, especially among college students. In Sabine, Linka has created an innocent and fragile young woman who has experienced hardships unimaginable by most of her peers. Due to society’s negative impression of the homeless, Sabine lives in fear that her friends and classmates will find out about her earlier homeless experience. Yet this very hardship enables Sabine to treat the story’s homeless characters with dignity and respect. One such character, inspired by the author’s chance encounter with an older homeless woman, becomes the subject of a powerful work painted by Sabine.

I recommend this complex and gripping story, infused with the beauty of art and the ugliness of deceit and betrayal.

Support a local independent bookstore by ordering your copy of What I Want You to See here. 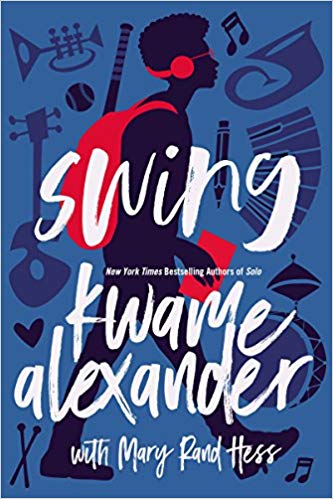 Kwame Alexander’s Newbery Award-winning novel, The Crossover, used basketball as the backdrop for the story. His new book, written with Mary Rand Hess, is a novel-in-verse called Swing with a prologue beginning:

We were halfway through

it’s a good bet that the title refers to baseball.However, Hess and Alexander also collaborated on the 2017 novel Solo about rock and roll, and it turns out that Swingis as much about swinging the beat as swinging the bat. Most of all, though, it’s about putting yourself out there and embracing life.

The book opens as narrator Noah and his best friend Walt (AKA “Swing”) have again failed to make their high school baseball team. Noah wants to give up, lamenting:

But the truth is

Noah defines himself by what he can’t do. He can’t play baseball, and he can’t tell his longtime crush, Sam, how he feels about her. With Walt’s encouragement, Noah tries writing poetry for her, but it’s not very — well, see for yourself:

to be my symphony

Even Walt agrees the poem is not good enough to give to Sam, but when Noah buys a second-hand Louis Vuitton Keepall as a birthday gift for his mom, he finds old love letters stashed in the lining that inspire him to try again.

Out of the book of dares

And make it mine.

The love letters give him a scaffold for creating art worth sharing. Noah uses them to make blackout poetry — he blacks out some words so that the ones that remain legible form a new poem — and then adds original graphic elements with his pen. The resulting mixed media art stands out, even in this book composed entirely of poems. They make me curious; I have to figure out which letter Noah uses for which piece. They make me want to try writing blackout poetry myself, and they make Noah more confident, able to express himself and impress the girl he loves.

As wonderful as Noah’s art is, my favorite creation in this book is, simply, Walt. I want to reread Swingto spend more time with him. Noah describes him and his quirks like this:

is obsessed with jazz,

if it’s the last thing

When it comes to “finding cool,” especially with regard to girls, Walt relies on his older cousin Floyd and a podcast called The Woohoo Woman. He won’t give up, whether he’s practicing baseball or finding a date for prom. He even gets a tattoo inspired by Tupac Shakur’s acronym THUG LIFE. Walt’s tattoo says HUG LIFE, exhorting everyone who sees it to embrace the world, and all its people and opportunities, wholeheartedly.

Noah’s quest to win Sam over from her boyfriend takes flight after Noah’s parents go on a trip, leaving him home alone for a few weeks. Noah’s grandmother is supposed to supervise him but doesn’t believe it’s necessary. Walt, on the other hand, moves right in, believing Noah absolutely needs supervision if he’s going to win Sam’s heart. Walt anonymously sends Sam one of Noah’s poems, but it’s still up to Noah to decide how and when to reveal himself. Will he ever convince Sam to promote him out of the friend zone?

Swing is most of all a coming-of-age story, but there is a mystery in the background throughout. People find American flags left on lawns, stuck on windshields, and painted on freeway exit signs, and the town debates whether the flags represent a show of patriotism or a sinister warning.

…no one can agree

on why the flags are here,

and whether or not

The flag mystery leads a fairly light story into heavier territory. I believe in building empathy and understanding through books about difficult topics; however, in Swing, the social justice issues are not well developed. Because of this, I felt unprepared for a tragedy (caused by police using excessive force) at the end of the book, and I think younger, sensitive readers in particular may have the same experience. Most of us dislike spoilers, but with Swing I think it’s fair to provide readers with a little warning before reading and a lot of opportunities for discussion afterward. In that context, I recommend Swing to readers fourteen and up as both a funny coming-of-age buddy story and a serious vehicle for discussing the people we as a society forget, fear, or abuse. 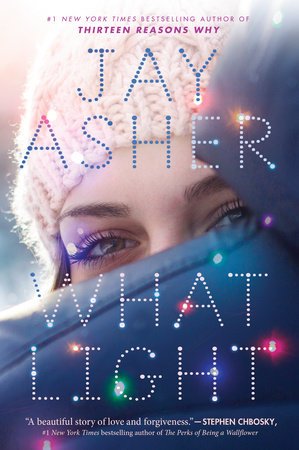 What Light by Jay Asher was released in October and was a perfect way to kick off the holiday season, but it’s also a book that keeps the holiday spirit going all year round. In fact, I’d say anytime is a great time to read a romance. It tells the story of teenager Sierra, whose family owns a generations-old tree farm and spends every December in California selling their trees to locals there. Her overprotective father keeps all the worker boys at bay, even though Sierra has no interest in a fleeting romance—that is, until she meets Caleb. Struck by his charming character and smile, Sierra’s feelings for him clash with her high standards for relationships as well as the rumors she hears about Caleb. He has a history that looms over him like the Ghost of Christmas Past, but Sierra tries to lighten the burden he’s carried with him for so long.

Sierra and Caleb share the instant love of Romeo & Juliet (though without the dramatic dual-sacrifice ending). In fact, the title, What Light, is a nod to Romeo & Juliet’s first meeting: “What light through yonder window breaks? It is the east, and Juliet is the sun.” However, the title becomes much more meaningful as the relationship between Sierra and Caleb unfolds.

Given that it is only 186 pages, and given Asher’s ability to instantly make me care about his characters so much that I need to know what happens next, it’s no surprise that I finished this book in one day. What was a surprise (and delight) was just how much my teenaged niece, new to Asher’s novels, loved the book as well. She had told me that she needed a book for her independent reading at school, and I immediately suggested this. She was going on a trip, and I told her it would be perfect for the plane ride. Upon her return, she messaged me immediately and said that she loved the book, could not put it down, and had never been so happy to be “forced” to read a book. She loved the bond between Sierra and Caleb and said, “It’s so cute….  I want this to happen to me.”

This story is one of family and friendship, understanding and forgiveness, love and loyalty, and, most of all, hope. My niece has been passing this book around to her friends, and I have been passing it along to those of my students who are avid young adult readers and enjoy a spark of love and hope in their lives. In a world that offers so much darkness at times, Asher’s latest novel offers us some well-needed light.