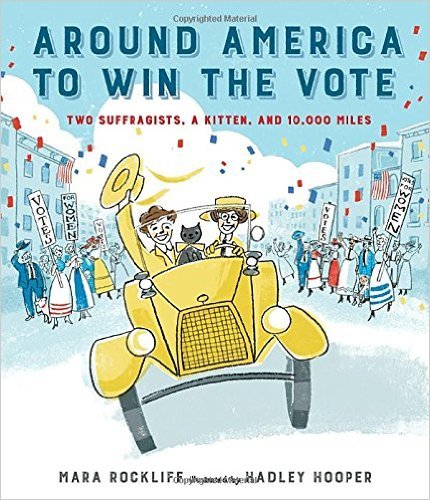 A Roundup of Election & Voting-Themed Books for Kids 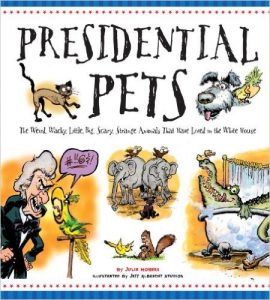 A not-to-be-missed book for Election Day 2016 and beyond, Presidential Pets is ideal for schools and homes alike. From Abraham Lincoln to Zachary Taylor, these American presidents all have one thing in common, a plethora of noteworthy pets. With intros in rhyme, this 95-page non-fiction picture book is filled with funny facts about presidents, their families, their pets as well as their career accomplishments. Did you know that Andrew Jackson had a cussing pet parrot who had to be removed from his funeral for her foul language? Or that Herbert Hoover’s son Allan Henry had alligators “that roamed through the grounds” of the White House? Or lastly, that Grover Cleveland, the “only president to serve two terms that weren’t back-to-back,” had a virtual menagerie of animals during his presidency including Foxhounds, Dachshunds and chickens?
Moberg has done her homework brilliantly choosing an engaging and entertaining subject that brings to light all the humorous details kids and parents will love about the variety of animals and owners who once called the White House home. The cartoon-style artwork from Jeff Albrecht Studios is a whimsical addition to each presidential pet profile and is sure to bring a smile to many faces this election season. 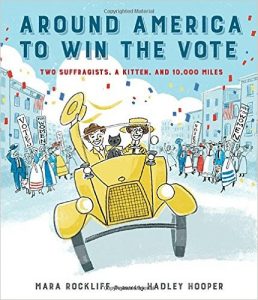 Around America to Win The Vote: Two Suffragists, a Kitten, and 10,000 Miles
Written by Mara Rockliff
Illustrated by Hadley Hooper
(Candlewick Press; $16.99, Ages 5-8)

One hundred years ago, “On April 6, 1916, a little yellow car set out from New York City.” The car’s occupants were Nell Richardson, Alice Burke, and a little black kitten. These courageous ladies were on a mission. Together they would drive around the USA to campaign for women’s right to vote. Throughout their journey, they encountered people from all walks of life, and situations that might have derailed other less dedicated individuals. Whether facing blizzards or getting stuck in the mud held them up, these were just temporary setbacks. Nothing would curtail Richardson and Burke from cruising across the country for this important cause. Nope. Not blocked roads or getting lost for days. Onwards they drove, getting invited to fancy dinners and local schools. They joined a circus parade and attended a tea party, all the while spreading their message, “Votes for Women.” Finally, after ten thousand miles, Richardson needed a rest, but Alice felt motivated to cover more ground. This time, however, she chose to travel by train!

In the interesting back matter, Mara Rockliff shares four pages of useful information that even parents will find enlightening. She explains about the car Richardson and Burke used for their Votes for Women adventure, and how uncommon it was to travel by auto in 1916. Readers learn how, as far back as 1776, First Lady Abigail Adams urged her husband John “to remember the ladies.” We know what came of that request. Also included  are sources and recommended reading on this timely topic. Rockliff has done a fabulous job of making the suffrage movement accessible to hong readers with her upbeat approach and language. The story of Richardson and Burke was one I’d never heard about so I’m glad I had a chance to step back in time with these two inspirational women. Hooper’s illustrations complemented the text and theme, allowing us to feel the exuberance of the journey along with the book’s history-making heroines. 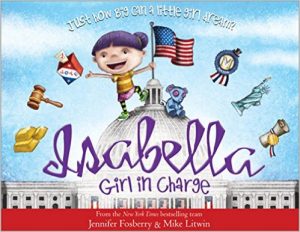 Written by Jennifer Fosberry
Illustrated by Mike Litwin
(Sourcebooks/Jabberwocky; $16.99, Ages 4 and up)

Isabella’s back, this time visiting Washington, D.C. with her parents. But why, you may ask? She’s channeling and celebrating five trailblazing women in the U.S. government culminating with her attending the first female president’s inauguration, and she simply cannot wait. Fosberry builds up to this momentous event by highlighting women throughout our political history who were firsts in their field and who opened doors for themselves and future generations that, up until that time, had been closed to them.

You’ll meet Susanna Madora Salter, the first female mayor, in Argonia, Kansas. Incidentally, I had no idea that Kansas had given women the right to vote back in 1887, although Wyoming allowed women to vote as early as 1869. Isabella also introduces readers to Jeannette Rankin, a truly independent and colorful character who, in 1916, beat seven men to get elected as the first woman in Congress. In 1925, Nellie Tayloe Ross broke the glass ceiling by being elected the first female governor of Wyoming following the death of her governor husband, William, while still in office. She also was named first female Director of the Federal Mint by Franklin Delano Roosevelt. Another woman to whom we owe a great debt is Frances Perkins. She, too, served under FDR, and had numerous appointments, in her lifetime, the most famous being “the first woman to serve on the Cabinet and be in line of succession to the presidency! Last, but not least is Sandra Day O’Connor who in 1981 was the first woman appointed to the U.S. Supreme Court only after another first as the State Majority Leader in the Arizona State Senate. How’s that for accomplished women? Fosberry’s chosen to highlight these women with their varied backgrounds and experience to serve as role models for young girls everywhere who aspire to reach their true potential.

There’s lots of fun wordplay (“Let’s vote on breakfast.” “Capital idea!”) and cheerful artwork throughout this delightful, empowering picture book, ending with a time line and bios for each of these amazing women. Isabella: Girl in Charge will also be available on Put Me in The Story, the #1 personalized book platform in America. 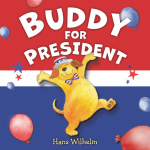 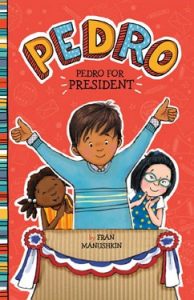 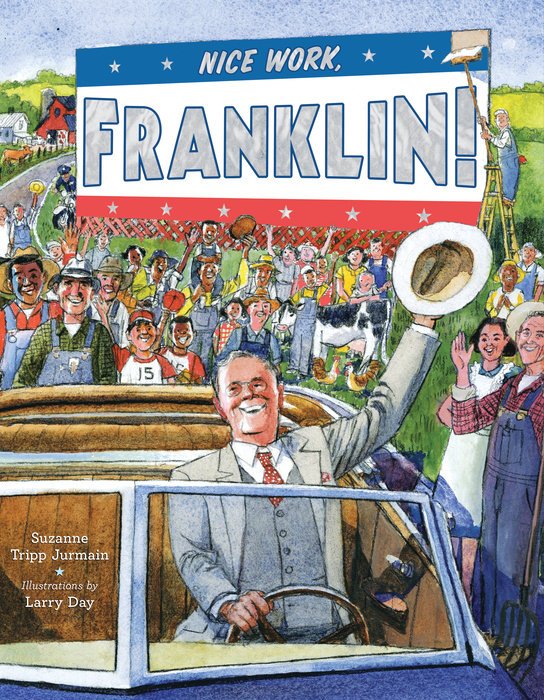