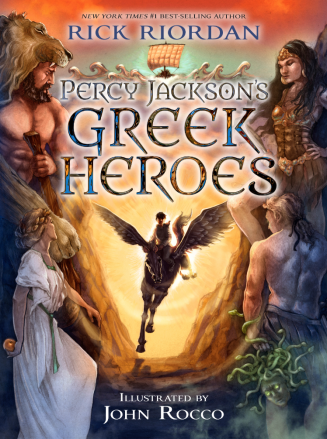 “… We’re going back about 4,000 years to decapitate monsters, save some kingdoms, shoot a few gods in the butt, raid the Underworld, and steal loot from evil people.” (p. ix).

Oh no! Percy Jackson has “sold out” again. For free pepperoni pizza and blue jelly beans, Percy followed up his book on the ancient Greek gods with one on Greek heroes. So, for those who want to be famous monster fighters, Percy advises reading this book to learn from the heroes’ mistakes and to remind oneself that:

… no matter how much you think your life sucks, these guys and gals had it worse.

Percy embellishes the adventures of twelve ancient Greek heroes and heroines with lively commentary, snappy observations, and amusing references to contemporary culture. The irreverent Percy refers to Jason and his Argonauts as the “demigod dream team” (p. 237) and writes that:

Theseus was the original ADHD poster child. He was hyper in diapers (p.149).

Witty chapter titles, such as “Atlanta vs. Three Pieces of Fruit: the Ultimate Death Match,” are sure to keep young readers chuckling and turning the pages. In addition to recounting the tales of well-known heroes like Hercules, Percy shares those of lesser known heroes and heroines. Riordan’s inclusion of two heroines, Otrera and Cyrene, allows readers to see girls and women as heroes, something not often seen in ancient Greek society.

Rocco’s vivid and powerful illustrations will surely catch the attention of even reluctant readers, pulling them into the book. The breath-taking illustrations of Hercules slaying the hydra and Daedalus pulling Apollo’s chariot (on the inside front and back covers) reminded me of the Renaissance masters’ red chalk drawings. Two eye-popping and highly readable maps of the ancient Mediterranean world and the locations of Hercules’ twelve tasks are included along with background reading and websites.

Percy’s final words for would be heroes and heroines: 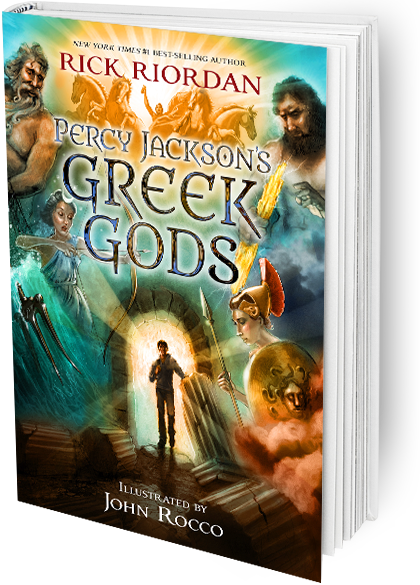 Rick Riordan’s seven heroes of Olympus are at it again, fighting monsters and trying to save the world with a little help (and hinderance) from the gods, says MaryAnne Locher, today’s reviewer.

At the end of Rick Riordan’s The Mark of Athena, Percy and Annabeth have fallen into the depths of Tartarus and must find the Doors of Death in order to leave. In Riordan’s latest, The House of Hades – Heroes of Olympus, Book Four (Disney-Hyperion/Disney Publishing Worldwide, $19.99, ages 9-12), the other five heroes have been instructed by Percy to not only return the Athena-Parthenos statue to abate a war between Camp Half-Blood and Camp Jupiter, but to also find and seal the earthly side of the Doors of Death, preventing the rise of the evil Earth Mother, Gaea, and her league of underworld followers.

The reader will be reacquainted with monsters from previous books, as Percy and Annabeth have to face those they’ve slain in the past as they walk through their own personal Hell. But this is far from a rehash of books past, as some of the darkest and deadliest monsters and gods are introduced for the first time. Riordan doesn’t stop with imaginary monsters, he also makes the young heroes, as well as readers, question themselves and face their own personal demons in this very diverse book of love, friendship, and the fight between good and evil. Hazel is at a crossroads, and her decision affects the outcome of the quest. Nico faces being different than his friends. Frank, Leo, and the others all have to stretch their attitudes and abilities to save the world.

Will the seven accomplish their goals? Will Percy and Annabeth be trapped at the Doors of Death for all eternity if the doors are sealed? Well, you’ll have to read the book and find out for yourselves. To tell you would be just plain evil.