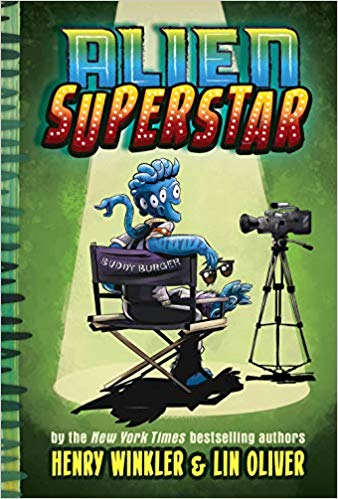 I had the privlidge of hearing Tim Federle speak at the Los Angeles Times Festival of Books a little over a year ago. Taken by his personal story as well as his charm and sense of humor, I bought his then newly released debut novel, Better Nate Than Ever, and, of course, had him sign it. Little did I know that his book would become one of my favorite middle grade novels in addition to being the most talked about middle grade book of 2013!

Nate Foster is your not-so-average kid from Jankburg, Pennsylvania. He’s never really fit in with the other boys. He prefers practicing his singing and acting with his best friend and self-appointed acting coach, Libby. Much to his family’s chagrin, Nate’s landed the role of second understudy for E.T. in E.T.: The Broadway Musical. The only reasons his parents let him chase his dream of becoming an actor are his Aunt Heidi, an aspiring actor herself who lives in New York City, and because Nate is drawing an income from the production.

Nate finds out that Broadway is not all glitz and glamour, people and situations are not always as they first appear to be, and hard work sometimes pays off, despite a lack of formal training. Federle addresses difficult topics and feelings encountered by this late tween/early teen age group with both honesty and sensitivity. This heartfelt coming of age book with its diverse cast of characters is truly inspiring and takes the reader through a gamut of emotions. Bravo! I look forward to future Federle performances.