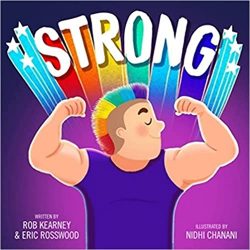 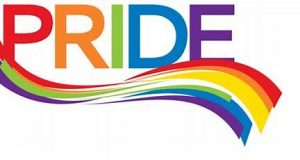 It may be the last day of Pride Month, but here’s a book worth celebrating year round! 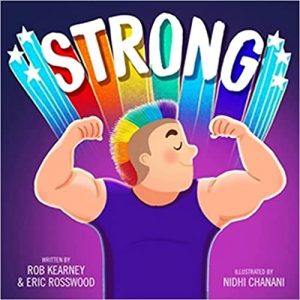 Strong is the kind of feel-good picture book that demonstrates to children, through a real-life example, the benefits of being true to themselves and following their dreams.

In this accessible biography, readers learn how, from an early age, Rob Kearney showed an affinity for lifting heavy things whether that was milk bottles or bags filled with groceries. As he grew so did his strength. He could easily pull a tug-of-war rope or lift cheerleaders sky-high. This powerful ability made him feel good about himself as his interest in weightlifting blossomed. “But Rob’s favorite sport was weightlifting. It required him to use every muscle in his body.” Sentences like this one give readers a wonderful understanding of what it was that appealed to Rob and why he ultimately pursued weightlifting as a career.

Rob’s life was forever changed after being introduced to the Strongman competition at age 17. He learned it was SO much more than lifting heavy weights. To qualify, he’d have to be able to pull a vehicle, flip an enormous tire, lift a log over his head, and lots more that’s described in fascinating backmatter. The art and prose depict how committed Rob became and how he trained before school by running, swimming, and lifting all sorts of things. At his fittest, he could lift over 400 pounds which is more than a refrigerator!

Without ever stating the main character’s queerness outright, the authors describe how, when not in his workout garb, Rob had a truly original style with his hair cut in a Mohawk, along with a flair for dressing in bright, bold colors and patterns that were 100% him. They also show Rob coming in last place at his first competition which is realistic as well as smart to demonstrate to children. People do not automatically win. Success takes hard work. And Rob was determined. He also was in love. Chanani’s vibrant art pairs perfectly with the text and reflects Rob’s personality in all its Strongman glory.  A favorite spread of mine is below.

While training Rob met Joey who motivated Rob to be himself. While it’s not clear how long after meeting Joey Rob went on to win the North American championship, what is clear is that Rob’s personal growth helped him overcome any challenges such as bullying and self-doubt he may have had on his journey. This picture book, full of hope and positivity is recommended for any child questioning their self-worth. Rob’s candid Author Note on how being openly gay helped “smash stereotypes” about sexual orientation and perceived strength reminds me of my former gay roommate in London who was a proud tri-athlete in the ’80s when laws still criminalized homosexuality. I believe this book does a great job of acknowledging and encouraging any children feeling unsure about themselves whether that relates to their sexuality or their self-confidence.

JULIÁN IS A MERMAID
Written and illustrated by Jessica Love
(Candlewick Press; $16.99, Ages 4-8) 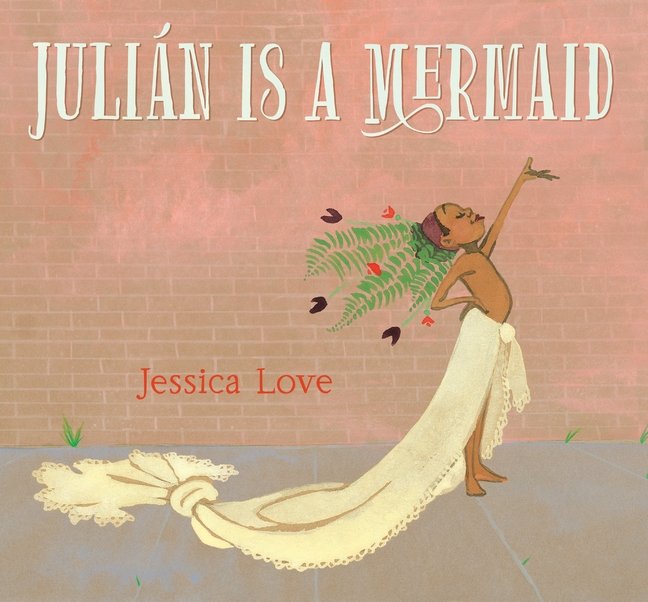 Julián is a Mermaid, by Jessica Love, is a brilliant debut picture book. As Julián and his abuela leave the public pool, they share the subway ride with some women dressed as mermaids. Julián loves mermaids and feels he is one too. He demonstrates this while his abuela’s away taking a bath. At the crucial moment of discovery, Abuela encourages Julián and takes him to his tribe: a gathering of likeminded people.

Jessica Love’s beautiful sentiment is echoed in her vibrant, festive art done by hand with ink, gouache, and watercolor on brown paper. Richly rendered, expressive characters stand out against muted backgrounds. This 40-page picture book gently shows how easy it can be to accept others. Potentially contentious moments are, instead, depicted with understanding.

Using words sparingly, Julián is a Mermaid captures the colorful expansiveness of our imaginations when given free rein.

About the author: Jessica Love is an illustrator and Broadway actress. She has a BA in studio art from the University of California, Santa Cruz, as well as a graduate degree from Juilliard. She lives in New York.