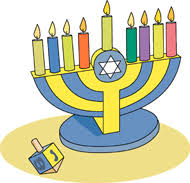 Two wonderful new books with a Hanukkah theme are reviewed below. However, though both books are Hanukkah-themed, these particular choices convey more about family and togetherness, an important part of the holiday, than about the Hanukkah story itself. 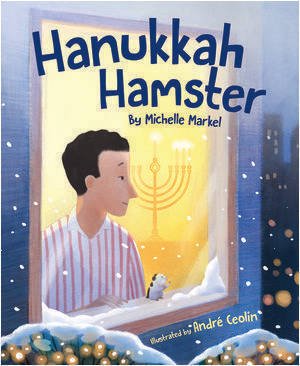 I loved the feeling Hanukkah Hamster gave me as I was reading. Edgar, the cab driver, finds a hamster in his cab and, being a bit lonely living away from family in Tel Aviv, reluctantly brings him home. Gently but hesitantly he incorporates the animal into his Hanukkah celebrations. As Edgar dreads having the real owner claim the hamster, and sharing pictures of his “lost” hamster on his cell phone, it becomes clear that the little rodent, now called Chickpea, has become a big part of Edgar’s family. To my delight, a surprise, big-hearted resolution saves the day. I could easily see this story being read aloud to an elementary school library audience where kids might not know about lighting candles on a menorah, but certainly can relate to a lost pet! Ceolin’s artwork adds just the right mix of warmth and light to this terrific tale! Buy the book here: Hanukkah Hamster 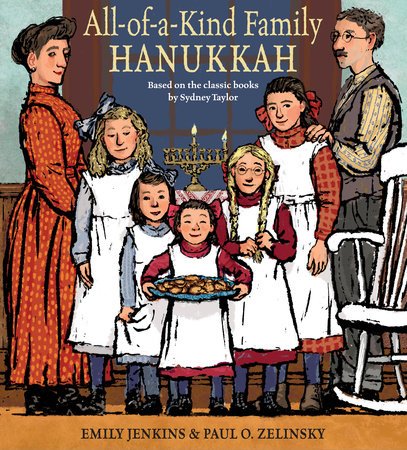 ALL-OF-A-KIND FAMILY HANUKKAH
Written by Emily Jenkins
Illustrated by Paul O. Zelinsky
(Schwartz & Wade Books; $17.99, Ages 3-7)
★Starred Review: Kirkus Review
All-of-a-Kind Family HANUKKAH, which is based on the classic books by Sydney Taylor, and written by Emily Jenkins and illustrated by Caldecott Award-winning artist Paul O. Zelinsky, is a gorgeously illustrated longer picture book set in the turn of the century. With a glossary of terms and various notes from author and illustrator, you could easily use this book to cook up some delectable potato latkes!
Being from a large family with three sisters (and the lone brother), I can relate to this new story by Jenkins. The youngest girl, Gertie who is four-years-old, has older siblings and is always wanting to do whatever the older sisters are doing—even when it’s clear she is too young.  As the day progresses and the special latkes are being prepared (“… potatoes peeled, and potatoes grated, onions chopped …”) Gertie just demands to be included in the kitchen, but her tantrum sends her to her room until  Father kindly finds a way for Gertie to take part in the festivities. Jenkins’ rhythmic text makes you almost drool over the wonderful smells invoked from the baking the family is doing. Zelinsky’s illustrations capture the era completely and fill them with emotion, exuberance and tenderness. This is a classic story of family with warmth, joy and love all cooked in those delicious latkes!  See the author page here for her NY tour dates.
Buy the book here: All-of-a-Kind Family HANUKKAH
• Reviewed by Maureen Palacios, Owner
Once Upon a Time Bookstore

NOTE: Good Reads With Ronna makes no commission or profit from the sale of any book in this post. Our goal is to encourage the love of reading great books while supporting local independent bookstores.
Here are last year’s recommended reads for Hanukkah. 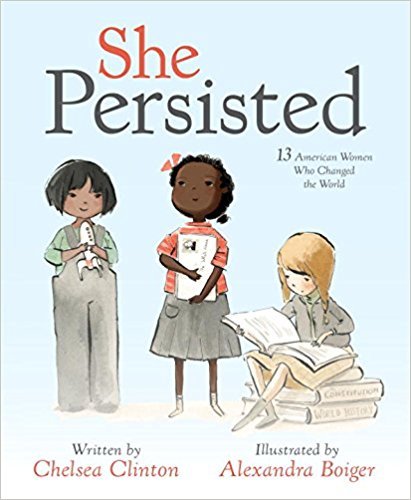 Leontyne Price: Voice of a Century by Carole Boston Weatherford
with illustrations by Raul Colón
(Alfred A. Knopf Books for Young Readers, $17.99, Ages 5-9)

I chose to read and review author Carole Boston Weatherford’s nonfiction picture book biography, Leontyne Price: Voice of a Century, not only because I’m a HUGE Porgy and Bess fan, but also to honor a powerhouse performer during Black History Month.

Other African-American kids might not have persevered in light of the pervasive prejudice that existed when Leontyne Price was growing up in the deep south, but thankfully she did. Price was born in 1927, just one year after Melba Doretta Liston, another musical talent. She grew up in Laurel, Mississippi to a hard-working, supportive, and music-loving mother and father. At a young age Leontyne found herself moved by the music she heard:  “Singing along to her daddy James’s records and listening to the Metropolitan Opera’s Saturday-afternoon radio broadcasts.” Her parents even sold their phonograph so their daughter could get a piano along with lessons.

Like the opera singer Marian Anderson before her, Leontyne felt the music stir within her as she sang in the church choir. Soon she was heading off to college to pursue a teaching career since, in that era, the chances of becoming a successful black singer seemed out of reach. Surely her talent played a part in that educational opportunity as I read online that she received a scholarship to attend university in Ohio. Everything changed however, when her singing talents were heard by the college president who “convinced her to study voice instead.”

It didn’t take long for Leontyne’s star to begin rising when she attended Julliard and began earning acclaim for her singing. Her first break came when she appeared on Broadway in Porgy and Bess. She was also the “the first black singer to star at La Scala, Italy’s famed opera palace.” What I would have given to be in the audience at that performance! Eventually she landed a lead role at New York’s Metropolitan Opera House, breaking new ground for generations of African-American performers to come.

Weatherford points out in her Author’s Note that while Leontyne may have achieved great fame, she “still encountered racism in the United States. To her credit, her wondrous voice overcame the obstacles.” This wonderful biography chronicles the life of an iconic 20th century opera singer who followed her dream and ultimately fulfilled it. As an adult, I can recall watching Price on Ed Sullivan but having no idea of what her  challenges would have been to gain recognition and be on TV. In fact, Weatherford says, “Price was the first black opera singer to perform on television in the United States.” What a great story for kids to read who may take for granted the struggles African-Americans like Price faced in the past. Nowadays it may just take a click of a cell phone to get a video made and uploaded onto YouTube for anyone to see, when in the previous century it may have taken an entire lifetime. I like that young readers can use this book as a jumping off point for reading more about influential African-Americans mentioned such as Jessye Norman, Grace Bumbry, Kathleen Battle, and Denyce Graves.

Raul Colón’s illustrations bring the same joy to this picture book that Price’s voice brought to anyone who heard it. From the opening spread, what looks like a rainbow of musical notes, takes on the form of a wave and flows through the book on pages when Leontyne sings. I also like the slight fuzziness of the artwork, as if we’re watching Price’s life unfold as seen on the early days of television broadcasting.

Before reading Leontyne Price: Voice of a Century I had no idea all the firsts this amazing woman achieved and I hope her accomplishments will inspire our 21st century children to keep reaching for the stars.

A Dance Like Starlight: One Ballerina’s Dream (Philomel Books, 2014; $16.99 Ages 5-8), by Kristy Dempsey and illustrated by Floyd Cooper, is reviewed today by Rita Zobayan.

Inspired by the story of Janet Collins, the first African-American ballerina at the Metropolitan Opera Ballet, A Dance Like Starlight: One Ballerina’s Dream is a story of high hopes and grand dreams. Told from the point of view of a young African-American girl in 1950s Harlem, the story encompasses her wish to become a ballerina set against the realities of racial prejudice and poverty. Even though our young heroine has practically grown up at the ballet school and has accomplished the movements, she is concerned that she will be held back by societal barriers. Could a colored girl like me ever become a prima ballerina? Mama says hoping is hard work. Mama unpins the extra wash she’s taken on to make ends meet…If there’s one thing Mama knows, it’s hard work. Mama works all day long every day, and most times on into the night, for the ballet school.

Hopes are raised when Janet Collins’ performance is featured in the newspaper. The young girl and her mother go to the opera and watch as Ms. Collins takes the stage, and suddenly the girl’s heart jumps up from where I’m sitting, soaring, dancing, opening wide with the swell of music. In my heart I’m the one leaping across that stage, raising myself high on those shoulders. When she and her mother head home, the girl knows that there is no need to waste my wishes. I’ve got dreams coming true.

The art work is a perfect match for the story, seeming almost ethereal, as if the viewer is watching from beyond, back in time. The muted colors give a feel for the setting, with the factories spilling out pillars of smoke.

To be completely honest, this book brought tears to my eyes. It is a wonderful tale of courage, perseverance, and determination. Children, regardless of ethnicity, will be able to identify with having a dream, the fear that it might not come true, and the inspiration to see it through. My girls certainly did.