How exciting to be participating in this cool Click’d giveaway!
Disney-Hyperion sent Good Reads With Ronna a copy to
check out, and is partnering with us
on this great giveaway opportunity for readers! 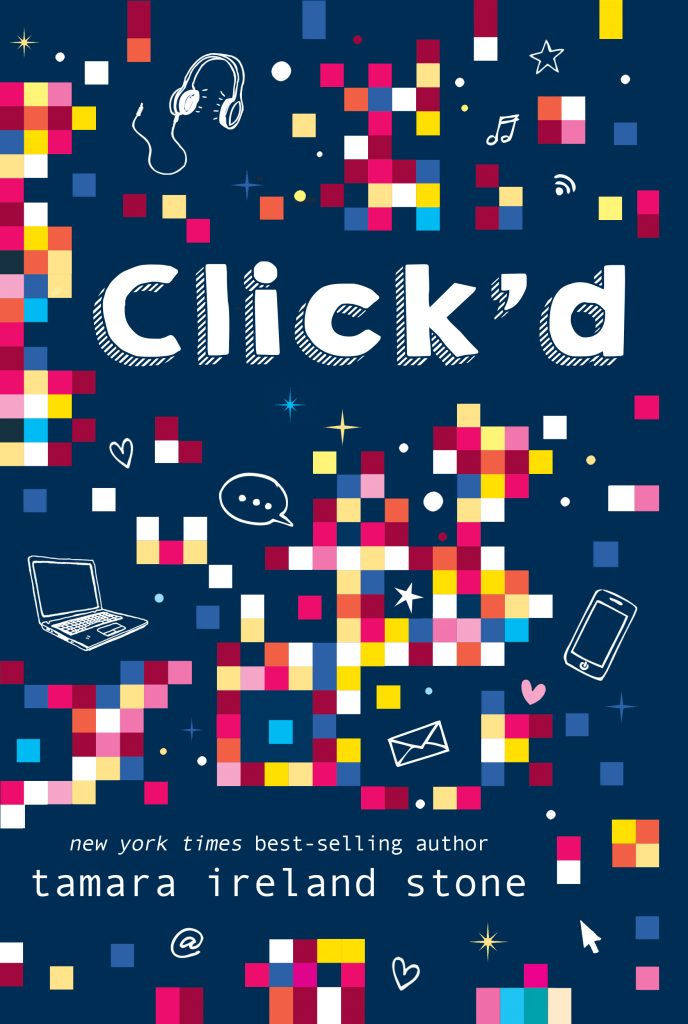 Scroll down to get the lowdown!

HERE’S AN EXCERPT TO GET YOU PSYCHED!

Read an excerpt from Click’d here. Get ready to see how Click’d will click with you.

Allie Navarro can’t wait to show her best friends the app she built at
CodeGirls summer camp. Click’d pairs users based on common interests and
sends them on a fun (and occasionally rule-breaking) scavenger hunt to find
each other. And it’s a hit. By the second day of school, everyone is talking
about Click’d.

Watching her app go viral is amazing. Leaderboards are filling up!
Everyone’s making new friends. And with all the data Allie is collecting,
she has an even better shot at beating her archenemy, Nathan, at the
upcoming youth coding competition. But when Allie discovers a glitch that
threatens to expose everyone’s secrets, she has to figure out how to make
things right, even if that means sharing the computer lab with Nathan. Can
Allie fix her app, stop it from doing any more damage, and win back the
friends it hurt-all before she steps on stage to present Click’d to the
judges? 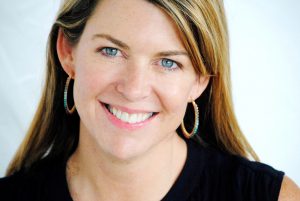 Tamara Ireland Stone (www.TamaraIrelandStone.com) is the
author of Time and Time Again, a collection of her two novels Time Between Us
and Time After Time, and the New York Times best seller Every Last Word.
A Silicon Valley-native, she has worked in the technology industry all her life,
first testing Atari game boards in her parents’ garage, and later, co-founding
a woman-owned marketing strategy firm where she worked with some of the
world’s largest software companies. She enjoys skiing, hiking,and spending time
with her husband and two children. She lives in the San Francisco Bay Area.

One (1) winner receives: a copy of Click’d
Please note that this Giveaway is open to US addresses only.
The Rafflecopter giveaway will end on 10/11/17 at 12:00a.m. PST.
Prizing and samples provided by Disney-Hyperion.
Thanks for stopping by and good luck!
If you’re not a winner, you can find this fab book for $16.99 at your local independent bookseller.
We know you’re going to love getting Click’d!! 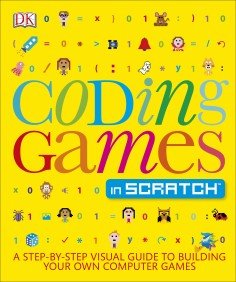 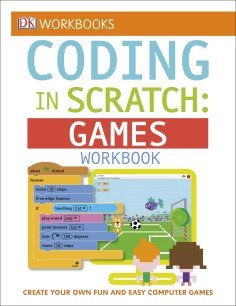 LET’S GET KIDS CODING IN SCRATCH

Coding Games in Scratch:
A Step-by-Step Visual Guide
to Building Your Own Computer Games
by Dr. Jon Woodcock
(DK; $19.99, Ages 9-12)

“I was so excited to review Coding Games in Scratch: A Step-by-Step Visual Guide to Building Your Own Computer Games and the handy workbook, Coding in Scratch: Games Workbook, both by Dr. Jon Woodcock,” says GRWR’s math maven, Lucy Ravitch!

My kids have been tinkering around with Scratch since they were about 6-years-old. For those unfamiliar with Scratch, it’s a free visual programming language that comes from MIT (Massachusetts Institute of Technology). You can find out more about it at www.scratch.mit.edu. Anyone can create stories, games, and animations and share them. Plus, you can download it onto your computer or play connected to the Internet.

I decided to start with Coding in Scratch: Games Workbook first. Reading through it, I became more familiar with how the games are supposed to work. There are handy arrows to all the parts you see on your screen as well as detailed instructions. This is really helpful for kids or adults who are not apt to explore all the buttons. In a way, I think both the Coding in Scratch: Games Workbook and Coding Games in Scratch: A Step-by-Step Visual Guide to Building Your Own Computer Games are also terrific or adults to read so they know what their kids are doing when they play and how they can assist if needed. 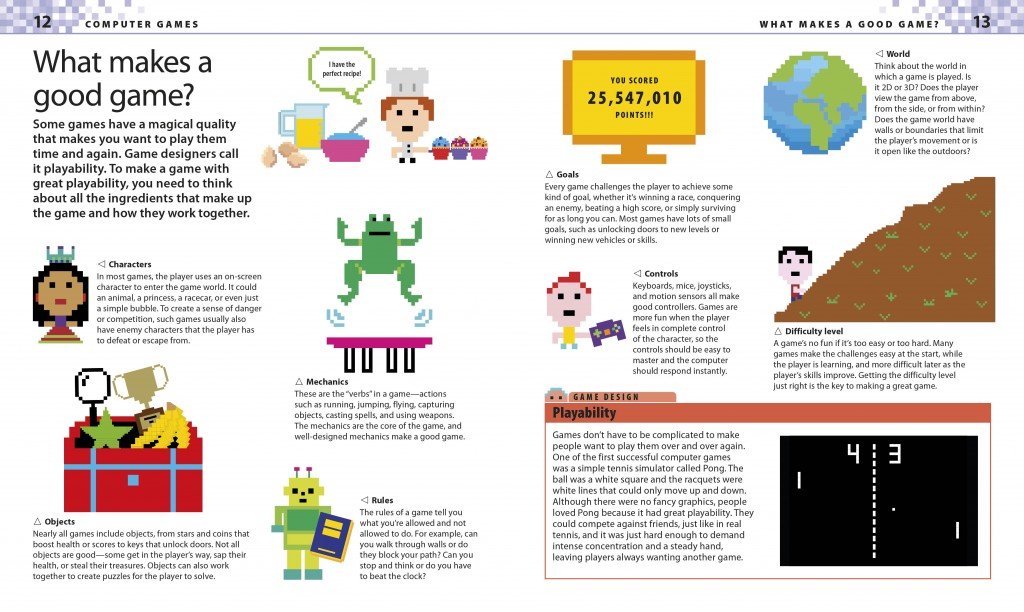 Interior image from Coding Games in Scratch: A Step-by-Step Visual Guide to Building Your Own Computer Games by Dr. Jon Woodcock, DK Books ©2015.

I had never played with Scratch before, but as I used both the book and workbook to make the suggested games, I learned a lot! The great thing about these books as well as Scratch is that readers see how it applies so many math concepts with the simple coding!

YouTube CEO Susan Wojcicki has said, “Learning to code makes kids feel empowered, creative, and confident,” and I agree. After following the directions and learning how to make a sample game, I wish I’d had more time to tinker around with it and make my own creative game or animation. You might think that making a computer game is not a good use of time (I know I’ve been guilty of this), but after seeing all the math and logical thinking that goes into making a complete game in Scratch, I can tell you it is an educational and helpful exercise. I found it interesting that many of the big names in the computer industry – Jobs, Wozniak, and Zuckerberg – all made computer games as children.

In the book, Chapter One covers computer games: the various types of games, what makes a good game, and how coding works. Chapter Two talks about getting Scratch, either onto your computer or playing online, along with a tour of what the basic screen and controls look like. Chapters Three through Ten are directions for games that you can make. Chapter Eleven explains what can be next for you and your programming child, followed by a Glossary and Index. 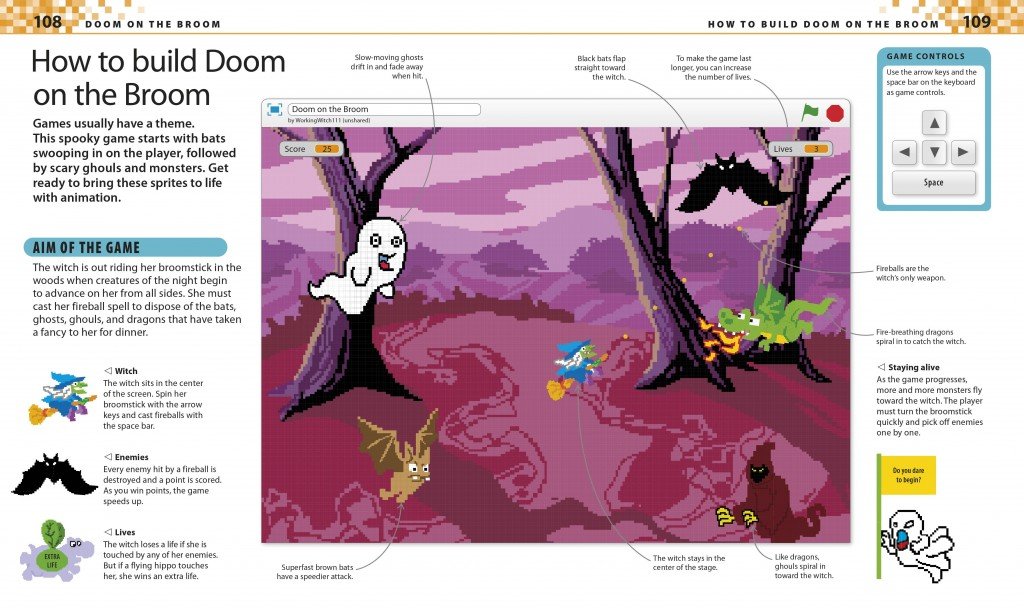 Interior image from Coding Games in Scratch: A Step-by-Step Visual Guide to Building Your Own Computer Games by Dr. Jon Woodcock, DK Books ©2015.

I went ahead and made the first game in Chapter Three and just in that first game alone I learned how to:
– assign sound effects
– put the code directions for the sprites (characters) using if-then blocks and repeating blocks
– pick a background
– make sprites, name them, and move them in different directions (using degrees of rotation)
– add chance (assign it to pick a random number between 1 and 6)
– use the coordinate system along the x and y axis (including negative numbers)
– create variables for sprites, and
– run the complete project and check for bugs (mistakes in the program)

I noticed that as the chapters progressed the games got a bit more complex, even though they’re all actually simple games. If you use this book, it can expedite the learning curve for making your own games. You’ll also discover all the intricacies that Scratch games have to offer. My 10-year-old and I started to do another chapter and it was a fun activity to do with him. It’s amazing to see how fast children learn how to use the program.

After reviewing the Coding Games in Scratch: A Step-by-Step Visual Guide to Building Your Own Computer Games and Coding in Scratch: Games Workbook, I’d easily recommend getting both. Though the publisher’s recommended age for these books is ages 9-12, in my opinion even younger children would enjoy it. The book is extremely helpful to accelerate the learning of what fun, creative games you can make in Scratch, and the workbook makes sure you know the terminology and applications of the components of Scratch. I hope your children enjoy coding and that you can join them in discovering how fun and educational it is to create computer games!

Read more here about why kids should code. 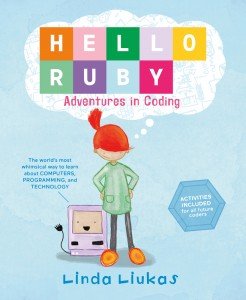 Linda Liukas’s Hello Ruby is a book that first caught my eye on Kickstarter. In fact, I heavily modeled my Kickstarter project after it since its campaign had tons of contributors and raised over $380,000! After receiving a lot of attention, it got picked up to be traditionally published with an imprint of Macmillan, Feiwel and Friends. 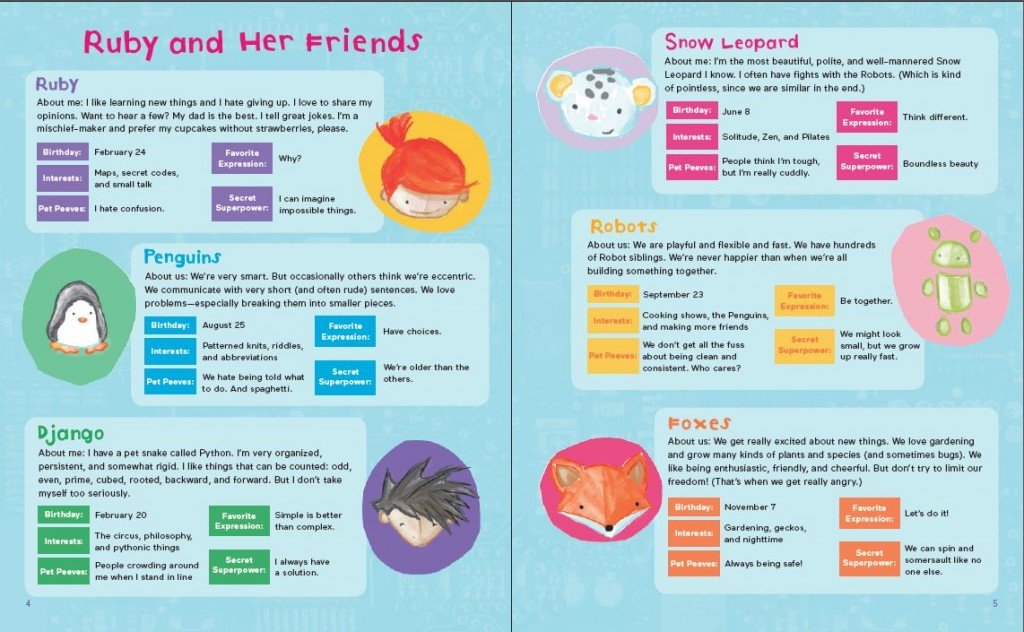 Hello Ruby is all about teaching young kids the building blocks of coding. The book is broken up into nine small chapters. There’s a fairly simple story-line: Ruby needs to find five gems her dad has hidden around the house. Ruby goes on her adventure and starts with a plan by making a map. She ends up in the imaginary world of the map (I was a bit unsure how she got there, but it works with the book). She meets penguins, a snow leopard, foxes, robots, and a young boy on this adventure. As she goes along she is doing things that are the basis of coding. 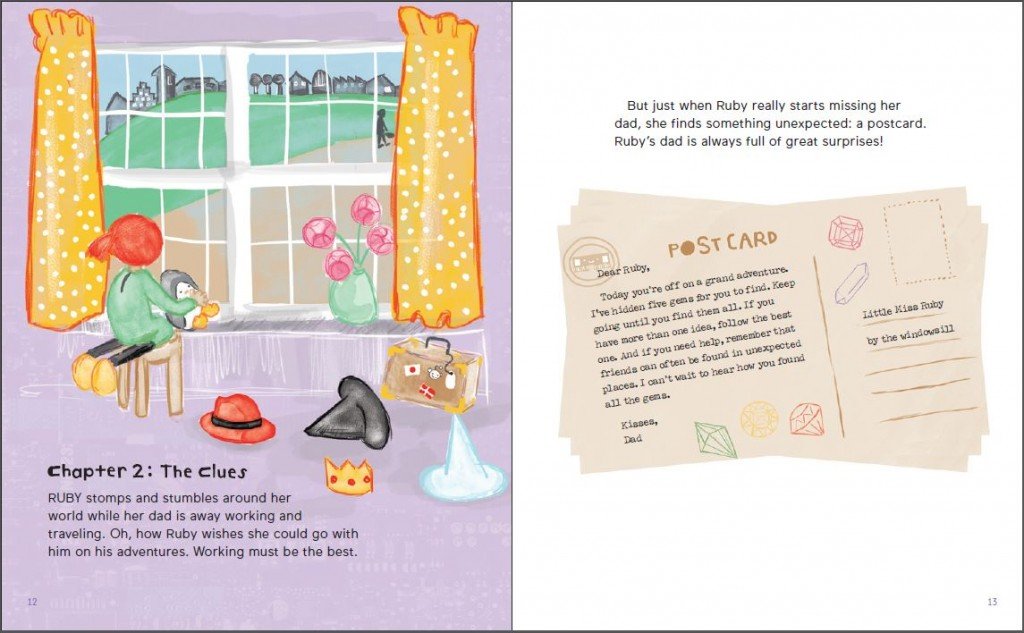 Immediately following the story there’s a thorough and fun activity section that would be done with a child and parent or teacher. The kids (and adults) can learn about the basics of coding, such as strings, sequence, loops, selection, functions, and more! It’s written simply and clearly for young kids to understand.
I loved the adorable illustrations and so will your budding coders! Liukas has a bright, cheerful and kid-like illustration style that complemented the story and activities well. I know it’s the teacher in me, but I’m partial to books that have a teaching element and since my husband is a software engineer, I’m also familiar with these concepts in their basic forms.

If children are young there is scratch.mit.edu. There are also good exercises at code.org. If the kids are a bit older inventwithpython.com has books that teach more “real” programming skills.
With Hello Ruby, Linda Liukas has done a wonderful job portraying and teaching simple coding concepts in an entertaining and hands-on way. I think her website helloruby.com should be added to my husband’s list too. The website has great information and helpful teaching tools, along with some printables. Although it’s listed online for ages 4-8, I’d recommend Hello Ruby for children ages 5-9 (or anyone who wants to learn some fun kids activities that have coding concepts). Happy reading and coding everyone!
– Reviewed by Lucy Ravitch