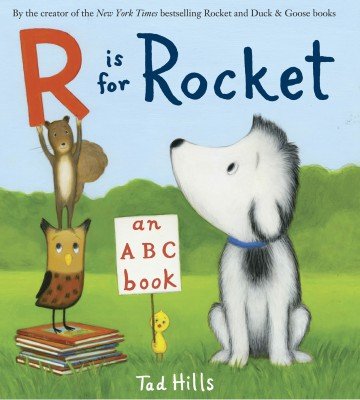 B IS FOR BEAR: A NATURAL ALPHABET
Written and illustrated by Hannah Viano
(Little Bigfoot/Sasquatch Books; $16.99, Ages 2-5) 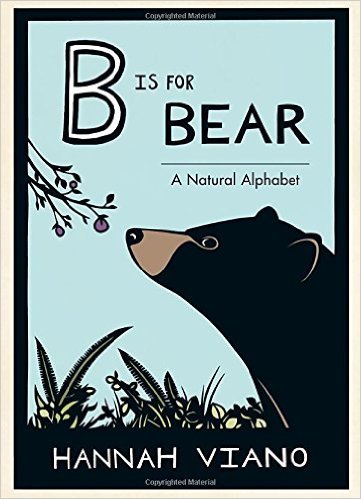 Hannah Viano dedicates her new alphabet book to “…all of those who let children run a little wild, climbing trees and splashing in puddles. It is worth all the laundry and lost mittens.” It is a delightful sentiment for a book that will inspire a strong appreciation for the natural world in readers both young and old.

The illustrations in B is for Bear are perfectly stunning. Although they appear to be woodcuts at first glance, the process is even more interesting. Viano uses a graceful papercutting technique, carving thick outlines from black paper with an X-ACTO knife. She then adds soft pastel colors digitally in a rich range from gold to olive to amethyst. The look is at once classic and contemporary, as the bold lines capture the energy and motion inherent in her natural subject matter.

The alphabet letters, upper and lowercase, are suspended at the top of each page, punched in a white font onto the thick black border around each illustration. The natural keywords that she selects range nicely from animals (J for Jackrabbit) to natural objects (P for Pebble). Below the bottom border Viano provides clear but poetic descriptions as well as a few additional fascinating facts. For example, from L for Lightning Bug, “Call them fireflies or lightning bugs or Lampyridae. They fill a summer night with magical lights.”

Viano adeptly shows natural objects of all sizes, from massive mountains and soaring waves to tiny dandelion puffs and Queen Anne’s lace florets. The variety keeps the A to Z alphabet format interesting and surprising, with a fair mix of unusual versus familiar subjects for children. The book as an object itself is lovely, with sturdy proportions perfect for small hands. The pages are printed on thick, smooth, semi-matte paper that lends a sophisticated, organic feel.

B is for Bear, and for book, beautiful and breathtaking!

Where Obtained:  I reviewed a copy of B IS FOR BEAR from the publisher and received no other compensation. The opinions expressed here are my own.

ABC UNIVERSE IS OUT OF THIS WORLD!
by the American Museum of Natural History
(Sterling Children’s Books; $7.95, Ages 2-5) 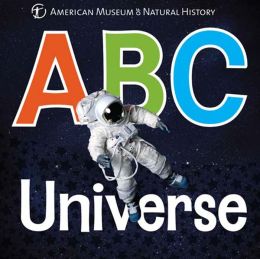 Bring Nebulas and Supernovas into your child’s bedroom with ABC Universe, the latest in the AMNH board book collection. Your budding astronomer will thoroughly enjoy this new, oversized (10 X 10) board book created in partnership with the American Museum of Natural History. Kids will take a trip to outer space while learning about everything from an Astronaut to a Zenith and lots more in-between.

M
Moon
The Moon is the only natural object
to move around Earth. It is also the
only other world in outer space
that humans have ever visited.

Added features include extra large letters that youngsters can trace with their fingers. This design also assists with visual memorization as children flip through the pages again and again. There are several easy to understand descriptions in every spread. Actual photographs fill colorful, sturdy pages in this entertaining exploration of the cosmos just right for introducing early learning concepts to preschoolers.