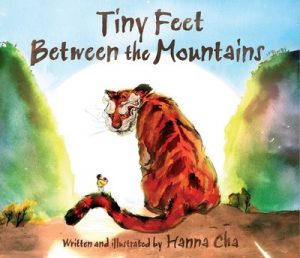 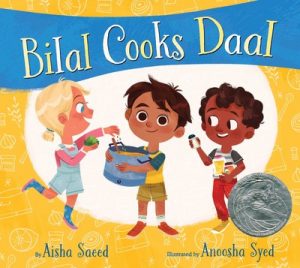 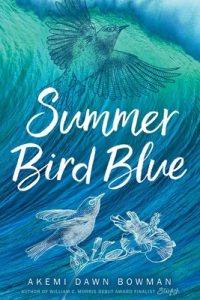 Summer Bird Blue by Akemi Dawn Bowman opens with a car crash. Seventeen-year-old Rumi Seto loses her only sister Lea, who’s also her best friend. Their mother, unable to deal, puts Rumi on a plane to Hawaii for an indefinite stay with Aunty Ani, their Japanese-Hawaiian side of the family.

Every April during National Poetry Month, we like to share some poetry books we hope children will enjoy reading, ones that perhaps will pave the path towards a greater appreciation of poetry. The books don’t have to be in rhyme although our littlest readers do love the sound of cats and bats and rats who wear hats. If you’re interested in exposing youngsters to all different kinds of poetry, consider the following picture books and also ask your librarian for suggestions or head to your local independent bookstore today. 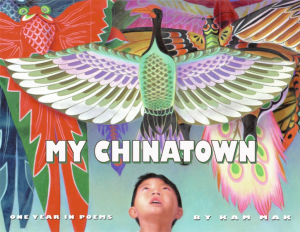 My Chinatown: One Year in Poems
Written and illustrated by Kam Mak
(HarperCollins; $6.99, Ages 4-8)
Reading My Chinatown allows to us experience a young boy’s adjustment to New York’s Chinatown after moving there from Hong Kong. This realistically illustrated (at first I thought photographs filled the book) story is divided into seasons beginning in winter and ending again in winter, a full, activity-filled year later. We see the boy not enjoying his new country’s New Year celebration. Instead, he spends time reflecting on his grandmother’s pickeled kumquats back in Hong Kong. All the while the narrator wonders, “But how can it ever be a good year thousands of miles away from home?” His feelings of detachment are strong. Always thinking of his former home, the young boy resists learning English, wanting to cling to his comfortable past rather than risk moving forward. Being given a board game like the one he had at home marks a turning point in the story. From the calming rhythm of his mother’s sewing machine, to a dragon boat race in Queens, from the familiar sound of mah-jongg tiles “slapping the table”, to making new friends, as the seasons pass, the narrator is starting to feel at home. And, at last, taking part in the following New Year’s festivities, it’s clear that he finally feels that Chinatown is where he belongs. 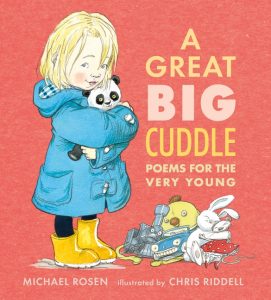 A Great Big Cuddle: Poems for the Very Young
Written by Michael Rosen
Illustrated by Chris Riddell
(Candlewick Press; $19.99, Ages 3-7)
It’s never too early to read poetry to children. And Rosen, a former UK Children’s Laureate sure knows it! In this accessible and varied collection of over 30 poems, there’s something for everyone including silliness and seriousness, sounds and interactive play. Young children are going to find themselves asking for these fun, often humorous poems to be read over and over again. Without even realizing it, kids’ll learn animal sounds, emotions, counting and some clever puns – read I Went to see what I mean – while appreciating the punchy rhymes, fast pace and kid-oriented topics. Current UK Children’s Laureate, Riddell, has provided artwork that feels more like the prolific illustrator Shirley Hughes than the Riddell illustrations we’ve seen accompany other  children’s books. His range and talent are showcased in this collection that begs to be on little ones’ bookshelves. 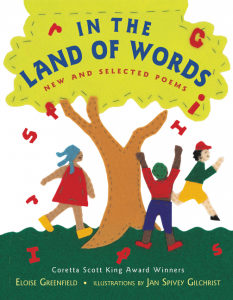 In The Land of Words: New and Selected Poems
Written by Eloise Greenfield
Illustrated by Jan Spivey Gilchrist
(Amistad; $6.99, Ages 4-8)

Visit “The Land of  Words” with NCTE Excellence in Poetry for Children Award Winner, Eloise Greenfield. She’ll take you and your children through pages of inspiring poems as her lyrical language rains down on you and waters the soul. With over 20 wonderful poems in the collection, In The Land of Words felt like a mentor’s embrace, a call to action to create and an urging to just soak up every moment.Greenfield was spot on, if you can say that about a poem, in both rhythm and description of the patience involved when fishing in To Catch a Fish. I particularly enjoyed Making Friends about how something as simple as making a silly face can be the start of a friendship. Flowers is a touching tribute to stepparents. This one shares the pride and love a stepfather feels at his stepdaughter’s solo performance. Books, Story, and Poet/Poem will speak to readers and writers everywhere. This line, from books, especially resonated for me, “New faces and new voices, I listen and I see, and people I have never met mean everything to me.” If you love words, don’t miss this collection complemented by Gilchrist’s multi-media artwork that includes felt, embroidery and what looks like markers, making this book all the more satisfying. Overall I found myself quite enchanted by the cleverness from start to finish.