RENATO AND THE LION
Written and illustrated by Barbara DiLorenzo
(Viking BYR; $17.99, Ages 5 and up) 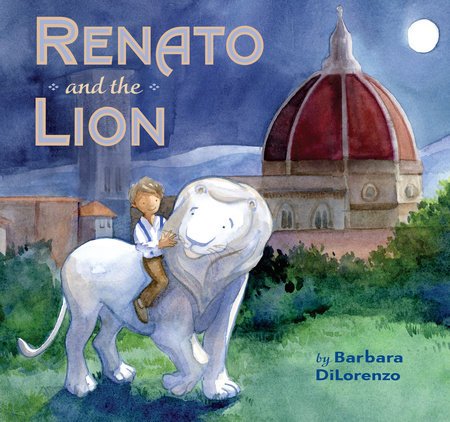 HAPPY BOOK BIRTHDAY TO RENATO AND THE LION!

Barbara DiLorenzo’s historical picture book, Renato and the Lion, captures a young boy’s fondness for a stone lion. The story is set during World War II and Renato’s father cares for sculptures in a museum. When foreign troops arrive in Florence, he safeguards the art in brick enclosures. However, Renato’s beloved sculpture resides outside in the Piazza della Signoria where he likes to play soccer with his friends. Using some spare bricks, Renato tries to protect his lion too, but falls asleep while hiding from soldiers. The lion magically transports Renato home.

Years later in the U.S.A., Renato shares this tale with his granddaughter and soon after travels to Italy where he is reunited with his long-lost lion—a reminder that powerful connections with pieces of art transcend continents and generations.

DiLorenzo’s beautiful watercolor paintings bring Renato and the Lion to life. This visually stunning story enchants as it gently educates. The emotional resonance evokes a timelessness that will charm children with its quiet and heartfelt message.

YEAR OF THE JUNGLE:
Memories From The Home Front
Written by Suzanne Collins
Illustrated by by James Proimos

Resharing a post of this special picture book and honoring all those who have served our country on Veteran’s Day.

On the eve of Veteran’s Day 2013 (once known as Armistice Day) readers will appreciate having Suzanne Collins’ Year of The Jungle: Memories From The Home Front to share with youngsters. Finding an appropriate story that deals with war or a parent’s absence for any reason is not always easy to find. Collins’ picture book, based on her own childhood, is more than appropriate. It’s moving, meaningful and makes me so very thankful for the sacrifices of our military. Veteran’s Day isn’t about the shopping, or the sales, it’s about honoring all service men and women and supporting their families.

Year of The Jungle does just that. The Hunger Games author pulls from her past and uses little, red-headed Suzy as the narrator. Suzy says we’re all something special from Rascal the cat, Kathy the oldest sister, Drew the only boy, to sister Joanie, the only one with “brown eyes like my dad’s.” He’s gone off to a war she doesn’t understand and through her eyes we learn how frightening it is for a child when they don’t have all the details.  What really hit home for me is that Collins has written about the Viet Nam war, a war I grew up with and also did not completely understand. Suzy’s been told her father will be gone for a year, but wonders how long is that?