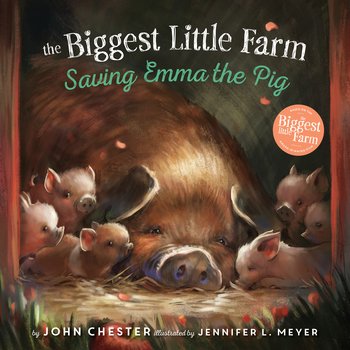 Last month I had the good fortune to see the delightful documentary, “The Biggest Little Farm” and I’m not kidding when I say my husband thought I’d immediately head home to don overalls and work boots after the film had ended. Yes, I was that enthused but I’d also like to add that you don’t have to have seen the film to appreciate this farm story or the real life characters in Saving Emma the Pig reviewed here today.

Saving Emma the Pig, an utterly adorable 40-page nonfiction picture book just recently released, is going to win fans and perhaps even inspire future farmers and vets once in the hands of young readers. “Based on the award-winning film” by documentary filmmaker John Chester about bringing Apricot Lane Farms to life in Moorpark, California, Saving Emma the Pig is the first in a new series of children’s books. Each book, narrated by Chester, will capture a unique and engaging tale of an Apricot Lane Farms animal and “the special people who care for them.”

Chester’s debut story recounts the true events about a particularly personable and apple-loving pig named Emma. Not just a new arrival at the farm, Emma also happens to be pregnant, and ill. Chester is determined to get her well again so she can properly care for her piglets. The premise here is quite simple yet also powerful, selflessly give love and devotion and it’ll come back to you tenfold. And that’s exactly what Chester, his wife Molly and his team set out to do.

Everyone expects Emma will have a fairly normal sized litter but when she goes into labor, the piglets keep coming. It doesn’t even stop at a dozen. Nope, seventeen piglets are born, close to a record number and quite a feat for a sickly swine. But the poor hog isn’t producing milk so the newborns move into Chester’s “teeny-tiny” farmhouse where they can be looked after while hopefully Emma recovers. There’s just one problem and it’s rather a big one. Emma has no appetite and in order to get better she must eat.

Perhaps offering Emma apples is the way to get her back onto her feet. When this solution doesn’t work and Chester is at his wit’s end, there’s just one last thing to do to save Emma, bring back the piglets. Clearly they were missing their mama and she was missing them because, once reunited, Emma’s health and spirit improve. Together again, Emma and her piglets thrive with the piglets eventually growing up and moving into their own pasture.

It’s here both in art and text that Chester introduces another farm animal, Greasy the rooster, who bonds with Emma. This unlikely and funny friendship is setting the stage for what is sure to be the next book in the series. Meanwhile, John and Molly figure if Emma can handle seventeen little ones, surely they can “raise one of our own,” and an addition to the Chester family is also depicted.

Artist Jennifer L. Meyer’s illustrations are so good that I cannot picture anyone else’s working as well. There’s a warmth that emanates from every page and brings Chester’s charming narrative to life. In the second spread we even spot Greasy taking up much of the left hand page as he watches Emma from a distance following her arrival. I also like that she’s added bees in her artwork. Another spread, with the piglets splashing, burping and slurping in the Chester home, shows Molly and John just outside a window wondering how they will cope with the litter and worrying if Emma will recover. An author’s note on the last two pages details the origin of Apricot Lane Farms, tells a bit more on Emma who now weighs in at seven hundred pounds and includes acknowledgments as well.

Bring the Chester family and the animals of Apricot Lane Farms into your life today. Share the Biggest Little Farm stories with your family to enter the wonderful world of bio dynamic farming where humans and nature are interconnected, helping us to learn about more about ourselves and the world around us.

Read more at the links below: 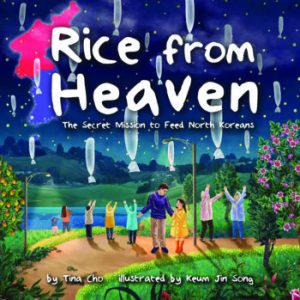 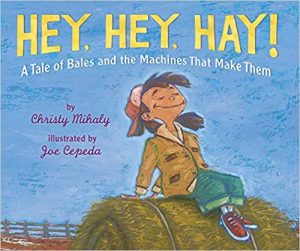