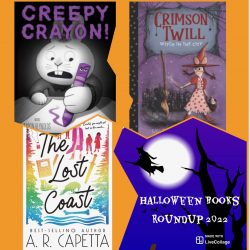 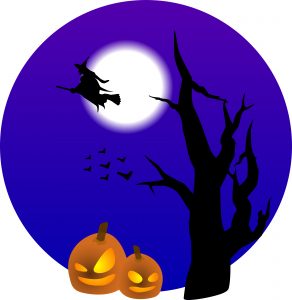 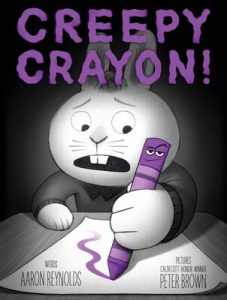 Aaron Reynolds delights us with book three of the Creepy Tales! series featuring his beloved Jasper Rabbit. In Creepy Crayon! Jasper’s not-great day gets a boost when he finds a bright purple crayon—with a crazy grin on its face! Soon, the crayon is helping Jasper zoom his grades up to straight As. Cool, right? Maybe . . . until the crayon takes BFF to the next level.

As in the first two books, Peter Brown’s art is a perfect blend of funny and spooky: Crayon’s glowing antics contrast with the lurking shadows. Kids will love the hilarious expressions on Jasper’s face.

Flawless interplay between text and high-contrast art make this author and illustrator duo New York Times best-sellers. Fans will appreciate the can-you-spot-them references to Creepy Carrots! and Creepy Pair of Underwear! We own this outstanding three-book series and do not tire of them; they’re a fit for Halloween or any day you need some funny bunny in your life. 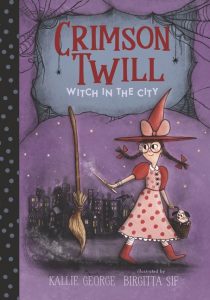 The chapter-book series opener, Crimson Twill: Witch in the City, by Kallie George will bewitch you with its main character, spunky little Crimson Twill. True to her name, Crimson rocks a big bow on her red witch’s hat—no standard black for this girl! Her clothes and actions also set her apart. But, the various ways she’s different from others don’t bother her at first.

With Mom just a wave of her wand away, Crimson sets off to explore the big Broomingdale’s department store where the elevator’s buttons are shaped like what’s sold on that floor. Crimson hopes to get a glimpse of those things called puppies. Instead, she immediately encounters disdain for her unique attire, creating a crack of doubt in her self-assurance.

The clever puns, humor, and heart make this book a standout. Illustrations by Birgitta Sif add an array of fun, diverse witches. Kids new to reading will appreciate the short, simple chapters that are engaging and fast-paced. For this age audience, navigating a large store truly is an adventure. And any place with a cat floor is alright by me! Crimson ultimately finds that Broomingdale’s does have “everything a witch could itch for” but what she end up with may surprise you! 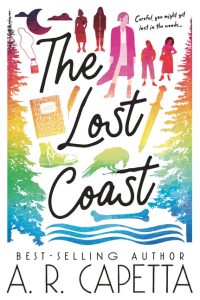 The beautifully written YA, The Lost Coast, by A. R. Capetta grabbed hold of me with its opening lines describing Danny’s first glimpse of ancient redwoods. She and her mom move to this specific coastal northern California town because Danny has been mysteriously drawn there. Danny quickly finds herself in deep with a group of queer high school witches who call themselves the Grays. They’re awesome, but their most powerful member is missing and they expect Danny to find her.

Nonlinear narration and alternating viewpoint chapters heighten the suspense as we try to understand what’s really going on. The foggy forest gives nature a presence on the page and sets the mood for magic, secrets, and discovery. This book is an A+ for me because of its realistically complex and interwoven friendships and love, plus the group’s frank discussions about identity. Ideal for fans of The Graces novels. I highly recommend The Lost Coast to YA readers who enjoy clever, twisted tales that are atmospheric gorgeously crafted. Available in hardcover, paperback and Ebook.