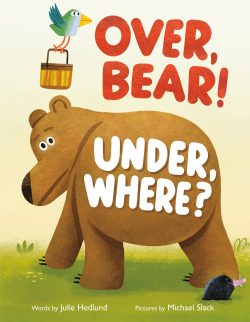 OVER, BEAR! UNDER, WHERE? 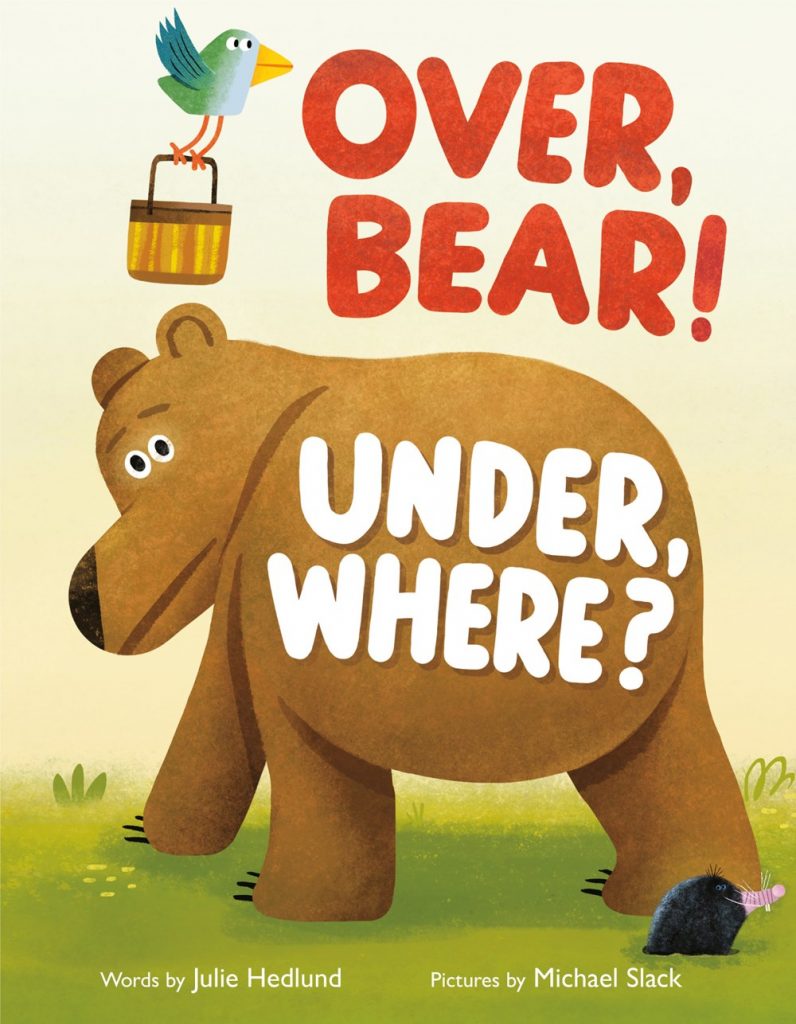 For the last day of Fat Bear Week, I’m delighted, (or should I say overjoyed?) to share my thoughts on Julie Hedlund’s uproarious read-aloud picture book, Over, Bear! Under, Where? with humorous art by Michael Slack.

Now don’t get me wrong, the titular Bear may be on the big side, but he’s actually a kind soul simply looking for pals to play with. But when you’re a bird (Over), a mole (Under), or a hot-dog dog (Dog) and that much smaller, a bear can be scary. That scenario is what unfolds to hilarious results as Over and Under hang out at the park.

With wordplay galore, a relatable premise, and high marks for its readability, Hedlund’s book manages to entertain in just under 100 carefully chosen words. Young readers will adore the interplay of art and text as they see Over and Under’s punny back-and-forth banter on the see-saw and at their BBQ. They even invite a hot-dog dog called Dog to join them but run for their lives after spotting Bear in what is clearly a massive misunderstanding.

Bear, we soon learn, wants to play, too, but Over, Under and Dog do not realize this right away. It’s only when Under points out a dejected-looking Bear … down that the trio makes amends and in doing so, makes a new friend.

Hedlund’s spare text may make adult readers think, “Oh hey, I could do that.” When in fact, to be able to convey the emotional heart of this story with so few words, is no easy task and takes a pro. It also takes terrific illustrations that bring the story to life, my favorite illustrations being those below.

There’s even a page of helpful backmatter providing examples of the compound words that were essential to inspiring this story’s humor when they were presented as separate words helped by just a comma in many places. Parents, teachers, librarians, and caregivers will not tire of  sharing this whimsical, original tale with its clever take, “You can’t judge a bear by its behind.” So Fat Bear Week or not, this book’ll keep you from hibernating.