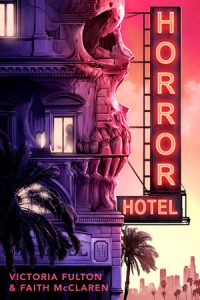 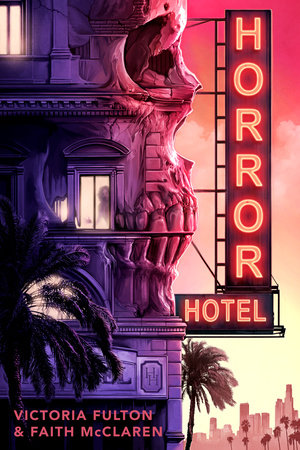 e
e
Get ready to be scared from the moment you peek between the pages of Horror Hotel by the award-winning cowriting duo Victoria Fulton and Faith McClaren. What would the teen foursome who calls themselves the Ghost Gang do to reach one million YouTube subscribers? Maybe push some boundaries, maybe break some laws, and hopefully not get killed in the process!
Chase knows they need more than their usual documentary-style paranormal huntings, so he seeks something spooky but seemingly harmless. The plan he proposes involves sneaking out to spend the night at an infamous Los Angeles hotel. Once there, they’ll secretly film after dark, investigating the unsolved death of Eileen Warren. The Ghost Gang hopes to have it all covered: Chrissy sees ghosts, Kiki is TikTok famous, and Emma brings her skepticism. However, they soon discover their talent and experience may not be enough to survive the evildoings that await.
The fast-paced suspense will keep you turning pages. Told in short chapters, viewpoints alternate between all four teens. Eileen Warren’s blog posts (leading up to shortly before her body was found in the elevator shaft) are interspersed, adding another element of intrigue.
While romance surfaces throughout the story, the importance of true friendship anchors the story—captured in all of its imperfections. Chrissy can also sometimes hear people’s thoughts, which adds an interesting element when those moments of unfiltered honesty surface. Yet, as cool as her abilities seem to others, Chrissy often feels they are a curse because, “spoiler alert—there’s no otherworldly psychiatrist to help your cope with all the dead people.”
I like how the Ghost Gang comes to realize that “sometimes, it’s the dead who need our help—and the living we should fear.” So dim the lights and channel your inner sleuth to see if you can solve this gruesomely fun whodunit.
e