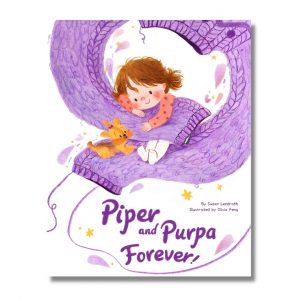 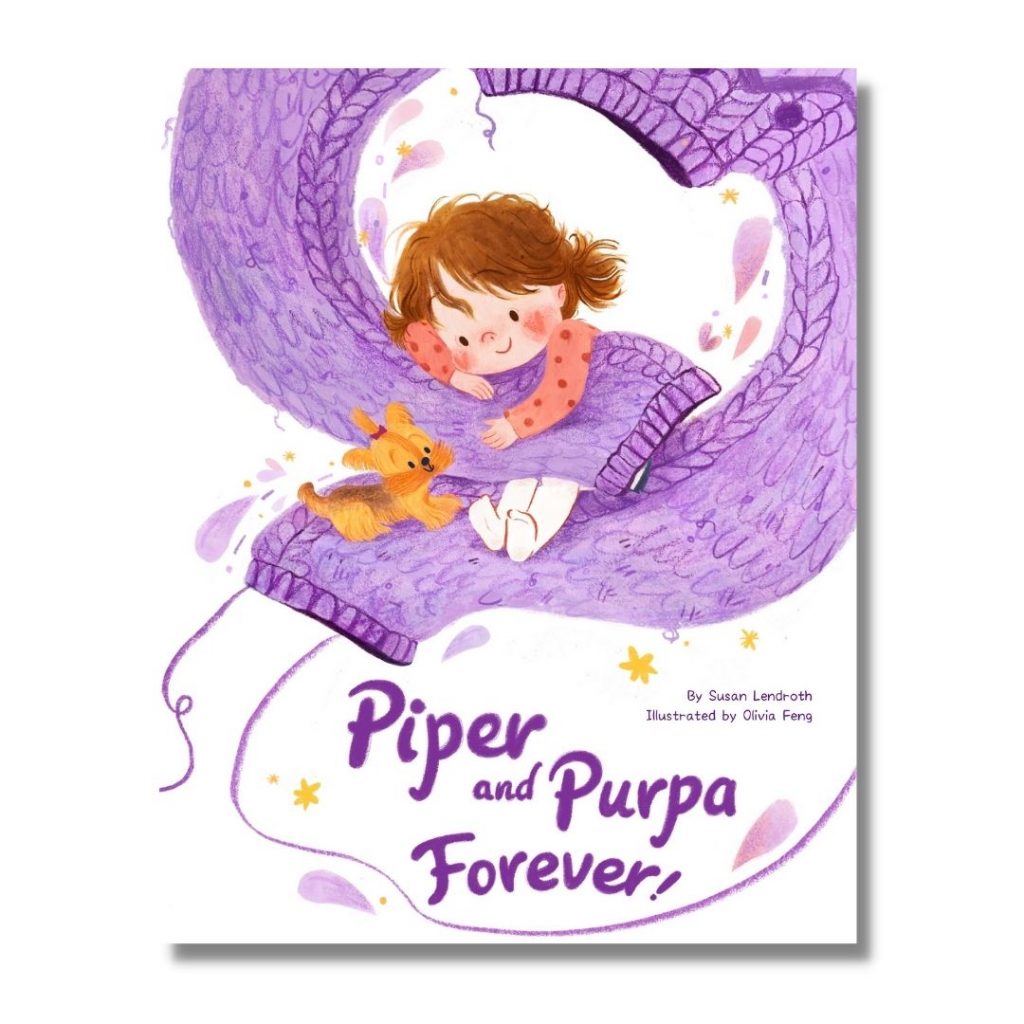 Author Susan Lendroth says her daughter’s childhood love of the color purple inspired her latest picture book, Piper and Purpa Forever!, with illustrations by Olivia Feng. I’m glad to know of another person as passionate about purple as I am. In fact, the cover’s design and colors alone would convince me to pick up this book. The bonus is that this is a well-crafted story on a topic that will resonate with young readers

The story revolves around Piper who adores a particular hand-me-down purple sweater. Unable to pronounce the word purple, the little girl says “Purpa” so from then on, that’s the name used for the sweater.  Though it’s way too big at the beginning that doesn’t matter to Piper.  Much like a beloved doll, stuffed animal, or blanket, Purpa comes everywhere. Eventually, Piper grows into her sweater which is great … for a while.

But when Piper’s sweater barely covers her belly button, there is no avoiding the reality that with every new day she is outgrowing Purpa. One of my favorite illustrations is when Piper is on her bed trying desperately to pull the sweater down. Her parents and relatives peek through her bedroom door knowing the inevitable has happened. The worry on their faces shows as they wonder what will happen next. Feng’s artwork, done digitally, has a childlike charm and looks like a blend of crayons and pastels. The colors are soft like Purpa and full of movement and emotion.

Everyone suggests what can be done with the now too-small Purpa. Piper’s dad thinks donating it to the school rummage sale is a good option but that’s met with resistance. Unraveling it and knitting a hat instead is her aunt’s idea. Nope! That doesn’t cut it. But her grandfather’s suggestion of using Purpa to polish his car, sends her running from the room in a rage.

Determined to keep Purpa as her special piece of clothing, Piper pushes her luck and puts it on, though not easily. To remove the sweater later in the day she must go through a series of uncomfortable maneuvers. The frustration is palpable in her expressions as the thought of parting with Purpa is becoming a sad reality. So when Dad brings home a plush koala, it doesn’t take long for Piper to come up with a clever way to keep Purpa close at hand.

Many parents will relate to Lendroth’s sweet story of how children often get attached to a special item and cannot accept letting it go. Piper and Purpa Forever! also allows them to use the book to broach the subject of growing up and how when using a little imagination and sometimes repurposing, those objects of childhood affection can find new ways to bring joy into their lives. When I  asked author Lendroth what she felt the takeaway was, she said, “I think the most important takeaway is that growing up doesn’t always mean leaving things behind, that you can adapt and still move forward. Or maybe the important thing is it’s ok to be really really really attached to something!”