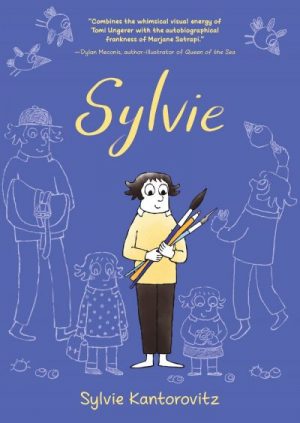 Written and illustrated by Sylvie Kantorovitz 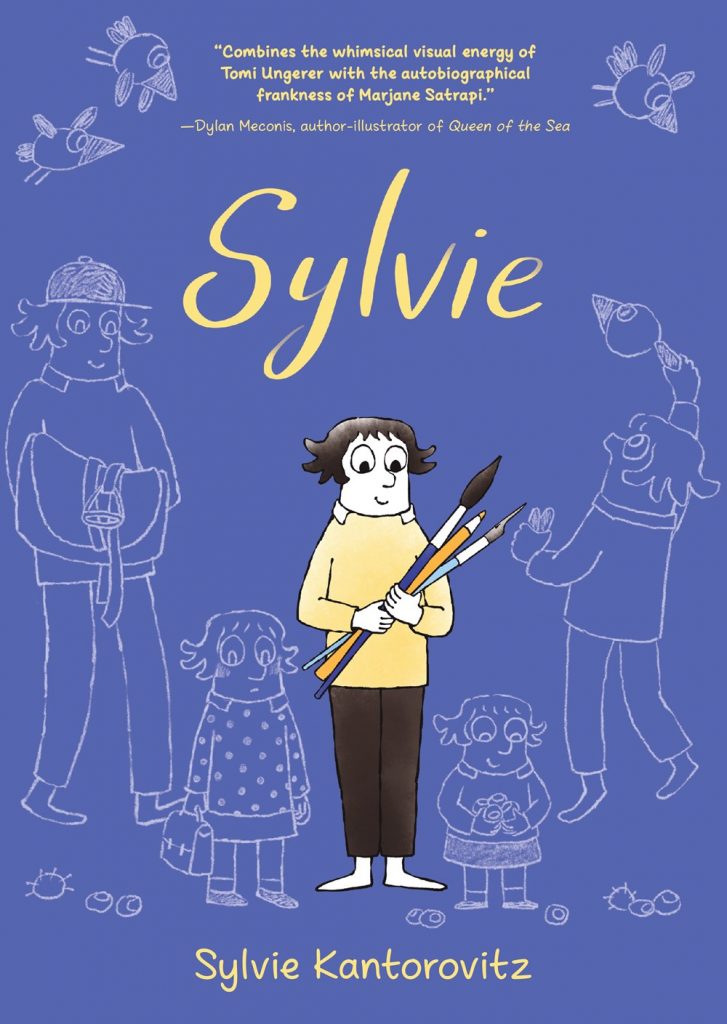 As we approach the one-year anniversary of Sylvie’s publication, I had to share an overdue review of Sylvie Kantorovitz’s memoir that I only recently read. I’ve been playing catch-up following an extremely busy year during which I couldn’t help but notice how many excellent graphic novels were released.

Sylvie Kantorovitz’s compelling middle-grade graphic novel memoir about growing up in the late 1960s and 1970s France was just the book I needed to read last week. It didn’t hurt that I’m a Francophile, but even readers who don’t know the first thing about life in France will finish Sylvie feeling much more familiar with it.

While Kantorovitz didn’t set out to write and illustrate a memoir (per her Author’s Note), memories of her childhood rose to the surface during her initial approach to drafting the novel and soon her own story took on a new life. Her candor, ambiguity at times, and relatability are what make Sylvie so rich, like the perfect crème brûlée or éclair au chocolat. Add to that her irresistible artwork (including maps which I adore, translated words to help non-French speakers, and other charming details such as chestnuts at the end of every chapter/section) and you have a novel as fresh and real as any contemporary one.

As a young girl whose family came to France from Morocco, Sylvie had to deal with anti-immigrant attitudes as well as anti-Semitism being the only Jewish family where she lived. And where did she live? Well, that’s another aspect of the novel that makes it stand it apart. Sylvie’s father was a principal at a men’s teaching college so the family was given housing on campus. The vast grounds of the school suited kids like Sylvie and her younger brother whose imaginations meant there was never a dull moment.

Growing up, Sylvie faced the same dilemmas kids face today whether that’s friends moving away, friends you have doubts about or friends you crush on, frustration at sharing a bedroom, fitting in, finding your passion, and figuring out what you want to do the rest of your life. On top of that, when Sylvie’s father changed jobs, Sylvie’s family moved away from the teaching college to a city closer to Paris. While that meant leaving behind lovely memories it also meant new opportunities.

What I loved most about Sylvie was how introspective she was. She knew how much she loved looking after her brothers and sister―we see her family grow from one sibling to three―and other young kids. Maybe I’d be a good teacher she wondered. She thrived on alone time in her room doing art and taking outside art classes. Maybe I could be an artist but could I support myself that way? And she continually wondered what she would do in the future when her peers seemed to know exactly what their path in life was. She did not like the pressure she felt from her mother to either find a rich man to marry or pursue a career in a field that didn’t interest her. She was nurtured by a caring, inspiring father and confused by a moody, often angry mother while she navigated the important coming-of-age period of her childhood. The scenes when her parents argued and the question of the big “D” or divorce arose is something many readers will understand. When she once asked her father why he didn’t leave her mother he said he loved her, something Sylvie found difficult to fathom.

I expect many readers will enjoy reading about Sylvie’s quest for independence. Like when she finally gets a room of her own by moving upstairs to an unused storage room in the college building where her family lived. Whenever Sylvie had opportunities to study and practice art, the joy jumped off the pages right into my heart. Moments like those, captured so lovingly in the cartoon-style artwork and text, brought Sylvie’s experiences to life. I hope readers will find relevance and comfort in Sylvie’s honest and heartfelt story. The book is available in hardcover, paperback, and Ebook and is the reassuring read we could all use right now.