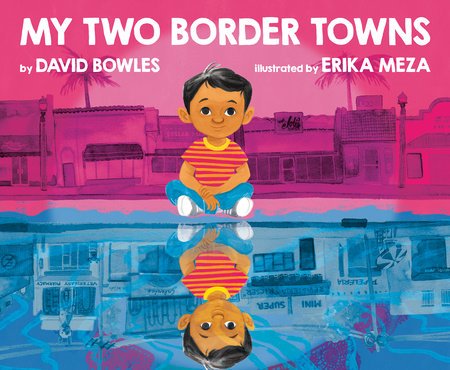 Two towns unite in a spirit of community, outreach, and transnational awareness through the compassion of a little boy and his father in David Bowles and Erika Meza’s My Two Border Towns.

As he does every other Saturday, a boy living in South Texas prepares for a trip with his father to “[E]l Otro Lado”–a short ride to the other side of the border. He grabs his “special bag” of gifts before they leave; while on the road, he reflects on the items he’ll be giving to his friends.

Once they’ve arrived, we see a warm and vibrant town, twin to the one where the boy lives, except for English which is “mostly missing” until  “it pops up like grains of sugar on a chili pepper.” Bowles’ fluid weaving of English and Spanish throughout the story also provides opportunities for further learning to those who want to dig deeper into the Spanish language.  Colorful and lively, Meza’s aerial and close-up illustrations of the setting are packed with details:  architecture, wall signs, street vendors, and facial expressions all have a story of their own.

Now that father and son are fueled up with breakfast from their favorite restaurant, it’s time to catch up with family and play a round of soccer. Grocery shopping and a visit to the pharmacist are next, but before they head home, Dad reminds his son of their last, “most important visit.”

Having all his supplies ready, the boy makes a quick visit to his friend who, along with a long line of people, is waiting, uncertain about the fate of his future. There are “entire families from the Caribbean and Central America. Refugees, Dad calls them. Stuck between two countries.”

The thought and care the boy has given to his gifts is evident as he unpacks them “explaining [his] choices” for each one to his friend.  Though his visit is short, it’s always bookended by love for his friends and a yearning for their freedom.

A must-have for caregivers and educators, My Two Border Towns opens doors to conversations about kindness, empathy, duty, and the complexities of immigration.